Legal or Not, Here We Come! 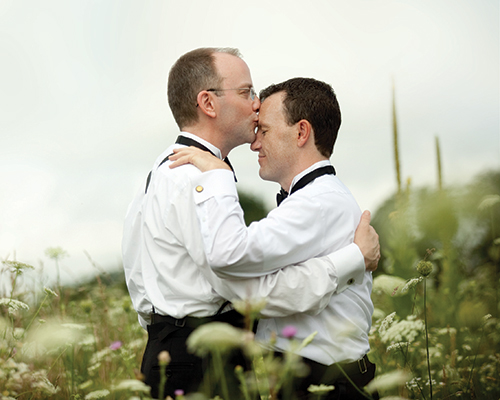 We met in February 2007. In autumn 2009 we decided to get married, and on July 24, 2010, we celebrated our marriage. Specifically, we said our vows near a pond and celebrated under a huge tent at the bottom of a lush valley hidden behind the bends of narrow country roads in southwest Wisconsin. But we weren’t hiding-in fact, we were being very, very out.

We don’t believe marriage’s significance is due to paperwork or officials; for us it is about openly—publicly—celebrating and sharing our love with family and friends. And being that big, that open, and that loving had some unexpected outcomes.

This is our wedding story.

It’s good for our relationship

Want to test the strength of your relationship? Plan a wedding! We had some difficult conversations and made tough decisions. We were forced to look deep inside to see what was really important—issues we might never have faced otherwise. We found planning such an important event together strengthened our relationship.

For example, soon after we decided to marry, we discussed whether we would use the words “wedding” and “marriage” or some of the popular euphemisms instead. Josh disliked—even resented—the word “marriage” since it wasn’t legally available to us in Wisconsin. Jay very strongly wanted to use the word: our relationship deserved the same status as anyone else’s. Also, we were going through all the steps any other couple would, such as making announcements, planning, spending (lots of) money, and celebrating our love for and commitment to one another in front of a large group of family and friends. If it walks like a wedding and talks like a wedding—it’s a marriage. It took time and a lot of discussion, but we eventually agreed to use these words unequivocally. Or so we thought …

We also had a lot of fun preparing for the big day: we worked well together and discovered each other’s strengths. Jay is a spreadsheet master and super organizer; Josh had a beautiful vision of how the day would look and feel; we both focused on our guests’ comfort, and turned the vision into reality. We also learned to let go of what was too much for our timeframe and budget. We now fully appreciate the value of planning and having a wedding—we confirmed that we have what it takes for a successful, life-long relationship.

It’s good for our relationships with family

“Let’s elope,” Josh suggested after a stressful night of planning with no end in sight. “So you want to go somewhere far away, where no one knows us, to do something that’s only legal in a few states anyway, so that our marriage wouldn’t really exist to anyone except ourselves? That’s called a vacation,” Jay responded. We had already decided that despite not having the same rights as straight couples, the one benefit of a wedding we could enjoy was the support and love of our families and friends.

We’ve both been out for years (Josh 16, Jay 23). While coming out to our families wasn’t easy, we are both very blessed that our families love us and support our relationship. Because of this, we wanted to make a big deal announcing our engagement to them. During three Thanksgiving meals in 2009 we announced to 85 people our plans to marry, to much applause and cheering. Having experienced anti-gay bullying early in our lives, it was an amazing experience that started our eight-month journey to a wedding many of those same people later described as “magical.”

Getting from announcement to the big day wasn’t always easy with family. We asked our parents to review the final draft of the invitation, to see if we missed anything. We got some helpful suggestions from Jay’s mom. Josh learned that when his parents read “… at the celebration of their marriage,” they found themselves caught between wanting to celebrate our relationship and staying true to their Catholic faith. If we used the word “marriage,” they asked that we not open the invitation with, “Together with their parents …” We felt disappointed, because we were then caught between our principles and honoring all four of our parents on the invitation the way we wanted.

We could have stubbornly stuck to our ideals and risked damaging our relationship with them. Instead, we chose the tougher path of attempting to appreciate their views and feelings. We drove to their home where the four of us had an uncomfortable, difficult conversation. While we don’t share their beliefs, because love is more important to us than one word in print, we offered to remove it from the invitation. This may not seem like a big deal to anyone else; for us this was a huge—yet worthwhile—sacrifice.

Fast forward a couple of months to the day all four of our parents hosted the rehearsal dinner for 80 people at the Feyen family farm. Beneath the tent he’d built using saplings cut from the farm, Josh’s father rang an old family dinner bell and made an elegant speech welcoming Jay to the family. He shared with guests how he and Josh’s mom had crossed many bridges to get to this point, conceding, “It didn’t hurt that much.” We were weeping with joy and immense love for two people who refused to let their beliefs get in the way of loving us. Through bleary eyes, we saw we weren’t the only ones brought to tears with joy. This speech set the tone for the rest of the weekend, allowing our wedding to become a vessel for many to experience fearless emotion, audacious acceptance, and unbridled love.

It’s good for the world

Our weddings (that’s the big LGBT “our”) require everyone to take risks. Guests risk facing fears and discomfort when we depart from familiar formulas of bride+groom and wedding/reception/dinner/dance/garter and bouquet toss. “What happens at a gay wedding?” “Are they going to kiss?” “Will it be uncomfortable?” “Will I be the only straight person there?” They may also have to come out as a guest attending a gay wedding. The more out we are in our lives, the more the people close to us have to make decisions about coming out themselves as a family member or friend of a gay person. For instance, we’re not the only ones who have to decide how to respond when someone assumes the gender of the new spouse (in-law, etc.).

We take huge risks having a wedding, since this requires our being vulnerable in ways we trained ourselves when we were younger. Now, instead of hiding who we really are, we show it proudly to the world; instead of hiding who we love, we walk through life hand-in-hand; instead of hiding what we’re feeling, we openly weep with joy and invite everyone in to share the joy and love with us. For us, our wedding became the single biggest contradiction to all those old hurts, which brought us deep and powerful healing. What’s the payoff of these risks for our guests? Our wedding ceremonies give straight and LGBT folks a unique opportunity to witness and experience love in new ways.

Have you ever arrived at a familiar destination and realized you didn’t remember any part of the drive? You were on autopilot. We think people have been to so many weddings that one flows into the next, leading to “wedding autopilot.” But when people received our invitation, they knew this drive would be different. While much of the route would be familiar, they didn’t know where the detours would be, which supported keeping them present and aware the entire day.

Some of these detours included our groom+groom formula, one of us having a best man and two women standing with him, and the other having two best men and a groomsman. No one was “given away,” we didn’t toss a bouquet or garter, and there was no telling who would lead the first dance. Even with these few differences, most of the day was familiar, which allowed our guests to be comfortable: there was a minister in front, they were seated by ushers, and we exchanged vows and rings. The love we shared was so clear during the ceremony that by the end it would be expected for us to kiss. It no longer mattered that it was two grooms getting married.

Another benefit? People saw an example of two gay men who don’t fit certain stereotypes when we committed ourselves to each other for life. The best way to destroy inaccurate stereotypes of gay folk is for people to see us and know who we really are.

One of our primary goals for the day was to be completely present. We freely shared our love, joy, and tears and it was contagious. In the days following, the comments and pictures that people posted on Facebook showed they felt it, too. Our photographer posted, “Attended my first gay wedding today. Needless to say, it was life-changing.”

At a family reunion two weeks after the wedding we were touched deeply when Jay’s aunt said, “You know, I’ve always understood intellectually how two men could love each other, but I never really got it until your wedding.” We have heard repeatedly that ours was the most beautiful wedding people had ever seen, and that it was “the social event of the summer!”

Josh’s mom later described her experience: “We were in this deep valley, and your love rose into the sky, and then showered back down upon us. Then someone else felt this deep and powerful love, and sent their love up into the sky, and it fell back down and showered on other people. It was an endless cycle of sending love up and having it pour down on the rest of us.”

Don’t dismiss the idea of a wedding simply because it isn’t condoned by church or state. If you want to commit your life to the one you love—GO FOR IT. The gifts you and your guests receive may be greater than you can imagine.