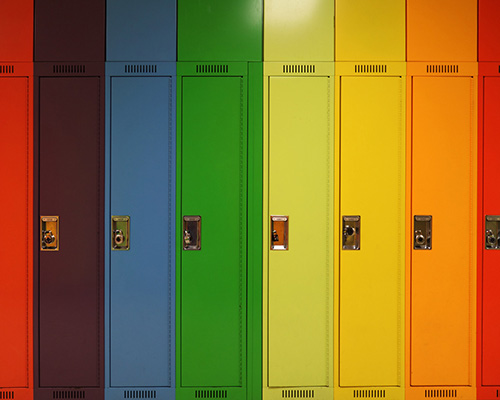 “We cannot count on intervention by teachers to protect or shield the children,” said Sunshine Jones at the United’s annual banquet in 1994. Jones was a founding member of the Madison Lesbian Parents Network and worked with Gays and Lesbians for Diversity in Education (GLADE). She and her partner Jo Ann Kelly were raising a child in the Madison schools. Jones cited cases of children being “subject to homophobic chants and slurs in school with instructors hesitating to halt them.”

The prior year gay advocates had presented Madison Superintendent Cheryl Willhoyte with a list of “Anti-Homophobia Strategies.” These included mandatory homophobia training for all school principals, the survey of library materials for LGB inclusive items, and harassment intervention training for playground/lunchroom supervisors.

The need to focus on students and not just educational employees was the second major work taken up by Madison area school-based gay groups. In part it was driven by the experiences of the students. Gay and Lesbian Educational Employees (GLEE) published a newsletter called New Lessons. One lesbian teacher wrote insightfully, “As a lesbian, I live over the edge of political society and the dominant culture. The students I teach are at the edge of the school culture.” The newsletter started to carry student tales from that edge.

In April 1993, “High School Student Speaks Out: Taking a few steps out” appeared.

It opened, “Throughout my childhood I’ve been a ‘tomboy.’ In my second grade picture I was wearing a plaid shirt with rainbow colored suspenders and jeans. I hated dresses and nylons.” Part of her education continued when neighbors moved in on the block, and it was two boys being raised by two moms. “I began to realize that I wanted to live a lifestyle such as theirs rather than the type of life my parents lived.” After seeing a gay pride parade in town, she recalled seeing “gays, lesbians, and bisexuals unafraid to show affection for one another, standing up for their rights and demanding more.” Thus, aged 15, she decided to go home and come out to her mother and found a very supportive response.

In April of 1996, LGBT school efforts erupted into a major Madison controversy. A photo essay exhibit called “Love Makes a Family: Living in Gay and Lesbian Families” had been prepared by Gigi Kaiser of Amherst, MA. A heterosexual teacher heard about the exhibit at a conference and asked to bring it to Madison, specifically to Hawthorne Elementary on the East Side. School District administrators were concerned it showed only one kind of family. A teacher at Hawthorne said the excuses from Downtown “didn’t fly with her. Schools often pay special attention to certain groups in society,” noting Hispanic Heritage Month, Black History Month, and posters of famous women.

When asked by a reporter, School Board President Carol Carstensen gave the exhibit a thumbs up from what she had heard about it. “One of our responsibilities as a school district is to reflect the diversity in the community.” A member of the Lesbian Parents Network at one point estimated that at least 200 district children lived in gay or lesbian households. This was surely a grave under-reporting. At a school meeting one parent said it was “a polarizing issue.” Tim Valdez, a fourth and fifth grade teacher, saw the exhibit as protection. “I have witnessed students picked on because of the perception they were gay or lesbian.” One press report said the exhibit “has become a battleground for those with strong feelings on either side of the debate over the acceptance of homosexual families in society.” A GLADE spokesperson said the school district administration had failed to lead. The school principal worked out a deal that the exhibit would go up for the planned two weeks but educational alternatives would be provided for parents who did not want their kids to see the show.

Nevertheless, the next Madison School Board meeting saw a rehash of the issues. Fifteen people spoke in favor of the exhibit and nine against. The record included a letter from Diane Reistroffer, a pastor at University United Methodist Church. She wrote, “I consider the District’s contention that the essay discriminates against heterosexual families phony and ludicrous.” Mary Babula’s statement commended the “heroic teachers and community leaders at Hawthorne.” On the other side outspoken firefighter Ronnie Greer, who became a well known LGBT community opponent, called homosexuality a deceitful and wrong practice. The Board took no action against the exhibit.

Editorials in The Capital Times pointed fingers at the “bumbling school administration.” Noting that they “are literally filled with images of heterosexual parents,” to censor gay and lesbian parents “sends an insulting and despicable message.”

Outside of Madison, one of the most moving pieces from this period also was re-published in New Lessons, a reprint from a Dane County high school student paper. It opened, “Dear Editor: I’m sixteen and gay. That’s right, queer as a duck. A fairy, homosexual, homophile, fruitcake, cocksucker, whatever you want to call it, that’s what I am. And I’m not the only one.” About the students in his school, he noted, “Have they ever had a choice but to accept the heterosexual norm? I had none.”

He continues, “I’ll never have children; I won’t be allowed to adopt. I’ll live in fear of gay bashers, face ridicule of my lifestyle every day. I’ll be a reject of society, a monolith of immorality in our perfect America.” Clearly the letter shows that, at the least, school was producing articulate, powerful writers.

The student, like most in the state’s educational systems, seemed totally unaware of any effects from the existing legislative protections enacted in 1993 under Statute 118.13 that protected K–12 students from discrimination (including bias, stereotyping, and harassment) on the basis of sexual orientation. Department of Public Instruction administrative rules required school boards to annually provide public notice on such pupil nondiscrimination. Today, groups such as GSAFE and the gay-straight student alliances have made many schools a very different place.

Yet, while not finding such a safe environment, the student of the nineties writes of his sexual orientation: “But I wouldn’t trade it for the world. I have dreams of high fantasy, dreams of the perfect mate, dreams of pleasant days and blissful nights, dreams that far outweigh the consequences of my sexuality. Dreams that I will make a reality….”

Building this future was not to be his work alone. To the school community he wrote, “It is your duty as Americans to stand up for the rights of homosexuals, rise out of your homophobia and accept us on the basis of the dreams we share and the hopes we realize.” Surely a great recipe for safe schools!