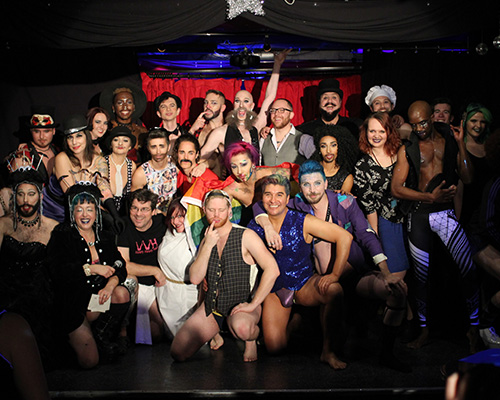 In a first for the state, the Wisconsin Burlesque Association in November hosted the inaugural Wisconsin Male Burlesque Festival at FIVE Nightclub. Over the course of two nights the event showcased top-notch performances, brought in packed houses, and raised $1,300 for the LGBTQ OutReach Center of Madison.

The Male Burlesque Festival featured sensual and comic male performers, drag kings, magicians, and all queer kinds of gender blending. There were Wisconsin staples OD Kimani, Baby Bear, and Anthony Savage, the Manscape troupe from the Quad Cities and many more. Headlining performer Waxie Moon stunned the crowd with two flamboyant acts he performed at the Burlesque Hall of Fame in Las Vegas. The two nights at FIVE were heavily attended and ran smoothly thanks to the work of volunteer stage managers, stagehands, ushers, ticket takers, and tip collectors.

Despite WIBA’s preparation the success of the festival was not always certain. From a production point of view, an all-male show was a risky choice: it went against the popular idea of burlesque and was harder to market. So the festival was two years in the making. WIBA had to become more established before taking on the project and in that time the concept expanded: “I think at first Mercury had the intention of opening it to men only,” said Baby Bear, the one of the festival’s MCs. “I thought ‘that’s bullshit: It’s not fair to do a show that excludes the women who built the ground that we get to perform on.’ So that’s when the whole idea of a ‘male centric’ [show] came about.”

Despite this decision, WIBA had to contend with seemly exclusionary language of “Male Burlesque Festival” and the need to focus on masculinity. Mercury was quick to clarify both points: “masculinity is a wide, varied spectrum but we don’t necessarily embrace that side of our society. The reason why we opened [the festival] to all gender identifications…is that we wanted to showcase all the various types of performers even though they’re inside the [show’s] masculine theme.” 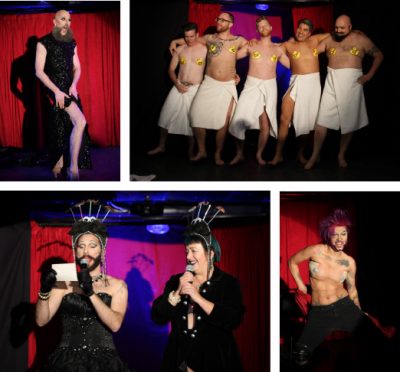 Mercury’s catch phrase is that men are guests in the burlesque art form, which was built by women in the late 19th century and sustained by women till the 1970s. Male performers did grace the stage from time to time and male drag was a frequent choice for burlesque divas. But in historical studies most men are relegated to the comedians who entertained between acts, the audience members, or the producers and theatre owners who ran life behind the stage.

This lack of firm history is both destabilizing and liberating for today’s male performers. While their numbers are growing men are still an industry minority, which carries certain advantages. “I go onstage and I’m absolutely different.” Mercury said. “And because we’re different we’re going to get booked a lot even if, or in spite of, being mediocre. [Men can] not wear pasties, not [have show-ready costumes], not do the things that women need to do to get into the industry, and get ahead. That undercuts women’s performances. So that means that we must be advocates for women.” This advocacy appeared in the festival in an unmistakable form: all male performers wore pasties to show solidarity with female performers, who must wear pasties in most venues.

While there may be a tendency towards mediocrity in among male performers, that was not the case with the Wisconsin Male Burlesque Festival. The 33 acts showcased performers for whom burlesque is a means of clever and whimsical expression. For Waxie Moon, a former actor, that expression is cathartic: “With the [persona of Waxie] I can be unapologetically gay. As an actor I felt like I was only gay if I was playing a gay role. So that is extremely liberating, to be this unapologetically queer character that celebrates gay pride everyday.”

Such celebration of the variety of masculinity was a key part of the festival’s success. According to Waxie, burlesque requires “a kind of healthy audacity and audiences respond to anyone and everyone who does it. It’s defiantly a celebration of possibility and redefining what we’ve been told is sexy. When you combine sex and humor, my god, it’s so yummy. And when you go to a burlesque show it’s a guaranteed good time: who doesn’t love theatrical striptease?”