Marriage Equality in Our Time 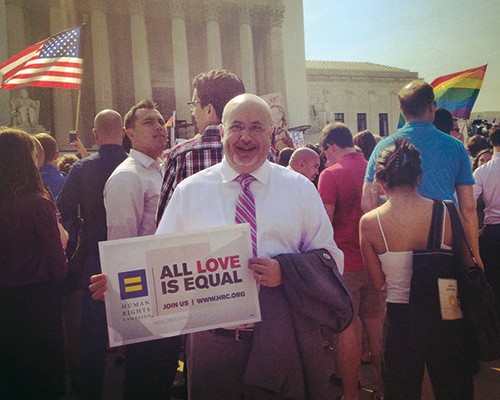 Many of us in Wisconsin remember November 7, 2006, as a dark and sad day for our state—the day the constitutional amendment defining marriage instilled hate in our constitution. I still recall looking over the faces of many of my friends—both gay and straight—who fought long and hard against the law, and I could sense some of them thought, at that moment, that the prospects of equality in their lifetimes were dim at best. But I knew that if we kept on fighting, we would eventually tear down the prejudices that were stubbornly holding on for dear life.

And we kept fighting. Within a year, we passed a law in the Wisconsin State Assembly that provided 43 legal protections to same-sex couples—the first set of such laws in a state with a constitutional amendment. A year later, the country elected Barack Obama as president of the United States, our first vocal pro-equality president, and the first president to publically support marriage equality. By the spring of 2013, 58 percent of the country—including 81 percent of people ages 18 to 29—supported same-sex marriage, and 93 million Americans lived in states that recognized same-sex marriage.

And then on June 26, 2013, after decades of fighting for a country where everyone’s love would be respected and treated fairly, our major breakthrough occurred: the Supreme Court came down on the side of equality, justice, and love by striking down the Defense of Marriage Act.

I was standing right outside the Supreme Court when the decision was handed down, and the outpouring of pure relief, joy, and happiness was overwhelming. It had been decided—no more would thousands of loving gay and lesbian couples see their marriages ignored by the federal government, leaving them without the protections opposite-sex married couples enjoy. DOMA had now taken its rightful place in our country’s history books, and the LGBTQ community was now viewed as no more and no less than we had always wanted—as equals.

But the gutting of DOMA was not the only victory that summer day. With the dismissal of the Prop 8 case, thousands of same-sex couples and families in California could once again have their love respected under the law.

Still, many questions remained about how the law would be implemented and how many same-sex couples would actually be affected. Fortunately, we have continued to see the federal government come down on the side of equality and inclusion. The Department of Defense, which less than two years prior had kicked brave service members out of the military if it discovered they were gay, announced it would provide full benefits to married same-sex couples. Further, it would allow troops in same-sex relationships to take 10 days of nonchargeable leave to travel to a jurisdiction where that marriage was legal.

And then in August, the Treasury Department announced it would recognize all legally married same-sex couples, regardless of whether they lived in a state that recognizes same-sex marriage. The ruling means that all married same-sex couples that live in Wisconsin can now receive all federal marriage-based tax benefits, including employee benefits and child tax credits. Those benefits will stay with you no matter which state you live in.

The case for equality has been settled: we now have the public, the courts, and the Constitution on our side. But in a year of milestones for the equality movement, the federal government must continue to lead and ensure equal rights and benefits for all its civil servants. That’s why this fall, Sen. Tammy Baldwin and I introduced the bipartisan, bicameral Domestic Partnership Benefits and Obligations Act. Our bill protects federal employees in same-sex domestic partnerships who don’t live in states that recognize marriage equality by granting them the same rights, protections, and obligations afforded to heterosexual married couples. Already, almost 60 percent of Fortune 500 companies and 19 State governments offer same-sex domestic partner benefits. The bill would empower federal agencies to compete with the private sector and state governments for the best and brightest employees.

But we know we have more work to do. Until all 50 states in our union, including Wisconsin, recognize all love equally, there will be too many people made to feel unworthy merely for who they are and whom they love. We have 36 states to go, and while the odds may seem long, they are no longer than that day seven years ago when our constitution took a turn for the worse. We didn’t stop fighting then, and we will not stop fighting now. From the halls of Congress to the streets of Madison, I am as confident as ever that our quest for equal rights will prevail. n