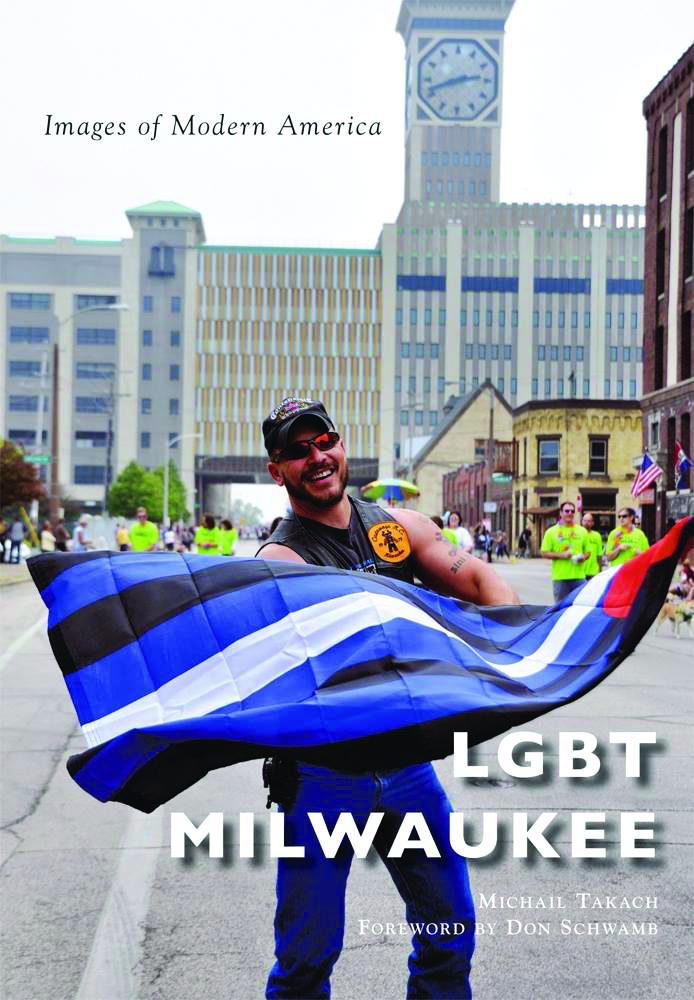 Growing up in a time of great downtown reinvention, Michail Takach became fascinated with Milwaukee’s urban culture, landmarks, and neighborhoods at a young age. He’s been chasing ghosts ever since.

As an author, archivist, and communications professional, Michail works with community organizations, including Milwaukee Pride, OnMilwaukee.com, and Historic Milwaukee to broaden the scope of historical appreciation beyond the “same old, same old” textbook stories.

Why did you decide to tackle this particular project? Why do you feel it’s important to catalogue LGBTQ history, especially in the Milwaukee area?

Hidden history fascinates me, and LGBTQ history especially so. I moved to Milwaukee’s historic Fifth Ward neighborhood just as the nightlife strip at 2nd and Pittsburgh started to disappear. For 10 years, I watched as longtime landmarks—and the elders who enjoyed them—started to disappear from the landscape. Gentrification and renewal often come with the cost of lost heritage. I realized the time was now to capture this history before we no longer knew it. In partnership with the Wisconsin LGBT History Project, I dove deeper into our untraced cultural ancestry than ever before, and I still haven’t stopped. In fact, we had to remove an entire chapter from the book, because there was more content than anyone expected.

What ideas did you already have about the history of the area, and what changed/what did you learn during the process?

Growing up in the ‘80s and ‘90s, I always understood LGBTQ nightlife to be concentrated in Walker’s Point, with a handful of outliers here and there. I’m increasingly fascinated by how far and wide “gay bars” were actually scattered throughout Milwaukee, and how only in recent decades did they become concentrated in a “gayborhood.” It’s amazing to see how many longtime landmarks were operating in plain sight, integrated into city blocks at places like 19th and North, 27th and Michigan, 12th and Vine, 18th and Vliet—places that few Milwaukeeans would consider nightlife destinations today, and may have never actually visited in their lifetimes. In fact, Milwaukee’s scene was so developed by the 1960s that over 30 known “gay bars” had already opened by the 1969 Stonewall Riots. I don’t know that I would have ever expected that.

Any particularly stand-out facts or events that you can share?

What stood out most to me, throughout my research, was the incredible spirit, courage, and resilience of LGBTQ elders. In today’s world of hookup apps, genderfluid celebrities, and same-sex marriage, we can barely even understand what it was like to live proud in a time when gays and lesbians were told every single day that they had nothing to be proud of.

The media wasn’t just openly hostile and hateful, it was also demonizing and dehumanizing. Local newspapers didn’t start using the word “homosexual” until the 1960s. Prior to that, gays and lesbians were referred to as “sexual deviates,” along with rapists, child molesters, and sex workers.

In the mid-1960s, a local judge actually declared war on Milwaukee’s “deviate” community and vowed to take back Juneau Park for “normal” people. One of the casualties of this war was Elroy Schulz, a local brewery worker who was arrested for propositioning a police officer. Although the officer claimed to have only hit Elroy once in the process of apprehension, he died the next morning after being released from police custody. The officer, who just happened to be a boxing champion, was cleared of all charges and applauded for making Milwaukee safer for “normal” people. There were no protests, vigils, parades or memorials for Elroy. He died without even having a chance to tell his side of the story. Fifty years later, we cannot forget that this is where we came from, and could find ourselves again if we don’t learn from history. The book is a tribute to Elroy, and all of the nameless men and women of Milwaukee who endured injustice, violence, and murder just trying to be who they really were.

Elroy’s death, and similar acts of violence, sparked a social awakening in Milwaukee that led to gay liberation and LGBTQ pride. “If we were already going to hell,” said one contributor, “then we were going to hell in high heels. Let nothing stand between us and our fun!” Without that spirit, courage, and resilience, we wouldn’t be here today.

When and where can people find the book?

LGBT Milwaukee was released on August 22, and is available at the Arcadia Publishing website as well as Amazon, BarnesandNoble.com and other retailers. All purchases benefit Milwaukee Pride, Inc., as the author is donating commissions to the 501c3 to establish local LGBTQ history programs.

Start your purchases at Milwaukee Pride’s Amazon Smile page and an additional .5% will be donated directly to the organization: http://bit.ly/mkepride16.