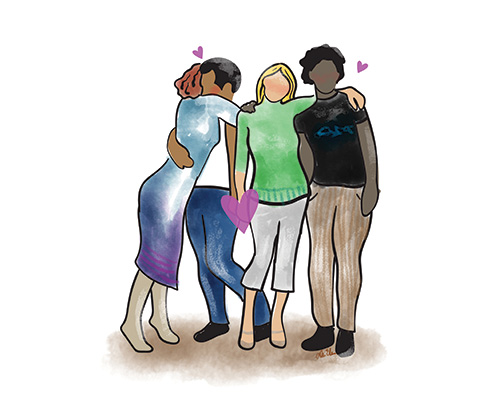 After only a few months of dating 22-year-old, red-headed college student Dave, longtime couple Alan Strozak and Dean Nett, both 56, met his parents.

In our monogamous and ageist culture, most parents expect their children to bring home a single partner similar in age, not two partners close to their own age. Most parents would have been alarmed. But Dave’s parents aren’t most parents. They were overjoyed. A few months later, at a Christmas party at Dave’s parents’ house, Dave’s mom even suggested that Dave become ordained as a priest and marry his two boyfriends, an idea Dave rejected as too weird.

While Dave’s parents were accepting of his two boyfriends, not all people feel the same way about polyamorous relationships. Polyamory means “multiple loves,” and poly relationships usually involve having multiple sexual and/or emotional partners. The key distinguishing feature of poly relationships is that all partners have knowledge of each other and all have consented, which is why it is also referred to as ethical non-monogamy.

But everybody defines the practice of poly differently. For many people, polyamory is defined primarily by the “love” aspect. It is not about having a new sex partner every week, but multiple, fairly long-term relationships. Many definitions of polyamory distinguish polyamory from “swinging,” or the practice of couples having casual sex with other couples or single people with their partners’ knowledge, while for others, any form of consensual non-monogamy is considered to be poly. Polyamorous relationships have probably existed since the dawn of time, but according to the book Ethical Slut, the term polyamory was coined in the early 1990s.

Poly relationships remain stigmatized in many parts of American society. But the Madison community is a little more accepting than most of the country. Perhaps this is because of its long history: Madison’s poly scene is nearly two decades old. Its first poly group, WIPoly, emerged in 1997 to serve as a gathering space for Madison’s poly community, both LGBTQ and straight alike. It had both a public discussion branch, WIPolyOut, and a closed private branch. From the beginning, WIPoly took great pains to distinguish themselves from swinging or orgy clubs. “We are not a swing club,” said their website. “We don’t have sex at our meetings; we hug and eat and joke and have a good time.”

In 2003, the poly community expanded as members involved in WIPolyOut (now called PolyOut) created the Madison Area Polyamory Society (MAPS), a social and outreach group that met for coffee. Interestingly enough, turmoil occurred at MAPS over an unlikely subject: board games. Many MAPS members arrived at meetings with tabletop games in tow and became immersed during meetings in role-playing games at the expense of discussions about non-monogamy. As a result, the gamers split from MAPS and decamped to PolyOut in the mid-2000s. Since then PolyOut’s members have leaned strongly toward the gamer side.

“We’ve found that there’s a lot of overlap between polyamory and non-heterosexuality and also geeks,” PolyOut’s facilitator Lisa said.

For several years MAPS and PolyOut coexisted without conflict, but in 2010, MAPS was roiled by another controversy, this time a dispute over consensual touching and cliquishness during meetings, known as “Cuddle Gate.” Members of MAPS disagreed as to whether non-sexual touching, like hugs and hair brushing, should be occurring at meetings. Those who preferred a side of cuddling with their poly gatherings jumped ship to form the Madison Polyamory Collective (MPC) in 2011.

Three years later, as MPC was struggling with membership, marriage and family therapist Jay Blevins, fellow therapist Jasmine St. John, and Ray Yunker formed a Madison branch of Poly Cocktails, a New York City–based organization. Unlike the other poly groups, though, this one didn’t emerge from conflict.

“We went and met with a bunch of people from MPC, and we said, ‘We’re thinking of [starting a poly group]. We don’t want to step on any toes.’ And they said, ‘You know, we’re feeling like we’ve lost a little focus; that the group’s lost some energy, and it might be the right time for us to have you guys do this,” Blevins said.

Although Madison’s poly community has had periods of conflict, co-founder of MPC Jim Carnicelli thinks it is more unified today.

“Groups like MAPS, MPC, and Poly Cocktails have done wonders to educate and connect poly-minded people not only in Madison, but also in many of its surrounding communities. We’re not a bunch of groups competing with one another, but simply groups that cater to different tastes within the broader community.”

Madison’s poly community may be more united, but it is not monolithic. Each poly group characterizes itself a little differently.

Poly Cocktails is a social group that meets in a central Madison bar to discuss non-monogamous relationships in a casual setting, while PolyOut “is not for socialization so much as it is for introductions to polyamory and for helping people who have relationship issues,” said its facilitator, Lisa. PolyOut’s monthly meeting is held in the OutReach LGBT Community Center. Lisa said that PolyOut functions like a therapy group because “most monogamous people have plenty of places to go for relationship issues, but not so much for polyamorous people.”

Both groups are notable for bridging the gap between the hetero and LGBTQ communities.

“We have asexual, demisexual, pansexual, people in transition, lesbian, gay, bi. If you’ve done the internal work to live outside the norm, you’re kind of primed to be accepting of others,” St. John said of Poly Cocktails.

Like Poly Cocktails, PolyOut has members of all sexual orientations.

“There’s a joke that you can’t be female and polyamorous unless you’re bisexual,” Lisa said. “Between bisexual and homosexuals and pansexuals, it’s 10 percent of American society and 60 percent of polyamory society.”

Acceptance of poly relationships may also be greater among the LGBTQ population. Strozak said that gay men are more tolerant because “it’s not uncommon for gay men of my generation to be in relationships that are open three ways.”

But many in the heterosexual community are not as comfortable being open with their poly relationships because their community is sometimes less accepting of alternative relationship practices. For some straight people, the appeal of Poly Cocktails is that its location is a secret and the meetings are closed to non-members, so those who attend are not in danger of being outed to the community.

“Most [polyamorous] people have some degree of being in closet,” said St. John. “They fear they will be judged, shamed, lose their job, lose their family. Unfortunately we live in a society [where] most people still associate polyamory with one extremist person, typically a man having lots of wives…underage wives.”

Poly Cocktails members John, 50, and Lori, 49, were particularly drawn to Poly Cocktails for its private location and confidentiality. Since coming to polyamory a few years ago after over two decades of marriage, the couple has experienced some pushback. After researching polyamory, they decided to be proactive and tell their close family members about their new relationship structure before they embarked on it.

“The reason for us to tell anyone besides our daughters [was] that if they saw us out with someone else, and it was clearly a romantic relationship, I didn’t want them to go through the pain,” Lori said. “What I was afraid of was not that my mother would say, ‘I saw John cheating.’ I was afraid that my mother was going to see him, think he was cheating, and not tell me and have to sit on it. I didn’t want to put anyone through that.”

However, their disclosure didn’t receive a universally welcoming response.

“Some [family members] are way not cool with us,” Lori says. “We had people worrying that we were going to get divorced.”

The most positive reactions they got were, surprisingly, from their kids. When they told their grown daughter they were embarking on a poly relationship, she said, “That’s great. I’m dating a couple. And I said, that’s so nice honey, let me tell you more about us,” Lori said. “I think she’d be a little nervous about telling us [she was dating a couple] and that turned into the easiest thing she’d ever told us.”

A Community of Support

Regardless of sexual orientation, for the polyamorous and those thinking of exploring this lifestyle, Madison is a good place to be. Madison is the home of “The Ethical Slut,” a fictionalized YouTube series based on the canonical polyamory guide of the same name. It is also the birthplace of one of the nation’s most popular poly podcasts, “Polyamory Weekly,” which was started in Madison in 2005 by Cunning Minx.

And it’s not just the plethora of poly groups that make it an accepting city. Madison’s kink and LGBTQ communities are also supportive.

Strozak agrees that the Madison community has been accepting of his poly relationships.

“Certainly you’re not going to find any judgment at any of the gay bars you go to,” Strozak says. But even some non-LGBTQ bars are accepting. “You can very easily go to the [recently closed] Inferno, especially on fetish night, or the Cardinal Bar.”

As its history shows, the Madison poly community may not always agree, but disagreements and multiple perspectives keep it healthy.

“In the spirit of polyamory, I often say, ‘variety is good.’ I prefer to think that the poly groups that have come and gone and still exist in Madison are all about variety,” Carnicelli said.

And, in fact, Madison just added another poly group to its ranks: national polyamory group Loving More formed a local chapter this May.