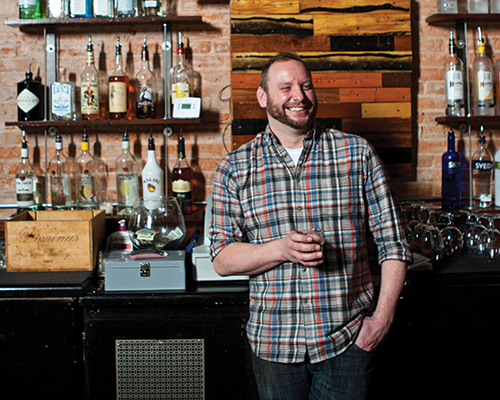 Years before I worked at the Shamrock Bar, I always thought it was a warm, inviting place, a place where people of all walks of life came together and left their troubles at the door. At that time I was the manager of Cafe Montmartre, a downtown wine bar and jazz cafe. Having been there for eight years, I decided it was time for a change.

Glen, the Shamrock’s previous owner, offered me a position as a bartender. I reluctantly agreed, thinking it might be a good fit for me. As much as I enjoyed being a patron, I was skeptical about working in a gay bar. It turned out to be a life-changing decision. I really enjoyed the position, the patrons, and the opportunity the venue offered me to be part of a community.

I quickly became the manager and remained so for many years. Glenn and I made many improvements over that time, but it was never really the business I thought it could be. I always thought it needed a little TLC and attention to detail. I saw potential to create an environment that matched the camaraderie and sense of community I had experienced there.

When the Shamrock closed in July, I did a lot of soul-searching. I had lost my job, and felt as though I had let my staff down. Beyond that, I lost my favorite place to hang out and the sense of community that came with it. It had always been so much more than a job to me. I loved all the patrons and staff.

So, I decided to open a new venue in its stead: the Shamrock Bar & Grille. I had a vision and felt I had a responsibility not just to the gay community, but to downtown Madison as well. It was time for me to put my own stamp on the place. I knew I had many hurdles ahead of me. Looking back, I’m surprised I went for it. Even as a write this, tears well up a bit in my eyes.

I began by applying for a new liquor license and formulating a business plan. My goals were to maintain the welcoming atmosphere while providing a higher quality product with improved service. Then, I had to find a way to finance it. I’ve never been the kind of person to ask for help, but I really had no other choice. I found some investors through personal and family relationships. What was even more amazing was the way the community reached out to me! People actually approached me to help. Not only financially, but also with advice. So many friends, colleagues, and patrons offered their help in any way they could, from cleaning to demolition, but also a lot of emotional support. I was “walked off the ledge” many times. I never felt so much support in my life. It was then that I knew this was truly much more than starting a new business. People wanted a place to gather and to feel at home.

Once I had found investors, the challenge of creating the space I dreamed of began. I pulled many ideas from my years in the bar and restaurant business. I used many ideas from Cafe Montmartre. It was paramount that the space maintain its warm and inviting feel, but it needed a facelift and a lot of love.

It would be unfair not to mention my longtime friend Kevin Day. Having recently left his job, Kevin worked on the bar for three months without pay. He would often work 15-hour days and do tasks neither of us thought we could accomplish. He is now my bar manager.

I was very pleased to discover beautiful cream city brick beneath the drywall and plaster in the bar. This amazing gift became part of my design theme. I adore the look and feel of exposed brick. I decided to incorporate the brick with reclaimed wood and exposed metal for an overall organic look. Again, Kevin proved to be exceptionally dedicated and surprisingly handy with this work.

During the renovation, there was an amazing discovery. On a chunk of plaster underneath the drywall, written in black marker, was “FELICIA WAS HERE 4/20/91 MS GAY MADISON ‘90-‘91.” Felicia Melton-Smyth was a longtime friend and employee of the bar. She was tragically taken from us while on vacation in 2008. She was a philanthropist, and the annual AIDS Network gift drive is named in her honor. I saved the plaster and framed it. She will always be here in spirit.

We made more trips to Home Depot than I can recall. The manual labor proved to be an amazing stress relief as I worked toward my liquor license. I look back at the redesign as one of the best summers of my life. It was a lot of work, but also a lot of fun.

Again, the community stepped forward to help. Some Saturdays, as many as 20 people would volunteer and lend their expertise to the project. Staff from Five Nightclub came to help. It tickled me that another gay venue came to support me.

This was a particularly trying time for me. I was unemployed. I was borrowing money. I was living off credit cards. And I still had not been granted my liquor license. While the renovation was challenging, the license was the most stressful part of the experience. Eventually, though, it all worked out and the license was given. It was very hard on me personally to be so much in the public eye. Many rumors were flying about and I often felt I was being personally attacked. It was then that I would try to remind myself how the community had reached out to help in so many ways. I was humbled by the faith my colleagues, friends, family, and patrons had in me. I was not going to give up.

After the license was granted, that’s when the fun truly started. The bar was beginning to take shape and my vision was being realized. We muscled forward and finally set an opening day. It was so unbelievable! I loved seeing the expressions on patrons’ faces as they walked into the bar. The reception to the new space was amazing. Customers who had been coming in for 20-plus years complimented the changes. This was very important to me. I saw myself as more of a caretaker of an important venue than the proprietor.

As far as operations go, I wanted to give a strong focus to customer service, quality ingredients, employee appreciation, and sound business practices. Lunch is now served Monday through Friday, with the grill open until 1 a.m. with a dedicated cook position, rather than bar staff preparing the food. The menu has been well received and the food side of the business is thriving. I began serving brunch in November, which was very popular with the previous business.

I believe strongly in philanthropy and supporting Madison’s vibrant LBGTQ community. I see the bar as a great opportunity to give back. I love supporting many organizations. Beginning in January, I’ll be featuring local artists in a rotating art show. I’m excited to be able to branch out into other ways to give back.

Reflecting on my experience, I have to say it was not the summer I had planned. I learned a lot about myself, the gay and downtown communities, and people in general. If you believe in something and don’t give up, amazing things are possible, even if the odds are stacked against you. I learned that the bar is so much bigger than me and means so much to so many people. It mostly taught me that Madison’s LBGTQ community felt a void and stepped forward to help me bring it back. Providing a space for people to gather and be comfortable is the ultimate reward. For that, I’m incredibly grateful.