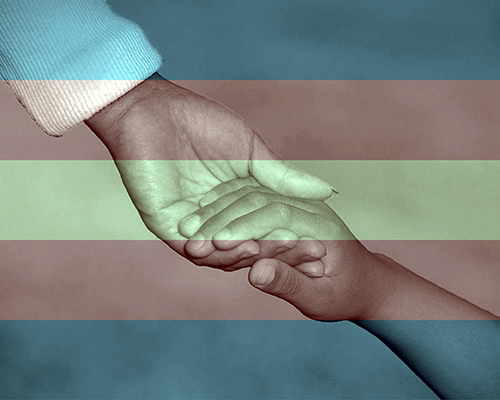 Parenting isn’t easy. The old joke about not getting a manual with each kid still holds true, even in our hyper-technological 21st century world. Every child is unique. Everyone comes with their own specific needs.

As a parent, though, what do you do when your kid’s needs have traditionally been almost entirely ignored by society? Worse yet, when they’ve been actively discriminated against, misunderstood, even threatened?

Slowly but surely, parents, teachers, and the kids themselves are breaking ground and blazing trails to make sure no one gets overlooked, and that every child gets the support and attention they need. One such group is TransParent, a coalition of Madison-area parents of transgendered and gender-expansive children that’s working to provide a network for education and resources to those who might otherwise have nowhere to turn for support.

Begun in 2009 with just three people, TransParent has since grown exponentially, to the point where parents from outside the district are now basing decisions to move to Madison on the availability of that support.

Liz Lusk is the GLBTQ resource specialist for the Madison Metropolitan School District, one of only six people in such a position in the entire country. She says she frequently gets calls from parents outside of the district looking for help, too.

“Oftentimes parents come into contact with groups like TransParent through the schools,” Lusk explains. “We’re seeing more parents of younger kids, a much greater diversity of who’s involved. When I first started in this job I thought we’d mostly being dealing with high school and middle school kids, but that hasn’t been the case at all. Kids are coming out, or just feeling freer to be themselves, at much younger ages now.”

Azuela is one of the TransParent group’s original members. The grandmother of a young transwoman, she speaks with great love and respect for the support she’s found in the group, as well as with clear pride in her granddaughter.

“When she was very young, she asked me, ‘When are they going to have brain transplants?’” Azuela relates. “When I asked why, she said, ‘I want to have my brain put into the body of a girl.’ It broke my heart.”

Counseling was no help. Azuela says the therapist insisted that her granddaughter was simply gay, an assertion that didn’t make sense to the girl. “She told me she didn’t want to see the counselor anymore because of it,” Azuela adds.

In fourth grade, her granddaughter became so depressed about not being able to go to school as a girl that she no longer wished to attend at all. Azuela looked for help but found few resources for their particular situation.

“She’s very special, very proud, and she wasn’t going to change,” Azuela says. And it was through the eventual help of the TransParent group that she came to understand that she could help her granddaughter simply by showing that she wasn’t afraid of who she was, and that she supported her.

“People perceive that information. It makes a difference,” she says.

Bea (not her real name) found the TransParent group through Liz, once her son came out to her as trans. It was, she explains, a lifesaver. “Just being able to talk to other parents about it, hearing everyone’s stories, especially from parents of older children about how well they were doing, how common it was. They helped me realize that my son’s life wasn’t going to be as dangerous as I feared.”

The group has also helped many parents realize that, in the end, their kids are still just that: kids. Everyone is different, with different needs and dreams.

“[My son] is an introvert and just wants to be seen as a regular guy, not an activist,” explains Bea. She laughs when relating an exchange they had about the various trans-focused events they’ve attended. “He said, ‘I can’t be friends with people just because they’re trans!’ He just wants to be allowed to make friends like anyone else.”

Another positive side effect of their TransParent meetings, they say, is that the older kids tend to watch out for the younger ones, often unintentionally becoming mentors and role models for them.

“The kids have already gotten there. They’re way ahead of us,” says Michelle with a chuckle. Her child, who identifies as gender expansive, transitioned in preschool. They’ve been successful in getting classmates and teachers to move fluidly between different gender pronouns. Still, Michelle finds crucial support in the TransParent group.

Navigating the medical system, finding doctors who understand the unique needs of transgendered people, and even dealing with getting passports and other IDs all become more complicated procedures for parents of trans* children. The group helps by providing much-needed resources and references—some of which comes from the other children themselves.

“My 10-year-old put together a FAQ about hormones, blockers, all of that, that’s used by many parents in the group and their kids,” Michelle says proudly. “It’s cool that here kids can get info from real live people, not just the Internet.”

In defiance of the old joke, the group is working to compile a central handbook of sorts, to include crucial information and resources about raising a trans* or gender non-conforming kid.

“There’s always more work to do; it never ends,” says Michelle. “We’re just parents like anyone. We want to help our kids thrive.”

For more information about the GLBTQ outreach program and the TransParent group, contact Liz Lusk at (608) 663-8449 or [email protected]