Steven’s energy is palpable. Young, confident, and proud of his success, he is the perfect example of urban Madison. Making sure he is aware of current fashion trends is something that concerns him, so again, I immediately thought of Jazzman retailers on State Street.

This eclectic little downtown men’s boutique with a European flair is where all men concerned with staying current should turn. Co-owners Paul and Craig, as well as their retail staff, are knowledgeable and friendly, which makes shopping at Jazzman an experience you will want to repeat…trust me.

In working with Steven, I was very excited to piece together an ensemble that was modern as well as semi-conservative. I chose a look that could very easily transition from office to after hours. Although some corporations don’t allow denim, many do, and as long as the denim is not torn or overly faded, it can easily become upscale (sometimes more so than trousers). We went with a pair of LTB Istanbul jeans, a Ben Sherman black and white polka dot dress shirt with J. Campbell graphic tee, and a Calvin Klein black linen blazer.

Steven was initially not sure about the graphic tee on top of the dress shirt; but once on, he loved the stark black contrast against the pronounced black and white polka dots (and against his hair and skin they looked blindingly good). Adding the black blazer takes this otherwise after hour ensemble and turns it into a day-time look for the office. In addition, the graphic tee can be left off during the day for a more conservative look, and simply thrown on before heading out into the night (with or without the blazer). Compliment the outfit with a pair of Steve Madden, union black leather loafers also at Jazzman, retailing for $79).

I often hear that there simply aren’t enough retail stores in Madison catering to men, and that may be true, but thankfully there are a few that keep inventory changing and stock clothing that it is not run-of-the-mill. Remember, the quantity of retailers is hardly the issue when shopping for clothing; it’s the quality of retailers available that matters. 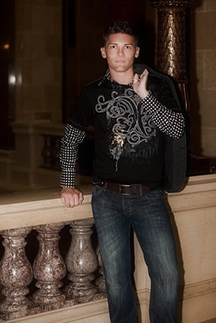