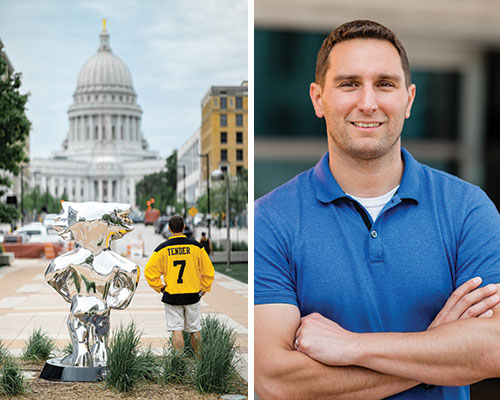 Every year, the MGHA does these essays, and I’ve had the opportunity to read quite a few of them over my three years with the organization. This year, after being tagged by someone in the league, I’ve chosen to write one myself. This probably isn’t the typical “What Gay Hockey Means to Me” essay that you’re used to seeing. This is more of a look back at my experience in the league, both how it has shaped me and how (I hope) I’ve been a positive influence on those around me.

Let’s start a bit with my background: I grew up in southwest Pennsylvania in a rural town where people love their guns, and everything that isn’t good is, well, “gay.” Don’t get me wrong, there are some great people, but there are also some very closed-minded folks who have never ventured outside of their little bubble. I moved to Madison in 2011 and, when I moved here, I had my own little bubble around me, too. I didn’t know much about gay culture, and I surely didn’t know any trans folks or even know gender queer was a thing. Like people who comment on a bad Facebook post, I thought the genitalia you had defined you. I was naive and uneducated about gender identity and sexual orientation.

As for me, I didn’t really know I was gay until a few years ago. It took a good friend to get me to really think about things and connect the dots. When I did, it was quite a relief. I honestly can say that it felt like a weight had lifted. I know it sounds cliché, but I remember feeling it. I had known about the MGHA and decided to sign up.

Unlike so many who write these essays, hockey wasn’t new to me. I started playing in high school. I worked at an ice arena for six years, too, during high school and college. I had played adult league and was playing with a local group here in Madison. I had experience. I wasn’t the best player, but I could certainly hold my own. I came into the league not knowing what to expect from a gay hockey league.

My first team was incredibly welcoming. I was still trying to get my bearings in this unique, inclusive league. It was a different experience for sure, but I quickly realized that success in this league wasn’t measured in goals or wins, but instead in how well you play with others, your encouragement of the team, and even interactions with the other team. I learned that the MGHA aligns well with my demeanor and style of play. I decided to stick around and even signed up to be on the board for my second and third years in the league.

One of my favorite aspects of this league is the inclusive play. I love the encouragement and the idea that everybody deserves to play. If a lesser-skilled player gets the puck, we let them hold onto it for a little while to get more comfortable. If somebody accidentally knocks somebody down, we ask them if they’re alright and sometimes even help them up. For me, this is huge.

Some advanced players may come into the league and struggle with the concept of not taking the puck end-to-end and I admit that I certainly have moments where I want to do just that. For me, though, part of the challenge and fun of this league is improving my other skills while helping hone the skills of the other players. The MGHA lets me work on my leadership abilities while letting me help and encourage those who have less experience. It lets me offer pointers. It gives me the opportunity to instill confidence in people who, due to a plethora of reasons, don’t have that confidence yet.

If you remember, I brought a bubble with me from Pennsylvania. It shielded me from people who were different. For me, gay hockey taught me that there’s a whole lot more to this world than what’s inside that little bubble. Before I joined the league, I hadn’t really known anyone who was trans or gender queer. I think I was honestly a little uncomfortable. I didn’t understand it. I didn’t know anything about it. It was just foreign to me, and foreign things can be scary.

I write this showing vulnerability and hoping that this doesn’t make me a bad person. This league, though, has introduced me to a whole new world (go ahead, sing the song from Aladdin…I’ll wait). I know that I’m a much more accepting and open person because of this league. I also know that I’m always learning. I know that if I don’t understand something, I can ask. This league has given me a space to grow and has helped me expand my worldview.

Most of the time, these essays tell the tales of people who haven’t felt welcome in organized sports or haven’t been comfortable in team settings because of who they are. It’s about the love and acceptance they find in the MGHA. I love that this league fosters those moments. It fills my heart to have so many people share success stories of feeling welcomed and loved when they play with our group.

My story is a bit different, but the outcome is similar. Gay hockey has given me a place to help the people I just mentioned. It’s given me a way to give back and foster confidence and inclusion. At the same time, it’s given me a place to learn how to be more inclusive. I’m sure I still have a bubble. I think we all do. What I do know, however, is that my little bubble is now much bigger thanks to the MGHA and the people in the league.

Ed. Note – We are happy to publish the Madison Gay Hockey Association’s winning essay each year for their league-run essay contest. Any other LGBTQ sports organization (or similar) that wishes to publish essays or testimonials from their league members should contact Our Lives at [email protected] – our door is always open!