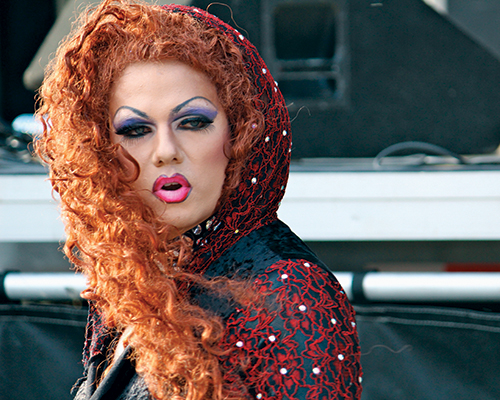 There are many different types of performers in the LGBTQ community, from comedy queens like myself to over-the-top showgirls to dramatic stage performers. The diversity is what makes our community so very special. Lucy Von Cucci does all of the above.

Lucy, can you tell us where and when your career as Ms. Von Cucci began?

Lucy was born in the summer of 2009. I had entered an amateur drag competition with my best friend and high school sweetheart, Jake. Both of us had a strong interest in strong female characters, as well as pop divas. Our affinity for them led us to drag as a performance art. I was painted and dressed like a Barbie doll by Keelie Cox Dominoe and shoved out onto the stage. Jake and I made the finals, where we both lost, but the connections and exposure allowed me to pursue drag in the future.

So you found yourself wanting more. What was the next step for Lucy?

Well, after only strapping on the heels periodically for the next year, I decided to run for Miss Planet Q at Club 5 in the spring of 2010—and failed miserably. After seeing my spark onstage, however, I was asked to join the Club 5 Dolls and later convinced to run for my first-ever US of A pageant: Miss Isthmus in July of 2010. Although my drag career had taken off, my life offstage had come to a screeching halt. I was informed that Jake had been a part of a deadly car accident and was killed in Florida.

I am very sorry to hear that. How did you cope with this loss?

Looking for a way to deal (or maybe not deal), I decided to run for Miss Isthmus. I had prepared a comedic musical-theater number and swept the talent competition, leading me to the crown. I also did well in the interview. My gown presentation needed work (and still does), but I had a natural stage presence as well as theatrical experience. Winning led to more exposure and recognition. I placed in the top ten at Miss Wisconsin US of A that year.

So immersing yourself into the art of drag helped you through the hard times?

Yes—however, the 2010 Dolls disbanded at the end of the year, and I started to grow tired of Lucy. My title and reputation kept getting me bookings, but I really had a desire to return to the theater. In the spring of 2011, I got a part in Queer Shorts 6, and was bitten by the acting bug again. I did, however, have a few more drag events to attend to. So, I decided to pitch an event to a local venue called Lucy’s Amateur Drag Race. This was my way of giving back and finding fresh, talented performers to grace the stage. It was a month-long event in July every Friday, with the final Friday being finals. By the end of July, I was about ready to hang up the heels and focus on a career as well as my hobby of theater.

What led you back to drag?

I came to realize drag and theater for me will never be separate. I was pre-cast in Michael Bruno’s cabaret-style Dirty Little Showtunes late in the summer of 2011, which featured a half drag-queen cast in Act 2 featuring yours truly (as well as featuring Madison’s other theater queen, Davina DeVille). Next I was cast in StageQ’s Clapptrapp, featuring a female impersonator as Maria in a gay-campy version of The Sound of Music. It wasn’t until Steve Noll’s production of As Bees in Honey Drown in the spring of 2012 that I got to be a boy again on stage.

So you changed direction to focus on “Lucy” again?

I auditioned for the Dolls of Five again in 2012 and entered into what I call The Second Coming of Cucci. I no longer wanted to be taken lightly as not only a performer but also an artist. I made the Dolls cast but didn’t stop there. I prepared another theatrical talent for the Miss Madison pageant and took another title. Longing to be more than a Broadway diva to the drag community, I stayed away from theater while preparing for the state title of Miss Club Wisconsin; I stuck to pop music, humor, and hunky backup dancers (later named the Cucci crew). I won the talent category and swept the onstage interview. I was able to win my first state title as Miss Club Wisconsin.

Congratulations! A lot of performers strive to accomplish the same goals, but some have no idea the responsibility that comes with such a title. What you have learned since your win?

I’ve tried to promote the art through various avenues. The second Amateur Drag Race has almost reached its conclusion, and we have six new girls I want to throw in the mix of performers in this city. I have taken over Five Nightclub’s Sunday shows to help promote consistent and entertaining shows, with an audience-first approach.

What sets you apart from other performers?

I bring a fresh take to drag. I don’t let my ego or pride stand in the way of my art. I let my performances and actions speak for themselves. Remember, you are there to entertain. Pick numbers that cater to the crowd you are in front of, and be prepared! There is nothing worse than going out to shake the stress away on a Friday night to see a drag queen doing a ballad without knowing any of her words. You are paid to keep the crowd engaged, so make sure you do it!

Where does Dan stand in the life of “Lucy”?

In my day life I work for Meriter in their health information management department. I enjoy working for a nonprofit healthcare group and hope to advance within the company. I’ve also started seriously dating a “restaurateur.” Things in my life have drastically changed since I started doing drag, but I can finally say I’m starting feel comfortable in my own skin both on- and offstage.

Where do you see yourself and your career heading?

After my step down from Miss Club Wisconsin, I will most likely back off from performing for a while. I would still like to stay involved in the production of shows. Next to being in good drag shows, I love to see good drag shows. If there is anything I can do, with or without Lucy, to provide those shows, I will be all for it. My goal for the future is to be able use my art to express myself onstage and continue to raise the bar and push the envelope for the good of both the drag community and the Madison LGBTQ community.

What advice would you leave us with for anyone who is embarking on the journey into drag or stage performance?

I would let people know to always keep a good head on their shoulders. Don’t be influenced by the negativity that can surround the drag community. People will always gossip, throw shade, and judge, but as long as you can focus on yourself, always give your best, and not get wrapped up in the illusion, you can continue to give great performances while winning over the audience and your peers.

Trina Avalon-Pirahna (Christopher Wilford) is a local drag entertainer who has performed in various nightclubs and charity events around Wisconsin. She is the current Miss FIVE Nightclub Plus and introduces Our Lives readers to other entertainers of interest to our local LGBTQ community.