Preserving the Queer Past 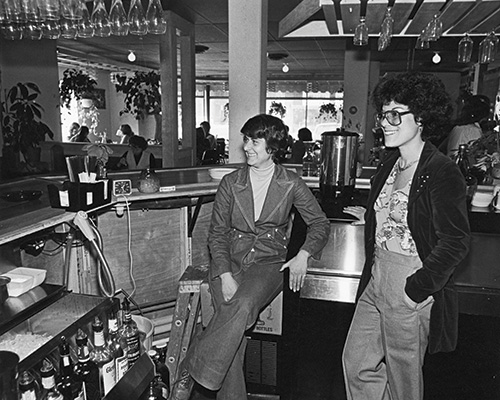 Growing up in Dane, Wisconsin—a small community of 250 people northwest of Madison—a then young girl of 11 was “struggling with my sexuality.” The oldest of 11 children, she recalled, “I knew I liked girls the way boys liked girls, and I didn’t understand why.” Drawing on rural imagery, she would say, “I didn’t know what a lesbian was from a pumpkin.”

On New Year’s Day of 1963, just before her 18th birthday, the young woman moved to Madison. Her grandfather, who she described as “my mentor and my trusted adviser,” had told her she “didn’t need to worry, that if I got to a larger city, there was other people who were like me, and that I wasn’t the only one.” Her grandfather was in a band and knew musicians who were gay.

Thus opens the remarkable oral history of DJ Wipperfurth, one of those rare breeds of Madison area native. Her story is part of 80 LGBT oral histories amassed by the UW Madison Archives as part of their overall oral history program documenting both the campus and the environment of its city. The Wipperfurth story is rich with early vignettes of the area’s LGBT past.

To find community she went to the gay bars, except they weren’t really gay. She recalls the Three Bells on University Avenue across the street from where the George Mosse Humanities Building now stands. There gay men, especially the “fly boy” servicemen from Truax, were off to one side and the women congregated in the back around the pool tables and pinball machines. Straight college students were the predominant crowd. The older lesbians would be “chasing us like crazy” but they also would “take us under their wing, kind of let us know what was going on, where to go and stuff.”

Wipperfurth remembered leaving the Three Bells with another woman and holding hands when three punks started heckling them. She knew they were going to hurt them so she told her friend to run back to the Three Bells for help while she started “just flailing everywhere” against her attackers. Wipperfurth knew how to stand up for herself. She recalled, “They had all they could do just to keep track of me.” When her friend told the doorman at the bar, he snapped his fingers and the straight boys “came out of the bar and kicked the living daylights out of [her attackers].”

She also recalled the Stop Lite, a bar at the corner of Wilson and Butler Streets owned by Jack McManus which was popular with lawyers at lunch and right after work but was otherwise dead in the evenings. Then the female bartender would invite “us gals down to the bar” for the evenings. When McManus was kidded by the lawyers about “all them girls hanging around down there, but they ain’t our kind of girls,” Jack’s reply was, “Oh, the girls got to have someplace to go.” But he did complain that the bar was now making so much money it wasn’t a tax write-off anymore.

Wipperfurth remembers early politics and the Clarenbach family, too. Kay Clarenbach had been appointed in 1964 by Governor John Reynolds to chair the Governor’s Commission on the Status of Women and she later became the first chairperson of the National Organization for Women (NOW). Kay helped shape a lot of local progressive discussions about women. Her son David became an early gay rights advocate. Wipperfurth also recalls the first Take Back the Night marches, and how the “Her Infinite Variety” women’s radio show on WORT was also an early influence. She recalls going to A Room of One’s Own bookstore to sit in the lesbian section and read.

Fond memories included “huge lesbian Thanksgiving dinners at my house. About 75, 80 women would show up.” One time a person came in and said two men were sitting down the street in a car watching the house. Because she drove a cab she recognized it as an unmarked squad car. Wipperfurth went up to car and told the men to roll down the window. “And they said ‘what?’ I said shut off the car. ‘Who are you?’ I said, you know who I am. That’s my house you’re watching. Shut the car off. I pay taxes and I don’t want you wasting my gas money. I went back to the house and they left.” She presumed they may have been writing down license plate numbers as that was known to happen in town in the old days. It’s a great example of how DJ could be fearless.

She recalls the “wonderfully lovely Catherine Rouse” who was the main mover behind Lysistrata. A tremendous experiment in a woman-owned and woman-operated space, it was a bar and restaurant. Kay Clarenbach was also one of the board members. Termed “the nicest place we’ve ever had in town, as far as I’m concerned,” its eventual destruction due to fire, possibly by the building owner for real estate purposes, caused great sadness in the community.

Wipperfurth’s work experience included a stint as a manger for the Cardinal Bar with Ricardo Gonzalez. But her main career was 31 years driving a cab, 21 of them with Union Cab. While there she was also able to urge others to help the Women’s Transit Authority on campus in providing safe night-time rides for women.

For a time, she also tended bar at the Back Door, Rodney Scheel’s first foray into a locally owned gay bar. Across the street was a bar where, when the students got liquored up, they would come over to beat up the queers. She remembers them yelling obscenities and throwing ashtrays. A small, 100-pound woman would grab a pool cue and watch her back in these confrontations. One time she remembered a tall, slender drag queen being slammed into one of the students and saying, “There’s nothing worse than an angry queen. Have you ever been hit with a high heel?” She recalled her own reaction, “Not afraid like scared, but afraid like one of these days, one of these jackasses is going to hurt me, stupidly.”

Wipperfurth participated in many of the community’s institutions. When asked about being on a softball team she said she was the pitcher. “Fast pitch, yeah, I don’t play slow pitch,” but this was in her Dane days. In Madison, she recalled one softball game where the “shirts off” movement struck, “so all the fans in the stands and the ballplayers took off their shirts.” Another time she was umpire between a Madison lesbian team and a team of women from Taycheedah—the women’s prison.

Wipperfurth is recorded saying, “Yeah. I’m very proud to be a lesbian… The other thing I really want young people to understand is that they do have people they can look to for guidance… Because I went through a lot of torture, mental torture that I inflicted on myself, because I couldn’t figure out what the hell was going on with me.”

DJ Wipperfurth’s story (and there’s more) is preserved because of the oral history interview by Pat Calchina, who has done a lot of work to preserve and present lesbian history. Now, an ad-hoc group interested in the Preservation of Madison Queer History has taken up the challenge to preserve even more of it. Cooperation has been secured from the UW-Madison Archives to supplement their extensive oral history material with written documents and other archival material. The New Harvest Foundation and the university’s George L. Mosse Program in History have both agreed to help fund a part-time archivist to collect and organize material. Outreach is administering part of the effort.

Because of the trailblazing and productive history of Madison’s LGBTQ community its history is both locally and nationally important. Since part of the lives of early gay and lesbian residents was subject to historical erasure due to the closet, we want to save the parts of our history that do exist.

Look for future information coming in Our Lives about materials collected and how to help this effort. So, especially when cleaning out the closets, DO NOT THROW OUR HISTORY AWAY!