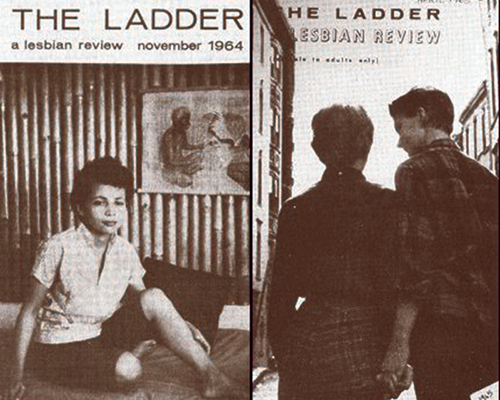 For the United States, The Ladder, published monthly from 1956 until 1972, was the first nationally distributed lesbian publication. It was sponsored by the Daughters of Bilitis (DOB), the lesbian organization founded in San Francisco.

DOB founders Phyllis Lyon and Del Martin had experience in journalism. In the 1950s, during the height of McCarthyism, they used pseudonyms for publishing. Soon, however, they switched to real names in an effort to encourage their readers not to hide. Early issues were created by mimeograph and hand stapled. Women were assured the names on the mailing list were secret and held safely. Circulation was limited to 400 brave subscribers in 1957, and it grew to a list of 3,800 in 1970. One of the subscribers who wrote in was the black playwright Lorraine Hansberry, author of A Raisin in the Sun.

Barbara Grier, under several names including her own, contributed much material, especially as a book reviewer. The Ladder wanted to make its readers aware of “lesbiana,” or material published with lesbian content. Grier was later the publisher for Naiad Press, which put out many lesbian volumes, and is someone whom I’ve had the pleasure to hear speak. She would write in 1975, when a reissue of the magazine occurred, that the editors “believed that they were moving the world with their labors, and I believe that they were right.”

Lesbian historian Lilian Faderman, in Odd Girls and Twilight Lovers: A History of Lesbian Life in Twentieth-Century America, is a bit critical of DOB for its narrow appeal to middle class lesbians. The organization had in the 1950s advocated a “mode of behavior and dress acceptable to society.”

The lesbian magazine maintained friendly relations with ONE Magazine, the primary gay male publication from Los Angeles. The Ladder was also connected with Frank Kameny of the D.C. Mattchine Society. The Ladder was delighted to report to its readers in December of 1963 that Felix Pollack, Curator of Rare Books for the U.W. Madison Memorial Library, had recognized the magazine as a valid “Little Magazine,” a category on which he was the national expert. Pollack wrote an article in the September 1960 issue of Library Journal that such a journal was unthinkable 30 or even 20 years prior.

He wrote, “We are today witnessing the emergence of publications like ONE, Mattachine Review, and The Ladder, presenting with candor and fortitude the position of male and female homosexuals in our society.” He felt they were “a variant manifestation of the time-honored little magazine concern with the outsiders of society, the outcasts, the deviators from majority-sanctioned ‘norms’ with minority rights, problems, and aspirations.” He detected a different aspect, too, for he wrote, “Even though the minorities in this case have to be their own spokesmen and defenders.”

Among the contributors to The Ladder were Jeannette Howard Foster, whose 1956 book Sex Variant Women in Literature: A Historical and Quantitative Survey was one of the earliest and comprehensive works of lesbian scholarship. Her self-published pioneer work in lesbian studies languished on obscure library shelves. The Diana Press and the Naiad Press reissued editions in 1975 and 1985.

Feature articles were on famous lesbians such as English author Radclyffe Hall and Swedish Queen Christina. Fiction and poetry populated its pages. The Ladder carried stories on the homosexual vote, the homosexual minority in America, the history of S.F. homophile groups, and it featured several articles on the homosexual picketing in the nation’s capital including a picture of the picket on the cover of the October 1965 issue.

While The Ladder did not have many news items, some were scattered among its pages. In the August/September 1970 issue they told readers that Dr. Albee, from the faculty of Case-Western Reserve, who was president of the American Psychological Association, spoke to the Wisconsin Psychiatric Association on June 17 of that year. He branded “repressive forces as patrists,” criticizing exaggerated masculine values and cutthroat competition. About these patrists he asserted, “Women are accorded in this group low status: men use them rather than accept them as equals. At the same time the importance of chastity is stressed and strict controls are imposed on the freedom of women.” Presumably he felt his Wisconsin audience would be receptive to such a critique.

The magazine, which had printed articles on homosexual marriage, was probably delighted to present to its readers this news bit that, “Two Black Women Seek Marriage License” in Milwaukee. The brief notice told the story of Donna Burkett, 25, and Manonia Evans, 21, who had been denied a license by county officials. They then filed suit in the Federal District Court. The couple were quoted that they were “being deprived of martial benefits such as inheritance rights and the filing of a joint income tax return.” They would lose their court case but were married in a church ceremony.

A beacon for the isolated

Lesbians from Wisconsin would find further connection to The Ladder. In November 1958 J.W. D. from Mauston wrote that she was pleased with her recent subscription and commended the editors “most highly.” She was moved to send along a small donation. From her small city of 3,200 in Juneau County she proclaimed herself “isolated here” and that it was refreshing “to read about those that I have things in common.” J.W.D. was “greatly interested in the books listed on page 15, Lesbiana.” She hoped she might be able to order them through the magazine’s office. In May 1960, after “many requests from friends and readers,” the magazine announced “Beginning DOB Book Service.” It was small selection of lesbian titles and The Ladder struggled to maintain its book subscription service. It never did have many correspondents. In fact, in July 1959 the editors noted, “Letters from our readers commenting on articles and stories appearing in The Ladder are becoming fewer and fewer.

For the June/July 1971 edition the magazine published a letter from Donna Martin of Milwaukee. Since this was post-Stonewall, a seeming real name and not initials, as was usual in the past, might seem like a step forward. But it was a pseudonym sometimes used by Donna Utke. Just the year before Utke had been one of five brave people to be signed on as founding members of Milwaukee’s Gay People’s Union with her real name. Utke had attended U.W.-Madison graduate school in English, where she befriended fellow student and later Madison activist Barbara Lightner in the 1960s when both were closeted. A librarian with the Milwaukee Public Library, Utke also was an active member of Grapevine, a feminist writers’ guild, and in 1989 would help found the Lesbian Alliance of Metro Milwaukee (LAMM).

To The Ladder she wrote she had been an eager reader for months. She praised the efforts to relate to women’s liberation, since she also proclaimed herself a member of NOW. Donna claimed she found “camaraderie and relaxation” with her sisters at the local gay bar but intellectual excitement with her sisters at NOW. She noted that at the time Milwaukee had “the only Lesbian bar in the state.”

Donna advanced a theory of “sexual timidity” about lesbians, observing that lesbian bars were “everywhere far outnumbered by male gay bars.” She believed this led to a false theory there were less lesbians than male homosexuals. As she believed “suppressed” women were told to accept second best and not develop their vocational potential, so woman “is discouraged from developing her sexual potentialities.” Donna denounced that women should accept “the bleak joys of celibacy” for the unmarried woman after 30 who supposedly was presumed to lose sexual desire. Her tag was, “In short, in our society, women, like the spring ephemerals, seem doomed to a brief and fragile flowering.”

For her, women with “deviant proclivities” were subject to the same mechanisms that oppressed women in general. For her this meant, “the chances that the latent Lesbian will break out of her cocoon are, it seems to me much less than that the male homosexual will come to see himself as such.” She claimed at the time to be an unwilling celibate, not finding attractive and interesting women at the bar scene. She would later, however, find a life partner of many years.

Over the years, the volunteers who published the magazine had written about their growing pains and noted that the issues were often shaped by “funds available and labor willing.” When The Ladder ceased publication with the August/September 1972 issue, Barbara Grier, writing as Gene Damon, said, “Many women reading this will be upset, many will be sorry. None of you will be as sorry as we are to have to take this step.”