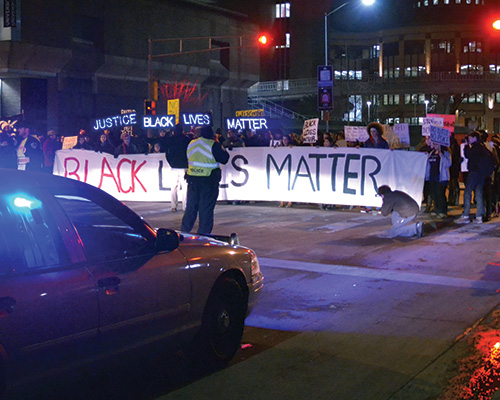 An Open Letter penned by the Young Gifted and Black Coalition (YGB) and the response from Chief Koval have deepened the conversation about racial disparities in Madison.

As Dane County leads the nation in racial disparities, particularly in the criminal justice system, there is no doubt that the world we experience is drastically different based on our race. We are very grateful to YGB for pushing this conversation forward, speaking honestly about experiences with police, and articulating a vision for alternatives. In reading Chief Koval’s response, we appreciate his honesty and good intentions to work for racial justice and many of the solutions he outlined in his statement for shifting institutional racism within the criminal justice system. At the same time, some of his responses highlight the gap in understanding the impact police presence has in communities of color. Though there is a need for protection and accountability in our communities, there is also a lived reality in communities of color that policing acts as an “occupying force.” This is what YGB is speaking to when they ask for alternatives and more community control.

People of color often have contact with the police and have done nothing wrong. As white folks, we do not have similar experiences. From people in our lives who are Black, we have heard of the following experiences happening here in Madison:

•   A Black woman is meeting up with a friend of hers, a Black man, to go for a run through a park one fall night after dusk. Despite the fact that she leaves her car with ankle weights and sweatpants on, two cop cars pull up and detain them both, charging the woman as a prostitute.

•   A Black man tries to attend his son’s elementary school graduation. He is unaware that he needed a ticket to enter and, while trying to explain the situation to the police officer at the door, hears his son’s name called. He leans into the door to glimpse him walking across the stage when the officer physically pushes him out of the doorway and onto the ground, then proceeds to arrest him.

•   A Black person pulls onto a main road on their drive to work. Several times a week, they find a cop car trailing them and running their license plates, trying to find some reason to pull them over.

•   A homeless Black person is on the lake fishing early one morning with all his possessions on him, including a sleeping bag. A cop makes an accusation that he must have slept in the park overnight, which is illegal, and arrests him.

These experiences are incredibly traumatizing, and we can completely understand how they can lead to a desire to have no contact with the police. Seemingly “neutral” police activities such as patrolling through the neighborhood, playing with kids in a park, and chit-chatting in the neighborhood are always overshadowed by the fact that the police have both the role and the power to drastically change the course of a person of color’s life in a moment.

For Chief Koval to call into question the desires of the YGB and then state he will actually increase police presence in neighborhoods can feel like a targeted threat, even when it is with the good intention of building relationships. It is understandable that the Chief perceives police as the “guardians of the community.” However, we cannot erase the lived experiences we wrote about above or the long history of distrust between communities of color and the police. It will take a long future of strengthening relationships for that to change. We encourage conversation and joint problem solving to make our community safer.

We strongly support the YGB and their desires to have more ownership and decision-making power about what occurs in their communities. We strongly encourage public entities, especially our local government and law enforcement agencies, to remain open to feedback and communication, even when it is difficult to hear or feels like an attack. The neighborhoods of color subjected to higher rates of policing certainly feel as though they are under attack. We believe we can all work through these challenges and come to a conclusion that works for everyone.

At the YWCA Racial Justice Summit in 2013, Dr. Eddie Moore, Jr. asked how Dane County could both lead the nation in racial disparities and be filled with such nice, liberal white people at the same time. Nice white liberalism may be exactly the force that allows those of us who are white to call out racial disparities while refusing to think critically about changing the institutions, systems, and structures that produce such results. As the YGB demonstrates, institutions, systems, and structures involved in producing these results involve the Madison Police Department and other local law enforcement agencies, although law enforcement is certainly not the only source of these disparities.

That being said, it is undeniable that the MPD and other local law enforcement agencies are the institutions responsible for arresting people: the entry point into the criminal justice system. If there were no arrests, entry into the criminal justice system would not happen. What would it look like to analyze the policies and practices in place that are disproportionately impacting communities of color and make change? Perhaps we can simply cease to arrest people for offenses that do not actually cause harm to others or impact public safety, such as upaid fines or sleeping in a park? And instead we can expand on our restorative and community-based approaches that are working to resolve problems in a deeper way.

Just as we are pointing the finger at the police department, we believe it is important to point the finger at ourselves. Because of white privilege, those of us who are white usually experience the police to be benevolent and helpful. We are conditioned to call on them for assistance whenever we have a problem, even for problems that could be better solved through direct communication between individuals, like calling the police on a neighbor’s barking dog or for moments when we confuse discomfort with being unsafe, like calling the police to report people yelling at each other on the street.

Neighborhood associations in Madison can also play into this problem when encountering challenges by calling for an increased police presence or successfully advocating for an increase in funding to the police department. Such a response comes both from a conditioned lack of creativity and absence of community-building to address issues in ways that get at the root cause as well as an entire worldview shaped by the experiences of white privilege.

We need to transform the systems that lead to extremely high arrest and incarceration rates of African Americans in Dane County or we will continue to get the same results. Those of us who are white especially need to reflect deeply on the ways we have come to value and trust the police, just as it requires the police to honestly acknowledge the ways they are complicit in a system that at the very least makes people of color feel unsafe and at the very most upholds racism. It should, of course, be emphasized that it is not law enforcement’s actions alone that uphold racism, but all types of institutions and cultural forces working together. Since this is the case, all of us need to engage in efforts to build alternative models for conflict resolution and accountability in our communities that are rooted in trusting relationships and effective solutions.

We thank YGB for speaking truth publicly about their experiences and desires about policing in our community. We thank Chief Koval for his open and honest response. Such deep, direct engagement is the only way we can continue to work hard toward building a world rooted in racial justice. Thank you YGB for helping to pull those of us who are white outside of our worlds of comfort and “niceness” and for asking us to critically reflect on the ways we are all complicit in a system that demonstrates Black lives don’t matter.
#blacklivesmatter.

Kristen Petroshius is the Executive Director of GSAFE. She’s also a member of Groundwork, a white, Madison-based racial justice organization that supports people of color working for racial justice.