Review of “Self-Made Woman: A Memoir” 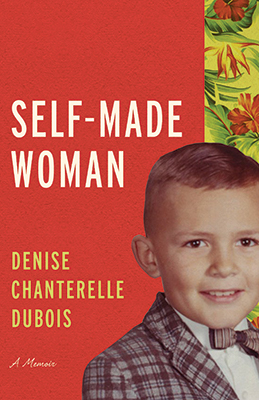 Your own two hands.

That’s what it took – plus a bit of paint, pencil, or pen, rouge and ribbon and rickrack—to make that of which you are proud. You did that. You made it with your own two hands. As in the new book Self-Made Woman by Denise Chanterelle DuBois, it takes a lot to craft a new life.

It began near a lakeside cabin in Wisconsin.

DuBois says she was four years old then, a curious little boy who loved the water—until he fell in and nearly drowned. Once fished out, he was dressed in girl’s clothing while his dried, and he was enchanted. He fought his mother’s demands that he return the clothing. That was the beginning of DuBois’ lifetime journey toward womanhood.

Though his parents were both alcoholics, and abusive, Catholic school nuns were the ones who showed DuBois that sexual stimulation could come from humiliation. In grade school, he preferred playing with girls because he was a girl himself, but teachers and nuns forbade it. When embarrassed in class, he felt stirrings; he asked playmates to spank him, and he learned to welcome negative attention.

This led to petty theft and a secret life: DuBois began sneaking into his sister’s closet to wear her clothing. He broke into random buildings to steal panties from strangers, and he lost a babysitting job when his client’s child caught him wearing his client’s lingerie; the ensuing embarrassment enhanced the experience. He dabbled in domination by being a slave to women who wanted his money. He experimented with drugs and alcohol; there were run-ins with the law. He became suicidal.

And yet—there were bright moments in his life. DuBois fell in love with a woman who went along with fetishes that had grown into full-blown obsessions. He made friends—albeit, friends who were into drugs. He got married. And he started learning what it would take to be the woman he always knew he really was…

Self-Made Woman is a lot of things. It’s sad. Poignant. Scary. It’s also TMI sometimes and, at just over 200 pages, it’s a bit too long.

From Wisconsin childhood to womanhood in Bangkok, author Denise Chanterelle DuBois tells readers of a multi-city, lifetime self-search, in an account that feels overly detailed and overstuffed. Reading it is akin to being held captive by someone who really needs to tell all, including unabashed details about the world of submission and female domination. Those details are titillating for those who share DuBois’ fetishes, but cruelty and graphicness make them wince-worthy. Add in memories of drug and alcohol abuse and an account of imprisonment that seemed rushed. You could have a mess of unreadablility were it not for the overall uniqueness, vulnerability, and the truthfulness in this tale.

When the story itself lags, those are the things that redeem it. They’re what make this matter-of-factly-told memoir one that sets itself apart by its brutal honesty. It’s what will make you want to put Self-Made Woman in your hands.

c.2017, The University of Wisconsin Press