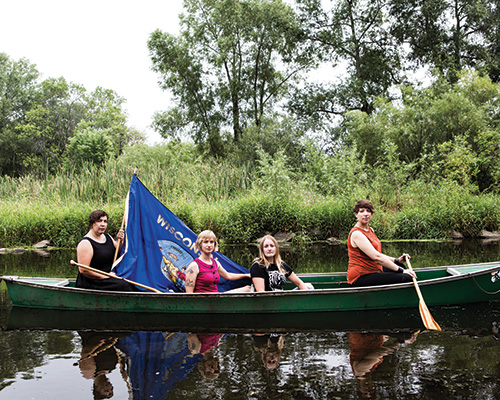 The keys to long-term musical success—to being in a band that’s more than just you and your instrument—are much the same as those that unlock the secrets to a healthy relationship: trust, communication, collaboration, compromise.

In a band, you get to add rocking out to the equation. And if you’re in that band with your best friends and significant other, it’s even better.

Bassist Natalie Hinckley and guitarist Victoria Echeverria weren’t a couple when they first started surf-rock outfit Venus in Furs along with drummer Marlo Dobrient back in 2010. Their relationship began soon after, though.

“It was really distracting, trying to play and she’s throwing herself at me,” Nat says with a laugh. “I just thought it would be a terrible idea. I’d just broken up with my ex, and I was thinking, ‘We have this fucking awesome guitar player, it’s going to be Fleetwood Mac: it’s going to destroy the band if we get together.’”

“I think it makes you more like ABBA,” Marlo interjects wryly.

For Victoria, making music with Natalie makes perfect sense. “It’s part of why we fell for each other—playing music together,” she says. “Growing up, my dad used to play guitar with me. And Natalie being a musician, it just felt like, ‘Oh, this is family.’”

The band has since added former Screamin’ Cyn Cyn and the Pons guitarist Cynthia Burnson, a line-up that makes for a fuller sound as well as an additional voice.

Begun with the mission to “play surfy dancy punk enthusiastically, loudly and in 30-minute increments in the service of encouraging drinking, jumping, dancing and being happy for everyone,” Venus in Furs has largely remained true to that glittery dream. Their debut 2011 album, Welcome to the Club, was a delightfully gritty and danceable ode to classic surf rock, with elements of disco, punk and garage to mix things up. There are instrumental numbers to enjoy with abandon, and lyrical numbers that run the gamut from silly fun to in-your-face political.

The band is now preparing to release their second full-length effort, Just Try It On, with a record release show September 26 at the Frequency in Madison. The new album promises to build on their eclectic passions while maintaining a fierce commitment to having a good time.

“I really love the songs that we’ve written over the last year. I feel like the songs have gotten much more complex, musically,” says Vic.

“You can really tell the difference between the ones we all wrote together and the older songs,” Cynthia agrees.

The band worked with engineer Meghan Rose, herself a musician, at Clutch Sound (in the former Smart Studios) to record the album in a professional setting. For Marlo, it was the first opportunity she’d had to experience that kind of set up, and she says it paid off. Marlo also provides vocals on a track for the first time, on the sly ode called “Rodeo.”

As for their hopes for the new record, Nat says, “Well, Marlo is about to have a baby, so we’re going to give her space for that. But we’re definitely going to shop it around town, play some shows when we can.” They hope to go back out on tour as soon as they’re able, too.

Venus in Furs have hit the road before. An east coast tour after Cynthia joined the band brought them to a much wider and more diverse audience. For instance, Screamin’ Cyn Cyn front man and queer raconteur Shane O’Neill (aka Shane Shane) set them up at a queer showcase in New York City, which resulted in at least one particularly interesting fan interaction.

“I got asked out on a Facebook date because of that show,” Cynthia laughs. Another band on the bill joked that Shane had told them Venus in Furs was “75% lesbian. And they joked that they wanted to know which six hours of the day we all dated men.” Shortly thereafter, a stranger who’d been at the show reached out to Cynthia on the social networking site: “He said he hoped I was the 25% straight part of the band.” Which she is, but she’s also married and has a kid.

“I feel like 90% of my musical career has been based on riding the coattails of queer people,” she quips. 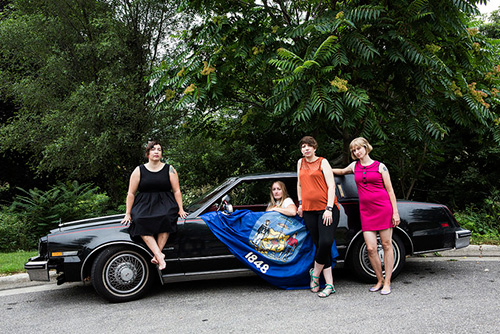 The band likes to note that their songwriting process is very collaborative and egalitarian, explaining with no small amount of Madison-self-awareness that vocal duties are “shared communally via a vocal wheel posted in a prominent place in a shared space.” They rarely argue. No one person is considered the front person.

They describe their sound as being like the soundtrack to a B-horror movie beach party with feminist zombies, and it’s an aesthetic that has won the group a solid fan base in the city and beyond.

People seem to especially appreciate that commitment to silly good fun mixed with the occasional serious subject. Their songs address issues that impact their lives, from the current state of affairs in Wisconsin and government influence (on songs like “Left Mitten” and “Fan Death”), women’s rights (“70 Cents,” “Future”), and gay rights (“Disco,” “Crimson”).

“There is so much going on in our world right now,” explains Vic. “There’s no way we could sing soft and sweetly about things. We have to scream.”  —Emily Mills