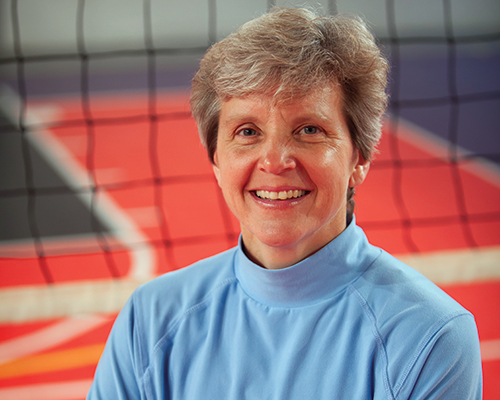 To this day, I am thankful for athletics. They became my safe haven at an early age.

I have reached the age of 50! This is significant because my mom died from heart-valve complications when she was 33. I was 10, and I thought I would never make it past my mom’s age. My childhood became a harsh reality, not a fantasy of a wholesome family. My dad did the best he could to raise two sons and me, his only daughter. He always provided the material things, and Grandma, my mom’s mom, provided the love, with lots and lots of big hugs.

You see, my dad’s side and my mom’s side were complete opposites. My dad’s parents did not support the marriage—they thought my mom was “from the wrong side of the tracks.” My mom’s family liked to drink and smoke, and my dad’s side followed the “good old Catholic” traditions. My dad’s family was not demonstrative in their affection. Why am I telling you all of this? I found that these childhood experiences affected me in ways I just didn’t understand until I was in college.

I have always been a competitor. As an eighth-grader, I was on the varsity high school softball team as the shortstop. Oh man, did I grow up fast! The seniors on the team would always pick me up at home for practices and games while my dad was at work. I was lucky that I was gifted athletically. It was reassuring to be the one who was always picked first in a neighborhood or school game of cops and robbers, kick the can, or capture the flag. I have always felt that God blessed me with athletic talent to keep me and my dad busy while mourning my mom’s death. My brothers followed me and were my number-one fans. I was a four-sport athlete in high school, playing volleyball in the fall, followed by basketball (6 on 6), track, and softball in the summer. I was blessed enough to earn a total of 16 varsity letters.

Even though the athletic arena was a safe haven, it also put me in the category as a “jock,” and that seemed to become my sole identity. I appreciated being acknowledged as a great athlete, but I wanted to be more. I wanted to be loved for other reasons and in other ways. I felt perfection staring me in the face, but perfect for whom? For me, the bottom line was that I just wanted to be loved and liked by others. I felt out of control in the rest of my life. My outward appearance looked ugly to me. With the stress of it all, bingeing and purging plus alcohol were ways I could feel I had control. My image was important to me. I even dated the homecoming king when I was a sophomore in high school.

Dating and drinking seemed to be the way to make myself feel loved. This behavior continued through college, which was the time that I started questioning my sexuality. Because perfection was my goal, though, I tried to be “in the norm” by dating men. This behavior went on for years, with me thinking I had to find my “knight in shining armor.”

Despite my ongoing drinking, I still was able to excel in athletics. I received an athletic scholarship at the University of Nebraska, earning All-American honors. I went on to fulfill my goal of becoming an Olympian, going to the Olympics in 1988. What an experience! By this time I was training seven days a week in San Diego, traveling the world, and trying to take credits to finish my degree. The stress level was high for me, still confused about my sexuality, fighting for playing time, and trying to be this fit and skinny athlete. Again, I felt like I needed to have some sense of control. With alcohol and bulimia, the road was a difficult one.

In the fall of 1985, I experienced a “come to Jesus” moment. For the first time, I found someone who loved me unconditionally. Were things great after I acknowledged Jesus in my life? Not quite. I still had my battles with bulimia, sexuality, and being a perfectionist. After the ’88 Olympics, I went back to Nebraska to finish my degree and to be an assistant coach to their nationally ranked volleyball team for 10 years. During the transition I was wishing that I had the courage to be who I really was, a lesbian. The option of being out became more difficult when I got involved with a fundamentalist church where gays and lesbians were considered sinners. Aren’t we all sinners, I thought? So, I started dating the youth pastor for a year. It’s ridiculous how one’s mind works. I could have married this guy because it was the “right thing to do in the eyes of society.” It’s still scary for me to think about.

At the time, I was enjoying being a coach and a positive role model for my players. However, I was not happy with my sexual orientation. I poured myself into my work, leaving the office at 10 p.m. every day. I was avoiding even the possibility of socializing with the gay community. I had a reputation to uphold, I just couldn’t put my job into jeopardy, what would people think? Even through my battles, I continued to be a top volleyball clinician throughout the country. I certainly loved this platform to teach and have coaches or players learn life lessons through volleyball.

I finally faced the truth when I was in the last few years as assistant coach at Nebraska. In 1998, I decided to resign my position so I could be free to be my authentic self and to have a child. I was so excited to find my partner, Eldonna Hazen, in 1993 and to have a life with someone I loved. I gave birth to our son Spencer in 2000. Eldonna’s goals included becoming a minister. We moved to the Twin Cities for her to go to seminary. I accepted a position as assistant volleyball coach at Macalester College in St. Paul, so I continued with my goal to train athletes to be the best they can be and to leave their training with great confidence.

In the meantime, after three years at the seminary, my partner and I were awaiting a ministerial call. She finally landed a job as the Associate Minister at First Congregational United Church of Christ in Madison, Wisconsin. After seven years at the church, she was recently named the Senior Minister. The move to Madison was a blessing for our whole family and a great place for me to stay involved with the volleyball community.

These days, I am a director of skills development of a volleyball club program and give private lessons. I have continued to stay active in the USA Adult Nationals, receiving several tournament MVP awards. I was recently even inducted into the Volleyball Quad City Hall of Fame.

Although I lost my mom at a young age, and my life took so many different twists and turns, I wouldn’t change a thing. My faith has strengthened me through it all. My mom’s spirit has given me great strength throughout the years, too. I know she would embrace my life and love my partner and her grandchildren. My number-one fan continues to be my dad, and he is so proud of me. My partner Eldonna and I have two-and-half-year-old twins, Carlyn and Aiden, and Spencer is now 12.

I grew up fast. Without the consistency and opportunities athletics provided, I have no idea how my life would have been different, given the challenges of addictions, alcohol, sexual identity, and family dynamics. I have had incredible, positive experiences that have shaped me into the person I am today. I’m grateful to have the opportunity to be a positive role model for the athletes I train today. Blessings abound!