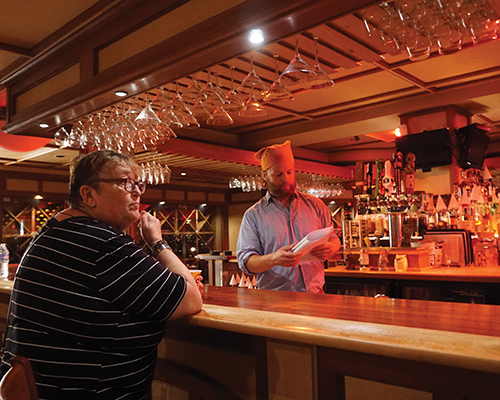 They first met a year ago. Linda Lenzke had an idea for a play that would use religious themes to challenge beliefs and tell new stories. She knew Mark Albright from a LGBTQ Narratives group and his years of experience with theater and casting. Bob Barhite had been writing scripts for three years and attended a Madison Indy Filmmakers showcase where Linda pitched the idea.

The result: “Hotel Bar” is a web series being produced in Madison. Though the city may not be the first place that comes to mind when you think of film production, these folks are working to change that.

The concept of “Hotel Bar” is simple: Instead of guarding the pearly gates, St. Peter is a bartender and everyone who comes into his bar is on a pit stop between death and their eternal fate. Peter needs to learn each person’s real story before sending them on their path.

What is most striking about the production of this web series is the number of volunteers involved and the mobilization of resources they bring. Around 35 people come to filming sessions and there are 60–75 people involved overall. There’s high-quality audio and film production in addition to the donation of The Brink Lounge space.

Among the leaders who are attracting talent—from casting to production—is the director and co-producer, Gary Dunham.

Dunham retired after more than 30 years in the film business in Hollywood to move to Madison to be near family. But he says filmmaking gets in your blood and never goes away. He taught film technology, fundraising, and distribution at Madison Media Institute and stays in touch with his students, some of whom have stayed in Madison and who work on the “Hotel Bar” set.

“I found there are a lot of very talented people here who aren’t willing to sacrifice their lives and lifestyles to pursue their career in filmmaking—and they shouldn’t have to,” says Dunham. “I went to the Madison Indy Filmmakers just to see who was interested. That’s when I met Linda. It was her passion and commitment to chasing this solid idea against all odds that got me interested in ‘Hotel Bar.’”

With the unique production elements of filmmaking, the creators of “Hotel Bar” know what they’re doing has roots in the theater scene, while also providing something completely different for the actors and producers who are involved.

Brian Belz, who plays Saint Peter, acts mostly in theater, but has worked in film projects since 2005. It was his friendship with casting director Mark Albright that got him involved with the web series. Project leaders agree that Belz’s style influences the other actors and he uses his instincts to set the pace.

“Film and theater acting are so different,” says Belz. “In film you have to stay in the frame and work within some limitations of volume and projection. You can’t immediately be big like in theater, and there are more starts and stops. But I enjoy being involved with a team for both.”

As director, Dunham isn’t spending his retirement lightly. He wants the projects he works on to be teaching experiences for the people who work on them and to educate future Midwestern filmmakers who choose Madison over Hollywood. He has a vision for a filmmaking scene in Madison that is self-sustaining and, though “Hotel Bar” is currently a volunteer-driven project, he believes local filmmaking should eventually provide a living wage to its contributors.

“What’s next for filmmaking in Madison, and this web series in particular, depends on sustainability,” says Dunham. “That means distribution and fundraising. ‘Hotel Bar’ could be a flagship for that idea. I have high hopes, but the biggest problem you have is if you succeed because then you have to start producing with deadlines and pressure. You have to be prepared by building your team and letting them rise to the occasion.”

For Linda Lenzke, being a producer is ultimately about doing what it takes to see her idea come to life.

“Originally I thought I was going to write the screenplay,” she says. “And I took a stab at it. But I realized that I’m not the fire. I just stoke it. These people are the fire and it’s the group that’s making it happen.”

The producers of “Hotel Bar” are always looking for extras. As in life, purgatory is a diverse place and all races, genders, sexual orientations, and abilities are welcome to drink prop liquor and be a part of Madison filmmaking in the making