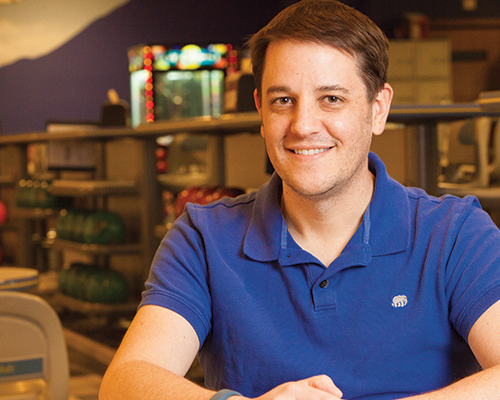 Over the past several years, we have all seen a surge in the number of leagues and social groups organized by the LGBTQ community. And although bowling was one of the first formally organized in Madison, the sport has seen an overall decline in participation in the last 20 years. According to the United States Bowling Congress, the sport has seen a steady five percent drop in participation each year. However, the Honeymooners league is going strong!

Most recently in 2012-2013, the league experienced its sharpest decline in participation ever, dropping from 13 teams to seven. Perhaps it was participation in other leagues, or maybe money was tight for others. It could also be partly because the leagues have never had any sort of formal recruiting network other than word of mouth. Many of the people have been in it for years. Sometimes they drop off for a year, but then many resume the next year. Some choose to substitute in order to remain connected to the league yet have less of a time commitment.

After the sharp drop in numbers, a formal, although limited, recruitment effort was organized for the first time. The WOOF’s Block Party proved to be a great event for us, as we were able to promote the league with attendees. For the first time, too, we entered into the world of Facebook (Honeymooners Bowling League). Through all of this, we discovered that bowling is still not exactly easy to promote. Word of mouth and recruitment of people who were formerly in one of the bowling leagues proved to be the most successful method.

Some people do not understand the appeal of going out bowling on a Monday night. But when you talk with the members, you quickly learn what the appeal is: It’s not the drinks or the competition or even the actual sport. People are in the bowling league because they have fun, and many have made lifelong friends there. Many of the long-standing bowling league members continue to bowl only because the people who meet weekly through the bowling season are so amazing. They are inviting, friendly, and wonderfully diverse.

It is not shocking that the league consists of a diverse group of people: all ages; men and women; gay, straight, and otherwise. The league is not highly competitive in nature and represents all skill levels. Bowler averages range from 70 to over 200. While score is kept, the league is mostly focused on a fun social environment.

Bowling happens on Monday nights: machines are turned on at 7:45 p.m. for an optional 15-minute warm-up. Teams bowl three games weekly and are usually done by 9:45 p.m. People interested in bowling are encouraged to visit the Facebook page for more information, or stop by Village Lanes in Monona on Monday nights. You do not need to be a member of the league to support the league and socialize.