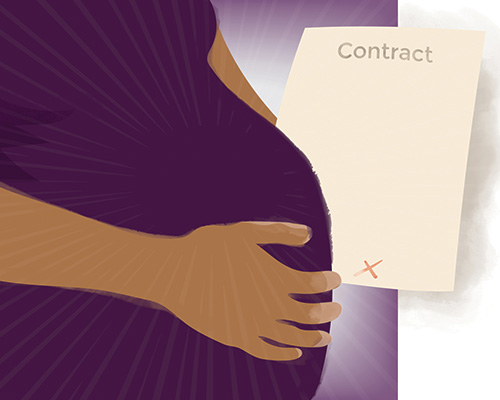 Greg and Guillaume of Paris, France, welcomed their baby daughter, Emilie, on December 29, 2013. She was born via a surrogate gestational carrier named Jackie, and her dads couldn’t be prouder parents.

“We’re so happy to have our lovely baby girl, and we’re very happy to have Jackie in our lives,” says Greg. “It’s been so fulfilling that we want to have another child the same way.”

He and Guillaume spent about five years preparing—exploring options, saving money, talking with each other about their expectations and readiness—before beginning the process.

“Surrogacy is illegal in France, so we looked at other countries,” Greg says. “In the U.S. it’s controlled, ethical, and legal.”

After investigating many agencies, they talked with Mary Murphey, program director at The Surrogacy Center in Madison. “We belong to a gay parenting association and a lot of people had worked with the center,” notes Greg. “When we talked with Mary it just felt right.”

They’d been concerned about surrogacy, thinking it would be the “traditional” process, where the surrogate uses her own eggs and either donated sperm or an intended parent’s (IP) sperm to form embryos. But today most surrogates are gestational carriers (GC), where donated eggs join with sperm to form embryos. The GC has no genetic connection to the baby; she supplies the uterus.

“With traditional surrogacy I felt like we’d be taking someone’s baby,” Greg explains. “But we had an anonymous egg donor and some embryos with my sperm and some with Guillaume’s.”

Greg is Emelie’s biological dad, and the couple is already working with The Surrogacy Center and Jackie to have a second child with Guillaume as the bio-dad.

Surrogacy isn’t a simple or an inexpensive process. That’s why it’s important to have expert guidance. “If you don’t have your i’s dotted and your t’s crossed from a legal standpoint, for instance, you can really run into problems,” Murphey says. “It takes a whole team of people, and we help assemble the right ones.”

Her agency matches IPs with a GC, conducts in-depth psychological screenings of both to ensure readiness and suitability, and connects them with medical resources that can assist with egg or sperm donations and implant embryos in the GC’s uterus. They also ensure that both parties have appropriate legal representation and that needed contracts are in place. Three attorneys who had founded The Law Center for Children and Families opened the Surrogacy Center in 2002, to provide a safe, professional, and legal way to navigate the process.

Murphey works with attorneys such as Theresa Roetter of Annen Roetter, LLC. She’s practiced for 21 years in family formation and protection, including adoption and surrogacy cases. She works with straight couples, as well as lesbian couples using egg and/or sperm donors for medical reasons, where one woman gestates. She also works with men or women using a surrogate. Most lesbian couples don’t need a surrogate unless neither woman is able to gestate.

“I do a lot of informational gathering,” says Roetter. “I help people put their teams together if they’re not already in place. It’s very individual—I’ve seen people who live in Wisconsin, have an egg donor in California, and a surrogate in another state. But if they want to go to all of the surrogate’s doctor appointments, for instance, geography is very important, and they might choose local team members.”

“The legal and medical sides go hand in hand, and clinics often won’t move forward with the process unless they have legal contracts,” she adds. “I make sure the egg donor and the surrogate also have legal representation. There’s a contract between the IPs and the egg donor if they’re using one, and a GC agreement if a parent can’t gestate.”

She prepares contracts and sends them to the parties’ attorneys, and they negotiate until satisfied. “Then there’s the medical part,” says Roetter. “I’m not usually involved again until there’s a pregnancy. Then I work to ensure that both parents can be on the birth certificate and that the surrogate is protected from responsibility for the baby.”

On the medical front, after undergoing fertility testing, male IPs have one or both partners’ sperm joined with donor eggs to form embryos. The Wisconsin Fertility Institute, co-founded by David Olive M.D. and Elizabeth Pritts M.D., both of whom are certified in reproductive endocrinology and infertility, conducts this and other surrogacy-related procedures.

The doctors also prepare the GC’s uterus and implant embryos according to the IPs’ wishes. The GC usually receives care from her own physician during her pregnancy.

For female IPs, the doctors retrieve and test the health of the IPs’ eggs and each partner’s ability to gestate. They mix donor sperm—which the IPs choose from a sperm bank—with healthy eggs, prepare the uterus of the partner who will gestate, and implant one or more embryos. If there’s a medical reason neither partner can gestate, the IPs use a GC.

“It’s possible to use known sperm donors, but it’s complicated,” says Olive. “The FDA requires rigorous testing, and it must be performed within seven days of obtaining the semen sample. Thus, if a number of samples are desired—such as for use in inseminations—either they must all be obtained over a 14-day timespan or testing must be done multiple times.”

Sperm and egg banks have websites where IPs can find Mr. or Ms. Right, as Olive says. “We have a big university here with plenty of young, healthy grad students who donate for the money and to help families.”

The donor and GC side

Jesse Skalitzky knows the donor process firsthand. She’d been an embryologist at UW Hospital before staying home with her children, and her former coworkers knew a couple that was having trouble finding an egg donor. She decided to donate and loved doing so.

“But I wanted to do more,” she remembers. “I was 24 and had two daughters and a son. My family was complete, but I couldn’t process the idea of never being pregnant again, so I decided to be a gestational carrier. My family has been very supportive.”

She carried three times, twice for the same couple, and had three girls. She keeps in close touch with the families, and her oldest “surro baby” is seven. “I love being pregnant, and I’m good at it,” she says. “Each pregnancy was successful the first time around.”

Since 2010, she’s run Pink & Blue Surrogacy, LLC, in Waterloo. “It’s a natural extension of something I’m so passionate about,” she says. “We’re actively involved the entire time for both the intended parents and the carrier. We manage the business aspects so they don’t have to and work with legal and medical professionals.”

Steve and Trevor of Dane County are just beginning the surrogacy process, working with Christie Olsen, founder of Forward Fertility, LLC. She’s a nurse practitioner who worked in reproductive health for many years before founding her agency to shepherd couples through family formation via surrogacy and/or donor eggs.

“We originally looked seriously at adoption,” says Steve. “It seemed like the most logical choice, but we didn’t know how much adoption had changed.”

In years past, county social workers had lists of pregnant women to match with prospective parents, Olsen observes. “It’s so competitive now. Almost all are open adoptions (where the adoptive parents and biological moms interact), and it’s like a popularity contest. You have to sell yourself with YouTube videos and a website. And international adoptions have become so much more difficult, especially for same-sex couples—some countries are very close-minded.”

When Steve and Trevor talked with Olsen, “We just clicked,” Steve says. “We knew she was the one we wanted to work with. Her style is a great match for us.”

Adoption and surrogacy are both expensive, but they wanted the genetic connection to their child that surrogacy provides. “Christie had just found a woman willing to be a GC, and she asked us how quickly we were willing to move,” says Steve.

“We met her, and that also clicked,” he continues. “We chose an anonymous egg donor from Forward Fertility’s egg donor database. We don’t know each other’s names, but we know her statistics—height, weight, health background, family history. Her profile tells us what she’s done with her life and why she wants to be an egg donor.”

The couple plans to use both their sperm to create embryos and have one from each implanted, so hopefully they’ll have twins that are half-siblings. They hope their GC will be pregnant by January.

“We’re not sure yet what our options are in terms of the number of tries,” Steve says. “We’re very committed to it, and as long as there’s a good chance, we’ll try. If not, we’ll need to re-look at our options.”

“It’s very complicated and gets more expensive with each try,” he adds. “But we didn’t expect it to be perfectly smooth. It would be that way even if we were a heterosexual couple. It happens when it’s meant to happen.”

He and Trevor always knew they wanted kids. “We feel so blessed that this is an option for us,” Steve says.

Judy Dahl is owner and principal of JKD Communications, which provides freelance writing and editing services to clients such as Madison Magazine, Credit Union National Association, AIDS Network, and the Greater Madison Chamber of Commerce. She has two NYC-based daughters and two canine interns and is proud to have completed the 300-mile ACT 12 bike ride this summer.