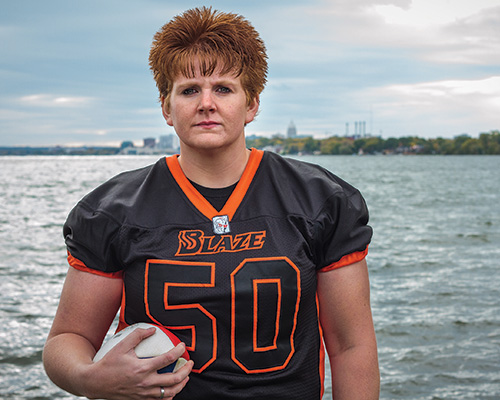 When I talk to people about playing women’s football, it usually begins with a variety of questions: Is it powder puff? Do you play on that lingerie league? Is it flag football? The answers are no, no, and no.

Madison Blaze Women’s Football is a full contact team that is part of the Independent Women’s Football League (IWFL). I never imagined I’d actually get the chance to fulfill my dream, especially at this level of competitiveness and professionalism.

My love for sports started at a very young age. I was always involved in activities ranging from soccer and basketball to powerlifting. While those sports allowed me the active lifestyle I craved, it still wasn’t my dream. Every Friday night I would attend my high school football games thinking, “I could do this, and even better than the boys!” I never gained enough confidence to try out, but it was always in the back of my mind. As I continued into young adulthood I took my love for sports into the classroom and graduated from Winona State University with a degree in Recreation and Tourism. Shortly after, in the summer of 2010, I made my big move to Madison to intern for the Badger State Games. As an intern, I was part of the event operations team, and we organized and conducted the Summer and Winter Badger State Games. This experience opened my eyes to a variety of sports and showed me the level of competitiveness and athleticism that would make me want to stay in the Madison area.

After my internship ended it left me looking for ways to meet new people and continue living an active lifestyle. I joined the Badgerland Softball League and became a part of the infamous Pretty Pink Princesses. I also gave hockey a shot with the Madison Gay Hockey Association. As luck would have it, a friend of mine told me about an all-women’s football team and encouraged me to try out. I was excited to finally make that thought in the back of my mind become a reality.

The day I showed up for tryouts I didn’t know what to expect. Being in an unfamiliar situation, I was naturally nervous and shy. My football knowledge was very minimal and stemmed mostly from watching the Packers crush their opponents on Sundays! From the moment I left tryouts I knew I’d be back for more, and I was right. I was immediately pegged as a tight end because of my height and ability to catch the ball. I also found more playing time on the d-line at defensive end. After getting a taste on both sides of the ball, I found my passion is at offensive tight end. This position would not only help shape me as a person but also my confidence on the field.

In my first year as a women’s football player, everything happened in slow motion. The concepts a male might have learned in pee wee football I was learning as an adult. One of the biggest challenges was overcoming the mental aspect of football. I quickly learned that mental toughness was just as important as the physicality of the game. Lining up against five linewomen all looking to crush anything in their paths is very intimidating. As I gained better technique, became more aggressive, and rid of any doubt in my mind, the tables soon turned. My confidence soared as I was starting to make technically sound tackles, blocks, and catches. After each practice, chalk talk, and game I continued to grow. Scoring my first official touchdown was something I will never forget and made everything come full circle.

Joining The Madison Blaze was the best decision I could have made because of what it continues to teach me. I just completed my third season and have been able to grow in many areas of my life. Playing football requires a great deal of focus and commitment, which has allowed me to become a well-rounded, improved individual. Not only has football helped me grow as a person, but also it has allowed me to meet an amazing group of women with the same drive as me. We are a close-knit group that works together on and off the field for each other. It truly is a family; I know that they will always be there for me whether I am at the top of my game or on the bench with an injury. Not only have I met many friends, but I also met my wife, Staci. Having Staci there to support me 110% makes playing football even more amazing.

Every season the Madison Blaze puts in the blood, sweat, and tears to get to the top. At the end of our 2013 season we became the Midwest Division Champions. This past season we upgraded to the two time Midwest Division Champions! The Madison Blaze took the next step in the 2014 season and also became the 2014 Founders Bowl Champions. The Founders Bowl title has extra meaning because the teams were selected by the IWFL. The best part about playing for the Madison Blaze is no individual won games or made huge plays. We did it as a team, and we are all champions!

Being a woman football player is one of my best accomplishments and something I will continue to do as long as I can. If you want to join me on the field and share in the pride of being a Madison Blaze player, come to a tryout for the 2015 season, look for information on Facebook and our website, and GO BLAZE!