Taking art to the streets

Madison and street arts have a long-complicated relationship. City policies strictly regulate art in the public realm. Historically, unsanctioned images, words, and objects—such as the decorated piano deposited at the top of State Street a few summers ago—are promptly eliminated, usually at the property owner’s expense. This has created hard feelings between street artists and those who have been slapped with the bill for removal.

Because I work as the City’s arts administrator, in the very department that is responsible for enforcing Madison’s zoning codes, sign ordinances, and urban design guidelines, I am often a first responder when City policies clash with independently produced artistic expressions. It can be painful to witness the confrontations. Fear, naïveté, and anger often operate in ways that squelch my personal ideals of what an equitable participatory democracy looks like.

Two years ago, into the fray of opinions between the genteel aesthetic that has long-dominated Madison’s regulatory policies and supporters of the underground arts movement, entered James Gubbins and his street art business on Madison’s east side. Opened in 2017, Momentum Art Tech, at 195 Cottage Grove Road, is a store where people can pick up paint, brushes, clothing, or a lesson in graffiti. 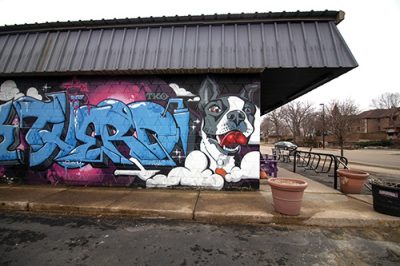 Gubbins, a former marine and father of three, believes that Madison could benefit from a cohort of artists trained in a medium conducive to producing work that is easily understandable to many, quickly created—between a few hours and a few days, and are intentionally impermanent. Over the last couple of years, Momentum Art Tech has gradually adopted walls belonging to Monona businesses and demonstrated that street artists are not the enemy. Instead, they can be some of the public’s best allies in placemaking, a trend in community building that uses the tagline: “lighter, quicker, cheaper.”

In the past, when people asked me where they could see graffiti art in Madison or why Madison does not have more street art, my tongue tripped over what sounded like an embarrassing bureaucratic excuse for institutionalized systems that privilege some people’s aesthetics over others. Tolerated, as long as they were relegated to spaces outside of public view, and not within more mainstream environments, street art was hidden in places like behind the former iteration of the Garver Feed Mill. On the one hand, it was an expansive gallery that showcased some of the area’s best talent, but on the other hand, it was sort of a visual don’t ask, don’t tell graffiti closet where artists shared their work. In order to practice, they also risked getting caught breaking the law.

There were some legitimate efforts to celebrate street art, such as the well-loved permission wall at Mother Fool’s which has showcased rotating, temporary murals since 2001. And about a decade ago, Kimberley Coonts created “Kilroy’s Art in the Park” with and for local graffiti artists, but frustrating hurdles caused them to stop producing the event in 2010.

Of course, Madison also boasts of being the hometown of Solve (Brendan Scanlon), a legend in the street arts community whose life was taken in 2008, when he was only 24. He left a lasting legacy that inspired new generations of artists. The You Are Beautiful mural on the side of Art In for example, created by teens in 2016 through The ArtWrite Collective, is a tribute to Solve, whose Chicago crew put up many similar murals. 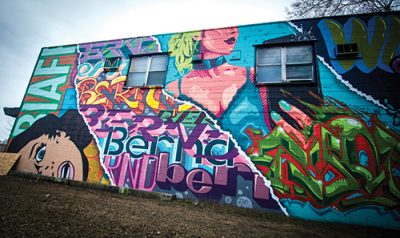 For the last two years, Gubbins and artists connected with Momentum Art Tech Madison, have been demonstrating how street arts can beautify a neighborhood, transforming Monona Drive’s previously unnoticed spaces into a corridor of vibrant color. This year, Momentum Arts is collaborating with the Monona East Side Business Alliance to create Momentum Urban Arts Fest, an all-day live street art event. More than 50 artists from all over the country will participate in creating street art on buildings up and down Monona Drive and on Madison’s east side. Viewers will be able to watch live production, between 9:00 a.m. and 9:00 p.m. on August 24.

You could say Momentum has created its own momentum for street art in our region. Initiatives, such as Wisconsin Institute for Discovery’s new “Science to Street Art” project, directed by Ginger Ann Contreras, will pair local and internationally known street artists with scientists to create science-themed installations throughout Madison.

Contreras aims to simultaneously address the lack culturally relevant public art and attract youth to the sciences. Stefan Matioc’s signature cubist line art has appeared all over Madison in locations such as Lucille, Banzo Shuk, Next Door Brewing, Good Style Shop, and The Sylvee. And this August artists Goldie Bennett and Henrique Nardi are teaming up to create a wheat paste mural for the side of North Street Cabaret called War of the Worlds. Their work will be up in time for the August 17 Eken Park Festival.

Madison is shifting demographically. As we become a more diverse region, we need to correct the ways racism, classism, and other prejudices have contributed to policies that exclude the aesthetics of hip hop, youth, queer, and other cultural expressions previously treated as insignificant or unwanted.

For Madison to thrive as a healthy and vibrant city, we need to encourage all to participate in shaping our environment and making our community a more welcoming and beautiful place. 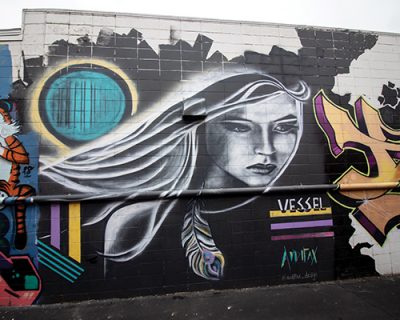 Disclaimer: In my work for the City of Madison I connect artists and non-profit organizations with opportunities and resources, and support diverse forms of artistic expression. My thoughts about street art do not necessarily reflect the views or opinions of the City of Madison or the Madison Arts Commission (MAC). However, MAC does support graffiti arts and has provided grant funding to organizations advancing the street art aesthetic and individual street artists and is providing grant funding for Science to Street Art and the North Street Cabaret Wheat Paste mural.

Correction: The print version of this article misspelled James Gubbins name. It has been corrected in this version.