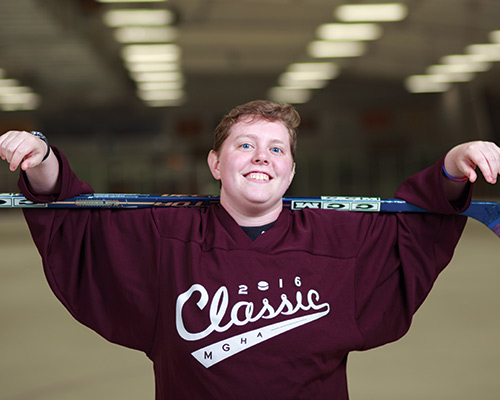 The evening after the first new player clinic I went to IHOP and ate two entrees, then went home and watched six hours of hockey games on YouTube.

It was my first hockey season, despite first pulling on skates at age three. I’ve played competitive sports since age five, and every team is a little different. Every season has its own challenges. This year, while learning a new sport was a challenge, my biggest struggle was mostly off-ice: confronting my gender identity.

The inclusive atmosphere cultivated from the word go in the MGHA, and the people I became friends with through the season, made coming out to my teammates and later the rest of my friends and family a far simpler experience than it could have otherwise been.

Moving to the Midwest after growing up in Massachusetts was a bit of a culture shift, even with the understanding that Madison is quite liberal in comparison to the rest of the state. Gender role expectations played a little heavier into everyday interactions, even within the queer community. I found myself dreading otherwise enticing work opportunities because I’d have to wear feminine business clothing, rather than my day-to-day jeans and a hoodie. I’d grown accustomed to the groaning of friends in college about formal clothing, so it came as a surprise when many of my coworkers sounded like they actually enjoyed putting on dresses and makeup. It became clear to me pretty quickly that something else was going on for me, that it wasn’t just being gay and not liking to dress up that was bothering me.

Playing sports growing up meant that I constantly defined myself as an athlete. Being an athlete meant I got to express myself on the court or field, whatever the designated playing surface was that day. It also meant that I got to wear sweats as my peers were experimenting with miniskirts and tight shirts because I was always coming from or going to sports practice.

Upon leaving college and moving to Madison, I lost that label for a while. I tried a few different sports and activities; soccer, karate, yoga, Crossfit, marathon training, but nothing stuck. I started playing softball with Badgerland last summer, which got me connected with a second softball league, and soon I was playing three times a week and started being able to call myself an athlete again.

Getting into the MGHA was another step in the direction of feeling comfortable and confident in my skin again. Starting to play in the MGHA was like coming home, where home is a semi-resurfaced sheet of ice and a rowdy crew in the locker room.

My identity as an athlete had a huge impact on my internal dialogue around gender. Much of the sports I had played prior to the MGHA were highly gendered, and even coed sports had rigid rules about how many girls had to be on the field at any given time. I was terrified that by coming out, I would lose everything I had worked hard to gain back over the last year. The relaxed coed play of the MGHA gave me the space to contemplate what transitioning while maintaining my identity as an athlete would look like.

A lot of the MGHA essays talk about finding a community, and they all use the phrase “LGBT.” I’ve been a part of several gay communities, but never one as gender identity inclusive as the MGHA. From shining a light on “Hey some of your teammates might be trans” at the new player orientation, to making sure everyone on the team knew what pronouns their teammates preferred, I found reason to hope that being true to my gender identity wasn’t going to turn me away from the new-found friendships and inklings of community.

Even with an extended internal dialogue and the experience of seeing happy trans and non-binary hockey players, it still took me four months into the season to say the words “I’m trans” out loud to another person. From there, it was like a Band-Aid was ripped off, and each positive, affirming reaction made me want to tell another person, so that four months after that first admission I’ve come out at work, come out to my 400+ Facebook friends, and started hormones. I’m fairly certain I never would have made it here without the MGHA.

There’s one final anecdote that set me on the path of writing this as my MGHA story. The weekend I decided to come out to my teammates, I had gone to the Twin Cities to see Minnesota play Wisconsin, and while sitting in my hotel room Sunday morning, I hastily typed out a coming out email to the team. I spent an hour deciding what to title it, another 30 minutes deciding whether I was ready to send it, and at least a shower-length regretting sending it before reading any of the responses. At my MGHA game that night, after a day of being buoyed by positive responses, I scored my first goal of the season.