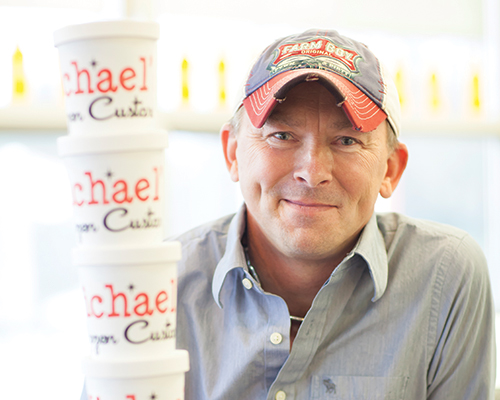 “You’re no Craig Culver,” I banter with the slight, athletically built man in front of me.

He grins boyishly, and it’s that much easier to see how this whole thing started taking shape in his childhood in Milwaukee, chipping ice off the lake to make frozen custard with his mother and brother from his grandmother’s five-ingredient recipe.

“We did that all the time, and those things didn’t dawn on me then, but I guess it was all a training ground,” he says.

It wasn’t until about five years into the business that he remembered that he and his brother also used to play restaurant.

“A lot of times, you don’t put two and two together,” he says, but neither do his peers.

So this is Michael. The Michael Dix behind Michael’s Frozen Custard.

A series of guided events led him and his former partner to purchase the original location on Monroe Street. Then, the building wasn’t just a fixer-upper; it was arguably a hot mess. But as they careened past it during a bike ride coming off the Arboretum, something in Dix lit up. He was driving forklifts then, and money was tight. He dreamed up the notion of opening a frozen-custard business, and visualized it happening in this much-neglected Monroe Street property.

Just three days later, his real estate agent pointed him to the very location he had daydreamed about.

He didn’t know a lick about the ins and outs of running such a business when he started out, but learned quickly.

“What I knew was how to make a great frozen custard,” Dix says.

Having missed the height of summer to carry them through the slower winter months, he says they practically begged customers to keep patronizing them or else they wouldn’t see the light of spring. Their fans were loyal.

“The next year, we had a great summer and the rest is history,” Dix says, and now heads four locations.

Having essentially been a one-man show since his partner’s passing in 1993 from AIDS, he has handled every last stitch of the business, from payroll to oversight.

“After he died I came pretty close to almost folding,” he said, noting that in his partner’s absence he had to teach himself how to run the financial end of the business.

“I’m like the guy who does everything,” Dix says, this year being the first year that he’s had a break from his seven-days-a-week schedule, sunup to sundown.

And he’s had several opportunities to take an out: for the last seven years he’s turned down offers to sell out, despite the reality that he could live an easy life not working another day. But it isn’t what he wants.

“I have this vision in the back of my head, I’m going to have this business until I’m 80. I’ll always have this,” he says.

He sources locally whenever possible (the burgers, for example, come from Ken’s Meat and Deli) and as the owner enjoys the perks of calling the shots on the stereo.

He loves dance music. A customer complained. He told him not to sit under the stereo.

He’s Michael. And there will be dance music.

“I believe in being who you are and being your extraordinary self,” Dix says. “I want to play. Life’s too short.”