“Why don’t you go outside and play with the other kids?” “He has that good hair!” “Why do you talk like a white person?” “Where are you from originally?”

From the time I was a little boy to today, I grew accustomed to people saying these things to me. Since I didn’t fit neatly into one box, people wanted to “figure me out.”  As a young Black boy who always knew he was gay, it was hard enough to figure myself out much less trying to live up to the expectations of those around me. So I learned to adjust my behavior and speech based on who I was around. I did it to cope; I did it to survive. The motivation was simple: I wanted to fit in. We now call this “code switching.”

When I was 12 years old my grandparents decided to send me to a private, majority-White prep school. As a six-foot tall, effeminate, bespectacled Black boy with a penchant for cardigans and neckties, I stood out even more. There was racism and rampant elitism. I got a taste on the very first day of seventh grade when a classmate said, “You live on the other side of the river? Did your house cost a dollar?” It was hurtful, because again, in spite of my keen sense of self and surroundings, I was being pigeonholed. I felt like my identity was being determined for me because who I was wasn’t good enough.

At first I worked hard to fit in, but thanks to coming out and having access to a support network of friends and family I began to step fully into myself. We had a large art studio where my drawing and painting abilities flourished; we had a very active theater department where I built my confidence in front of crowds and developed my sense of style; my love of the written word was nurtured while studying Chaucer and learning French; my interests were reflected in the steadfast friendships I made; and my ambition stoked through elective leadership roles within and outside of school. However, the code switching was so embedded that it morphed from a desire to assimilate to an effective way of keeping people out.

At its best, this heightened sense of awareness gave me empathy, sensitivity, and a charisma that attracted a lot of attention. At its worst, this chameleon-like ability allowed me to overpower my feelings, to build a fortress around my own vulnerabilities for fear that I’d somehow lose ground in the confidence boost of high school and college. I’d reclaimed my identity through sheer will and determination.

That confidence got me my first good job out of college. It made me bold in the pursuit of whatever I wanted, whether that was a job or romantic partner (of course I never wanted anything serious because that involved being vulnerable). It was still exhausting, and I’d become aloof from my own family. It had gotten out of control. I’d used the switch so much it had broken.

I decided to move to Madison in 2010 for a fresh start. To go someplace where I knew no one, where I had nothing to distract me from achieving more and feeding the monster I created. In fact, this “experiment” was only meant to last for five years, then it was on to a larger city. In truth I was trying to run away, but you can only do that for so long.

Sure, I was still bold and ambitious when I arrived in town, but it didn’t take long before I was placed neatly in a box. There aren’t many out, gay, thirty-something, professional Black men in Madison and navigating the fraught racial environment compelled me to retry the switch, but I’d left it broken. I could comfortably move through all sorts of spaces in town, but it didn’t feel the same. It felt like I couldn’t keep my eye on the ball anymore and it made me uncomfortable; I felt vulnerable. When, on a first date shortly after moving to town a guy said to me,, “I’d never get into a relationship with a Black man, but I’d have sex with him,” it cracked my confidence, because I was being commoditized.

I still pursued leadership roles because it’s something I always found fulfilling, but I started to question why I was invited into certain decision-making spaces. Was it because I was young, Black, gay, or some token combination thereof? Anxiety became a frequent problem before a close friend suggested I go to see someone. I had no qualms or embarrassment about going to a therapist, because I knew that I’d bartered my true self for the comfort of code switching.

It was in the world of human services where I saw the disparity for people of color in Madison. I heard directly from young people that they felt they didn’t matter. There was a young Black middle school boy who actually said, “White people don’t have mental illness, but Black people do because there’s something wrong with us.” I’ll never forget it.

It sounds cheesy, but that young man forced me to reflect and allow myself to feel the frustration and fatigue of a Black man who’d spent so much time compromising for the sake of false security and fitting in. True to form, I decided to live in a style that’s true and authentic, no matter where I am or with whom I’m interacting. That was three years ago and it still isn’t easy, but if you know me you know that my will is strong. It’s what I need for myself and my relationships; it’s what young, queer people of color need to see; and—if I have anything to do with it—it’s what a city like Madison should invest in.

Cedric Johnson is the Community Services Manager at Madison Gas & Electric, where he works specifically with communities of color and faith communities to ensure inclusive and fair access to services. 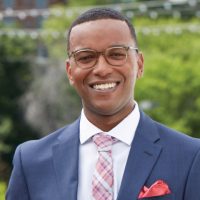