The Embodiment of Fitness 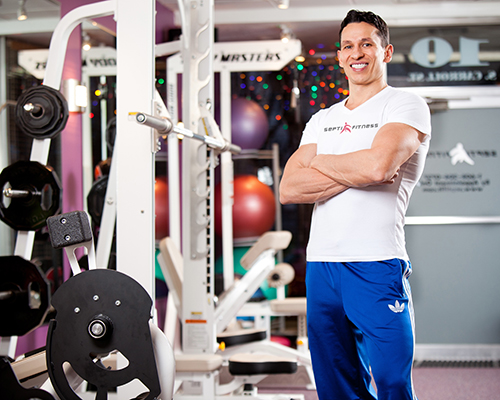 My passion for fitness and nutrition comes from my childhood in Bucharest, Romania, where I was born and raised. Life was harsh under the communist regime, and I realized that I had to be a survivor; that came in the form of athleticism, which was instrumental in shaping my identity and personality. My mother raised me on her own after my father died—in the line of duty as a police officer—in a car accident when I was two years old.

I came from a sports-oriented family. My mother grew up performing gymnastics and was an avid equestrian, my father was an accomplished soccer player, my brother a boxer and hockey player, and my sister a volleyball player and canoeist. I took up gymnastics, soccer, judo, and horseback riding, but the sport that I fell in love with was bodybuilding, which was fueled by my love and curiosity for Greek mythology; the illustrations I saw were of strong and beautiful athletes in ancient Greece. I dreamed of transforming my body to that of an ancient Greek god and so started learning about bodybuilding by reading Romanian and English magazines. Finding bodybuilding reading materials and a support network in Romania at the time was difficult because the communist party was a staunch non-supporter of bodybuilding. Determined, I used my own basic weights. I soon realized that my rudimentary equipment was not going to be enough; I needed to find a well-equipped gym, and so became a member of the club where my father trained as a police officer and where family members of police officers trained in a variety of sports with more advanced equipment.

Later, I found the best fitness facility available in Bucharest at the high school Spiru Haret, where the owner and coach, Szekely Ladislau, the author of two popular bodybuilding books, ran the gym with his wife Lenke. Their gym focused on recruiting competitive bodybuilders and Szekely and Lenke became my first mentors. At the school I passed the audition and started competing at the teen level, placing fourth at my first competition, third at my second competition, and first at my third. Those victories deepened my passion and commitment to bodybuilding and increased my thirst for more knowledge on the subject, a thirst that has never left me. My mentors taught me about the relationship between bodybuilding and nutrition, and I learned that without a solid, technical background in nutrition I would never achieve victories in training and bodybuilding.

The Necessity of Nourishment

I embraced bodybuilding wholeheartedly, as it helped me to discover myself and take care of my body, but the challenge of becoming a properly fed bodybuilder in a malnourished, communist nation stood in my way. Meat and produce in markets were a rarity, but necessary to provide protein for muscle building. Having been raised without a father figure, I moved forward undaunted, finding inspiration in Bruce Lee and several professional bodybuilders. I had other interests: the arts, music, and break dancing, which would later help me to win five “best posing routine” awards.

To follow my professional passions, I had to find a way to get out of communist Romania where my dreams would be left unrealized. I knew that to become successful as a bodybuilder and professional fitness trainer, I had to go to the best country in the world for the training and education of bodybuilders, the United States. I had a passion for things American not only because of bodybuilding but also due to my love for American movies, music, and the freedom of the culture. From the age of five, I watched American movies and imitated the sounds of spoken English, although what came out of my mouth wasn’t the English language. While watching the movies I rolled on the floor imitating the action and dialogue in nonsensical English while my mother laughed at me.

Subversive Work Behind the Iron Curtain

Before leaving Romania, I had one more challenge—to fulfill my mandatory duty to serve under the communist regime in 16 months of military duty. I then found a way to make money until I could leave Romania for America. My love for animals helped me to choose vet medicine as a temporary profession, a way out; a choice that surprised my military- and sports-oriented family. My mother was supportive and helped me find a veterinary school outside of Bucharest. I graduated with a veterinary technician diploma and landed a job at a farm, all the while training intensely to win bodybuilding titles. It’s a testament to fate, perhaps, that I’m here today—because I was very active at the time in working subversively to bring down the Iron Curtain by participating in street fighting and the building of barricades against the military’s tanks. The smell of tear gas and sound of the bullets whooshing past my head are sensory experiences that will stay with me for life. It was worth it. I fought the communists; I risked my life, but today am very proud of how I participated in the downfall of communism in eastern Europe, which brought the end of the dark era and new hope to my native Romania.

Later, I would train to become an acrobatic performer in the circus. It provided a steady income and allowed me to travel all over Europe and realize my passion for being an artist and athlete. Getting out of Romania was one step closer to America. The circus brought a palpable pleasure to my life; I felt at home onstage under the spotlight in front of a large audience, performing acrobatic feats. There was glamour in the costumes, music, and diversity of performances: aerial acts, illusions, juggling. And the presence of the animals allowed me to use my vet tech background to care for them.

Reflecting back, the circus taught me much and I was exposed for the first time to life in other countries. In the back of my mind, though, I still held tightly to my dream of being a fitness trainer and opening my own gym. We were busy performing three to four shows a day, so it was tough to find a gym to develop my bodybuilding physique and skills. Working out in so many gyms in as many cities allowed me to see an incredible variety of gym facilities, and it was during that time that I began to plan how I would one day build a first-rate fitness center of my own. We got an offer from our first American circus at the Circus World Museum in Baraboo, Wisconsin, and after a wonderful season performing there we said goodbye to each other as a troupe. I knew I had to start a new life in America, and leaving the circus was hard and I miss it today.

My next move to San Francisco helped me to understand myself at a deeper personal level and revealed to me my fear of being judged by my religion, culture, and the communist regime where it was hard to express personal feelings. I thought I was different from everyone else I knew. San Francisco was a difficult city to live in as it was so expensive and I felt insignificant, but I learned about myself and acquired a new personal freedom.

I began a search for education and training and found Madison Area Technical College, where I studied kinesiology and nutrition and became certified by the American Council on Exercise (ACE) and National Academy of Sports Medicine (NASM). I worked for two years at Heroes Health Fitness & Beyond, where I became friends with and was mentored by the owner, Rob West. By that time, I had been competing in natural bodybuilding championships for 11 years and had won several Midwest championship trophies, including overall winner in 2004. I still compete and plan to do so into my 60s.

My second job as a trainer was with Capitol Fitness, during which time I worked to realize my dream of opening a private fitness studio. Many challenges came up during my initial planning process, but I never stopped believing in the value of my project. Working as a fitness trainer was satisfying to me as I shared my knowledge and became a motivator for people who were trying to become healthier. My dreams moved closer.

In 2008, I opened Septi Fitness on Madison’s Capitol Square. My parents named me after a great man, the Roman emperor Septimius Severus, and I wanted to live up to his name. I have built my own little 1,200 square-foot empire in Madison and am now living my dreams of becoming an American and having my own successful business. I have a new life, have realized my professional passions, and am quite Americanized after 14 years of living here in my adopted land. I’m surrounded by friends and feel like my clients are family members. I landed with two suitcases and 20 dollars just 14 years ago and now can say I’m a living example of the American Dream. Since my first trip to Madison, this town has grown on me and I find it a special place to live and work and be a part of the community.

This will always be my home.