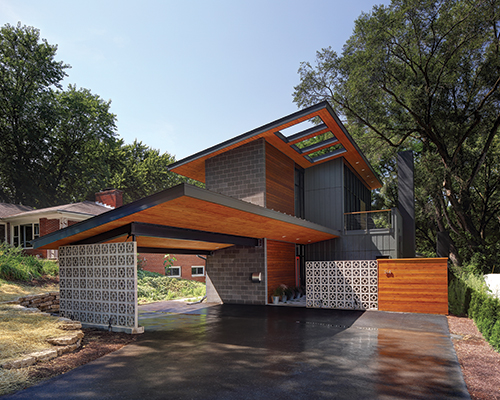 I was based in Wisconsin when, in 1988, I decided to split my time between New York’s Greenwich Village and my home state’s capital city, Madison. For my base in Wisconsin, I was looking for a loft space with urban style, not then the usual choice for those living in the Upper Midwest. I saw two properties that appealed to me: one was a mid-century modern ranch with a challenging interior space; the other was a smaller, single-story warehouse, located on the isthmus in Madison’s bohemian near east side. I chose the warehouse; renovating, adapting, and eventually adding an additional master suite and large deck on its roof.

One day in 2012, after long enjoying the sleek urbanity of the redesigned warehouse, I learned that the unchanged mid-century dwelling—the house I’d been so tempted by 25 years earlier—was again on the market. I was eager to show the building to my partner, Jason, and so we raced across Madison to take a look. Our first visit reminded me of the many challenges the property presented. An early owner used a wheelchair, and her spouse had retrofitted the electrical, plumbing, and kitchen areas for a person facing challenges of mobility and access. The house boasted an open plan, with wide, racetrack-like corridors connecting the perimeter rooms to the main living area. At the heart of the building, a small interior courtyard allowed outside access through large sliding-glass doors. My dream had been to renovate the entire space, enlarging the courtyard and opening up the semi-enclosed kitchen.

The challenge was irresistible: Jason and I soon sought an architect who could take our ideas for the house to the next level—literally. We wanted an upstairs that would perch (tree house–like) atop the existing structure, but we were puzzled about how to reach it. Luckily, we found award-winning architect Stephen Bruns of Bruns Architecture in nearby Baraboo, who took our ideas and combined them with his own impressive industrial prairie style to create the new 2,400-square foot mid-century oasis in the center of Madison.

Jason and my early connection to Bruns was serendipitous: During separate business trips, we each happened upon the same magazine article featuring the work of a local architect. When we returned home, we both unfolded the torn pages of the article that featured work by Stephen; we knew that he was the perfect choice for our project. When we met with him, Bruns asked us more about how we lived than about what we wanted in the renovation.

Together, we maintained the original footprint of the house, but raised ceiling heights in the main living spaces and added the 1,000-square-foot upstairs addition. Bruns studied sight lines, light, wind, and existing trees and vegetation—creating a concept that seamlessly envelopes the existing house, giving the owners the privacy of the upper master suite while separating the guest accommodations and office wing. The new design enlarges and repurposes the interior court, and reorients the main living area’s focal points to feature the new gourmet kitchen, expansive living and dining areas, and redesigned fireplace wall with built-in buffet and library shelves.

The list of required elements was modest, but the plan required every design decision to be orchestrated with care. With no basement, storage was key. Existing closets were incorporated into the initial plan, modifying door locations while creating new space for my extensive library. Kitchen storage was maximized by designing a floor-to-ceiling cabinet wall that also includes space for large, commercial refrigerator and freezer units along with double wall ovens. Both Jason and I are accomplished chefs. The kitchen was where we wanted to focus our pragmatic design aesthetic, making sure it was functional first, visually striking second—an important element since it takes up a major part of the main living area.

Proposing a unique solution to the request for a mid-century modernesque look, Bruns created an organic and natural progression from the existing house to the redesigned dwelling. Maintaining the footprint of the house, Bruns relocated the front entrance and created a dramatic stair hall. This addition also serves as the structure to support an expressive new roof line with cut-out skylights, which help create a series of private and semi-private courtyard areas—extending the living area and focusing the energy of the house away from the street and into its interior spaces.

Once the upper master bedroom and bathroom suite were positioned atop the front of the existing house, the roof line was established, and the stair hall addition imagined, the rest of the project fell into place. An expansive forecourt and carport extends the roof line. A captivating wood ceiling in the carport and exterior entry forecourt leads the eye through the cement block façade into the living area, visually uniting diverse areas and elements. A dramatic wood ceiling above the kitchen space is reflected in the espresso bamboo floor covering.

My long design career in the home fashion industry paired perfectly with Brun’s design aesthetic—we collaborated on the choice of materials, finishes, and colors. Our choices include exposed cedar-plank exterior details, revisited mid-century-modern decorative cement blocks, a rich charcoal steel roof, and polished cement blocks. These elements became the face of the exterior, while warmer materials and bold accent colors define each of the interior living areas.

The completed residence, situated in the midst of towering trees and set well back from the street, shines during the daytime and positively glows at night. Exterior lighting and the warmth of reflections emanating from openings and from within creates a magical atmosphere that captures what it means to be both mid-century and modern.

Together, Dino and Jason own SPAWOOF, Madison’s upscale dog daycare center, with its associated boarding and grooming salon. They are also the owners of WOOF’s bar. “Stewie” is their two-year-old champion whippet and proud occupant of their new modern residence in Madison.