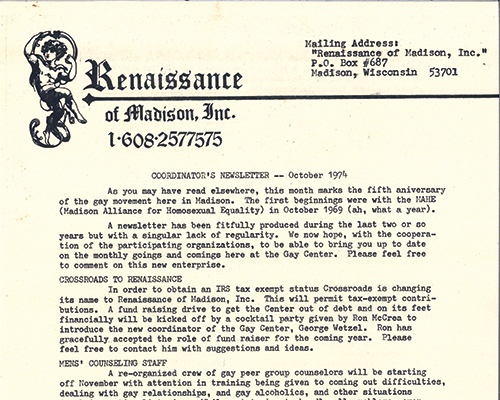 The early gay movement in the 1970s and  ’80s had to work hard to establish an organizational structure that could transform the chaos of early liberation impulses. Once you had an organization, you had to raise money.

In 1973 when the Paul Safransky employment dismissal case was being challenged at the Wisconsin Supreme Court, while the attorneys donated their time, there were filing fees and costs to print the required briefs. The Madison Gay Liberation Front passed the hat in gay bars to collect money. This showed a needed goal to have organizations with non-profit status to solicit and accept donations—but they would find the IRS was dubious.

In Milwaukee in 1975 the Gay People’s Union (GPU) recalled that four banks had turned down their request to establish an account. GPU also noted that they had to try for non-profit status from the IRS multiple times under the Nixon Administration. Activists there believed that, when they began the tax-exempt request in the early 1970s, there was only one gay tax-exempt group in the country: the Gay Community Services Center of Los Angeles.

When that California group got non-profit status they had to accept an IRS proviso that it would “not advocate homosexuality as a sexual orientation or lifestyle, and that none of your programs will ever be so conducted as to encourage or facilitate homosexual practices to a consequential degree.” Alyn Hess, a president of Milwaukee’s GPU, felt, “This attitude on the part of the IRS indicates that his group has been denied its application solely because it’s gay.”

In the mid 1970s under the Ford Administration, The Renaissance of Madison, Inc., which supported counseling at the Gay Center and published the Gay Renaissance newsletter, sought non-profit status. A surviving document shows what they were up against. In an April 7, 1976 letter the IRS posed a whole slew of questions in response to the Madison application. They sought out possible connections to other suspect gay groups like the Gayellow Pages and the Gay Activist’s Alliance. They also raised the question of whether there were any links among the principal officers of those organizations and Renaissance, insinuating a greater gay “conspiracy.” So much for freedom of association in the view of the IRS.

The letter was even more challenging. Since the application had said the purpose was to promote “a positive and integrative concept of and for gay people,” the letter asked “whether or not it is a basic tenet of your organization that in absence of valid evidence to the contrary, homosexuality is not a sickness, disturbance or other pathology?” Who knew they had psychiatrists working at the IRS? Or perhaps they did not, for the American Psychological Association had removed its diagnosis of homosexuality as a sickness in 1973.

Since the organization sponsored speakers, the IRS also wanted to know if any of the speakers held “the belief that homosexuality is not a sickness.” Following this up, the IRS wanted to know “If any of your speakers do hold that belief, do they present it before any of these audiences as their own belief or as a basic tenet of the organization?” I guess they were not big on freedom of speech, either.

The IRS was also interested in if “any social events [are] held following the regular or special meetings of your board members or after any lectures given.” Even our social events apparently raised suspicions.

The IRS asked Renaissance to respond to these and other questions, like listing contributors in the prior year, a request for a list of books in the organization’s library, who might be eligible for pensions, copies of brochures and newsletters, the qualifications of speakers sent out, and details on the phone referrals. The IRS gave 21 days for a response. In the end, Ron McCrea, one of the mainstays the group, recalls they abandoned the effort entirely.

A tireless pursuit, and eventual progress

In the mid 1980s, under the Reagan Administration, the Madison-based New Harvest Foundation sought non-profit status from the IRS. The organization had struggled with a name. Karla Dobinski, one of the early founding members of the group, came up with New Harvest because the group was trying to plant the seeds for a new generation of lesbian and gay activists.

An application was prepared for the IRS by a gay man, Ron Sommers, who had done this for other organizations and could insure that it was a complete document. While the application was granted, the IRS letter approving cautioned the group not to masquerade as an agricultural organization. Obviously, they did not know what Will Fellows had already uncovered on rural gays in his book, Farm Boys!

Today there are many LGBT non-profits but we have not gotten there without the struggles and visions of the pioneers.