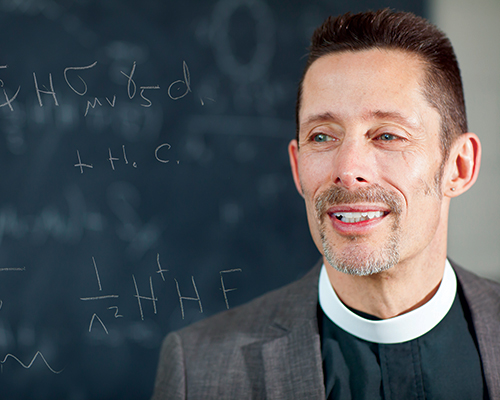 I am an openly gay man, a professor of physics at UW-Madison, and an ordained Episcopal priest. One might think that these identities are incompatible, but I integrate them every day. These identities represent my love for my husband of 16 years, my quest to unravel the mysteries of the cosmos, and my thirst for deeper union with the One who created both this universe and my place in it. None of these identities fit into the conventional boxes.

It’s natural to place people into boxes. It’s how we organize and make sense of the world. The problem is that boxes can become prisons that diminish rather than support people who don’t fit.

My journey as a gay physicist priest is about breaking boxes and challenging others to reach deeper levels of self-awareness. I want to shatter the lavender ceiling and encourage others struggling to integrate their sexual, spiritual, and scientific aspirations. Our LGBTQ+ youth should know that a career in science, math, or engineering is as viable as a career in the arts, entertainment, or humanities. All can love God. Openly. Successfully. In Wisconsin.

My father was an atheist political scientist and my mother was a lapsed Methodist musician. Being liberals, they sent me to the Unitarian church for religious exposure. I remember a young minister declaring that he only called on God when he needed a parking spot. It didn’t feel right to me, and I wanted to spend my Sundays with others who believed in God. Eventually, I found the Episcopal Church and fell in love with God through the sounds and visual beauty of the liturgy, and through the communion of the intellectually open-minded people I found there.

I may have been destined for the Church, but certainly not for science. On the first day of 8th grade science class we observed a candle burn for an hour. What could be duller? That attitude lasted until 11th grade, when I reluctantly enrolled in physics, where I fell in love again, this time with quantum theory and Einstein’s theory of special relativity. Physics was so mysterious, beautiful, and compelling.

Meanwhile, I already had a secret third love: the beauty of men. It was as powerful as the other two, but scarier by far. I feared it meant abandoning both God and physics. My parents suggested therapy. I tried dating women. I “acted straight” while channeling my frustrated gay identity into academic achievement.

By grad school, the tension between my three loves was roiling. I didn’t fit into any one of the boxes. During the Eucharist at Princeton’s Trinity Church, as I reflected on my experiences at a Catholic Worker soup kitchen and of poverty in Mexico, I experienced a vision of Jesus healing a broken and hurting world. Like St. Paul, scales fell from my eyes and the first box collapsed. I knew that God wanted me to be a priest.

After consultation with New Jersey’s bishop, I completed my master’s in physics and then began seminary. On the day I was supposed to leave physics behind, though, I couldn’t do it. It was as central to my DNA as was my love for God. I decided to complete my PhD and simultaneously enroll in divinity school to begin post-doc work at MIT.

It was through prayer that another box crumbled. I realized that God created and loved me as a gay man, budding physicist, and future priest. My identity was between God and me, not the boxes.

Twenty years later I am married to a wonderfully compelling man. I’m a UW-Madison professor of theoretical physics, a soon-to-be director of UMass/Amherst’s center for theoretical physics, an assisting priest at Madison’s St. Dunstan’s Church, and a part-time priest at Los Angeles’s All Saints Church. By the grace of God, I have followed my three loves.

In my journey, I have found that homophobia, heterosexism, and prejudice are alive and well in science, the church, and the gay community.

Over the course of my career—and most recently at UW-Madison—I have experienced that the physics community is not fully prepared for an openly gay man in a position of power. A significant reason why I shall lead a physics center in Massachusetts and not Wisconsin is the continued hostility I receive from my UW-Madison colleagues in theoretical high-energy physics and the silence from those who enable them. Hitting the lavender ceiling at this university has been painfully disappointing.

Yet, I have been sustained through my friendships with departmental colleagues and allies at other institutions. I am encouraged not only by the vision of colleagues and administrators at UMass who are not threatened by a box-breaking professor, but also by the American Physical Society, where I recently spoke at its first session on Gender and Sexual Diversity Issues in Physics.

The Episcopal Church is still on a journey toward full inclusivity. While we’ve made progress by authorizing the blessing of same-sex unions and consecrating two openly gay bishops, the Diocese of Milwaukee remains far behind the national church, the Diocese of Los Angeles (my “official” home), and my future home in Massachusetts. Still, I find hope in the prayerful advocacy of St. Dunstan’s parishioners, its rector Miranda Hassett, and other Wisconsin Episcopalians.

Do science and faith conflict, or are they separate but equal? For me, theoretical physics is a deeply spiritual discipline. The laws of nature that describe the universe’s visible matter are a work of art, yet so much of the cosmos remains mysteriously dark and energetic. Do a Christian faith and a gay identity conflict? Only a superficial understanding of Jesus could lead one to think so. Can a gay person “come out” as a scientist? If you skim mainstream gay media, one might not think so.

With my faith, a wonderful husband, supportive friends, mentors, and allies in the church, the world of physics, and my therapist’s office, I have integrated the seemingly conflicting aspects of my identity. If that can happen for me, then it can happen for anyone else in our community. We define the categories, not them.

It is, after all, about our lives.