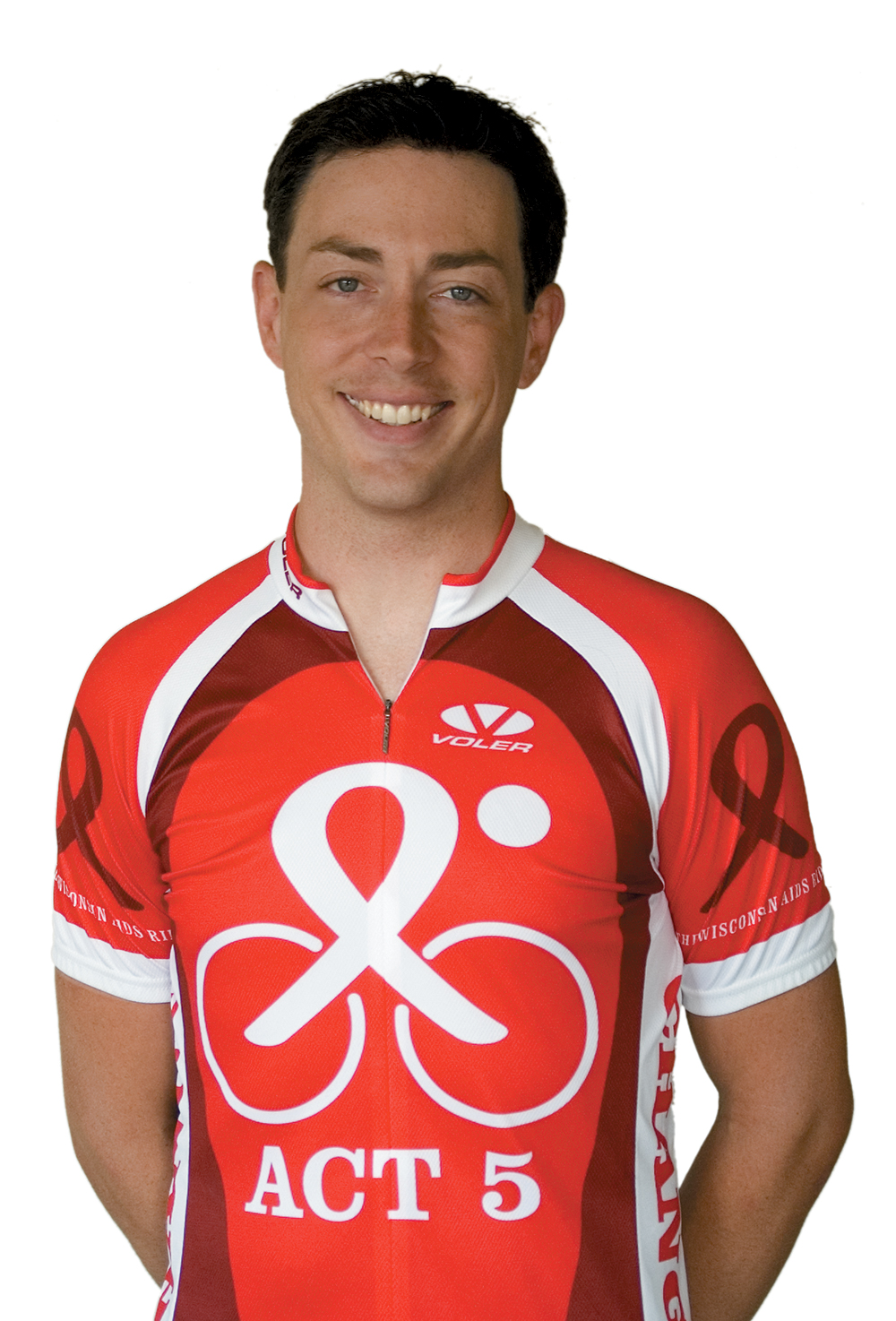 How did you first hear about the ACT rides?

Most people who get involved with the ACT rides do so because they know someone living with the disease. For me, that wasn’t the case.

I first heard about it in April of 2004. My friend’s fiancé was trying to get him to take part in ACT 2. He was making all kinds of excuses, so he suggested to her that maybe I’d be interested. When she approached me, I was curious to know more. At that time, I’d recently moved to Madison and was looking for ways to get involved. Della Hagen, who was part of the ride at the time, contacted me and was so excited that another television personality was considering getting involved. By that time, NBC 15 anchor Mike McKinney had been doing it for a couple years already. So, we setup a meeting between members of the ride committee, my boss, and me. At the lunch meeting the committee members were talking about what the ride stands for and what a life changing experience it is for so many riders and crew. My boss was excited. He leaned over to me and said this is something we should do.

After he said that, I signed up.

All I kept thinking about were the excuses. I don’t have a bicycle. I haven’t been on a bike in about 10 years. I don’t want to wear spandex. … Then, one of the members mentioned that even at the end of the six days you’ll wish you were still on your bike. I almost had a panic attack. I committed before really thinking it though.  It was already the middle of May. I only had two and a half months to buy a bike, train, and on top of that, raise the money needed to participate. Not to mention wear those spandex bicycling shorts. I was ready to quit before I ever gave it a chance. At that point, quitting wasn’t an option though. We agreed I would be doing this. Our promotions department was turning out promotional spots that I would be riding every single mile while producing stories to introduce our viewers to the ACT rides.  I was stuck. I had a new boss I was trying to impress and everyone knew I was going to be doing this. I had no choice. This whole time I was under the assumption it was one-day, maybe two days at the most. I never dreamed it was a six-day ride.

What was causing the excuses?

Truth be told, I was scared to associate myself with a HIV and AIDS organization. I became a reporter to tell stories of people who don’t have a voice. But, when you place an AIDS cause onto the shoulders of ‘television journalist’ the assumption becomes you are gay and you have AIDS. That scared me to death because I felt it would force me to come out faster than I was ready. I still wasn’t out yet. Coming out is a process that doesn’t just happen overnight—it takes time.  Because of being in the closet, something as simple as committing to the ride heightened my pressure to announce my sexuality to the world. I am gay, but I am not living with the disease. It sounds foolish now, but back then it increased my fear exponentially.

Was that fear necessary?

I was harder on myself than the reality was. It was scary, but through this I met incredible people who I learned would support me. They were non-judgmental, supportive and inspiring. They were people I wanted to surround myself with on and off the ride. They gave me the confidence I needed to be myself, which eventually crossed over from my personal life into my professional life.

Were there any surprises on your first ride?

What surprised me most was that everyone on the ride was not gay or male. The gay male was actually the minority. There were parents, siblings, and friends. They made up the majority. This ride actually reflected the world we live in, but not. The people on this ride as I learned did not care who you were, where you came from, who you loved, what you looked like, or what TV station you were on, they would stop on the side of the road and make sure you were okay. It did take a while to get use to that. People were always smiling at you, saying hi, asking how you were and really meaning it.

When did it become more than just a news story?

There were a couple moments, but the one that I will always remember was right after closing ceremonies my first year. I ran into Bob Bowers and Michael Costello. Bowers had been living with the disease for 21 years at that point and Costello’s son had passed away from it. They both gave me a hug and thanked me for giving a voice to a cause many have forgotten. Here are two different men who have forever been changed by the disease. I knew at that point I was changed, too.

The highs and lows I felt everyday on the ride became worth it. The highs included biking everyday in the heat and making it up every hill even when I thought I couldn’t go on. The lows included struggling up some of those hills and fighting with my management at the TV station. On the fourth day of my first ride, I wasn’t going to make it to my live remote for the 5:00 news. They were demanding I be driven in and I was trying to negotiate a later time. They threatened my job. I felt defeated until my friend and co-worker Elizabeth Hopkins talked me into compromise because at that point I was ready to quit my job. Her idea… get driven in for the live remote, then taken back so I could ride where I left off. It worked. I knew at that point something in me was changing. The ride, the people, and the cause were becoming part of my life.

After committing, how did you get started?

Finding a bike was priority number one. Like many new riders, the ride committee set me up with a mentor who held my hand through the entire training and fundraising. This is one of the reasons the ride is so successful. You are welcomed in from day one and they never forget about you.

Was the fundraising difficult?

I learned over the years you ask anybody and everybody. I started first with family, friends and co-workers. It is difficult to ask people for money, but when you tell them the cause behind their contribution, they surprise you. Fundraising was the part I was most concerned about and it ended up being the easiest. This last year the ride incorporated web-based fundraising and it is so easy. It doubled the amount I raised last year because you can donate securely online.

And now this year, how much did you end up raising?

It is actually still coming in, but as of right now, almost $5,400. This year, I sent out corporate sponsorships. That really helped quite a bit.

And where does the money go?

The money we raise on the ACT rides go to people in Southern Wisconsin living with HIV and AIDS. They are clients of AIDS Network who need help with transportation costs to get to medical appointments, paying their utility bills, phone bills and such. AIDS Network could not offer these services without donations.

You just finished your fouth ride. What keeps you coming back?

The people and the cause. The ride has become such a part of my life that I’m to the point of getting a tattoo of the ride’s ribbon rider logo. No matter where life takes me in the next year, I will be back for this. It’s the annual family reunion that you want to go to. You get to see your old friends and meet new ones on a journey that creates the moments that stay with you forever.