To Be the First 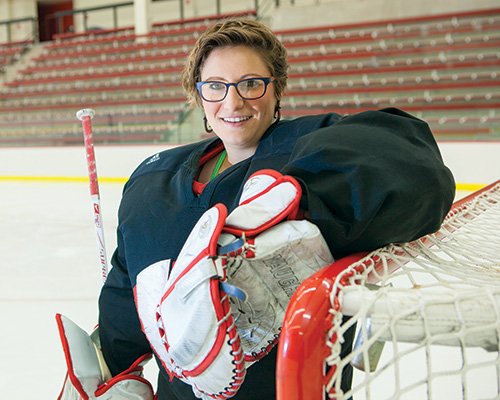 It was love at first skate. I remember hearing the crunch of the ice beneath my feet, the smell of a cold rink early on Saturday mornings. The beginning of my hockey career started long before the day my mother (finally) first allowed me, at age seven, to participate in one of the youth hockey programs. Pictures of me in our family albums at ages two, three, and four encapsulate the love and obsession with hockey I had from a young age: me standing, staring up at the game on TV, with a wide-eyed unbroken stare, and even my birthday cakes always depicted ice rinks and hockey games. I was hooked from an early age.

I grew up in Middleton, Wisconsin, on a cul-de-sac surrounded by kids my age. We all enjoyed playing outside together on our quiet street, but when it came to sports I was the only girl who consistently participated. Whether it was running football routes in our backyards, shooting hoops, or endless hours of roller hockey on the street, sports and physical activity defined my youth. Grass-stained clothing and scabbed knees were as natural as my ABCs. One was accepted and able to play with the Willow Trail group simply if their athletic ability was up to par. The fact that I was a girl who wanted to participate was quickly overshadowed by my competitive nature and athletic ability—you couldn’t really argue with me when I continually scored, right?

Hockey became a constant in my life. Although the season is during winter, I played year round to avoid getting “rusty.” Summers were spent devoted to training. I also always had a second family, one that I saw nearly every day at the rink, and with whom I have become extremely close. Although the members may have changed slightly from year to year, the commitment, discipline, and hard work on the ice and during workouts have bound us together in an inextricable way that has led to lifelong friendships.

In high school, I played on an all-girls traveling AAA club team, and, most poignantly, those were the girls I came out to first. We were always together, as we played over 80 games a season. As a young, gay athlete, I was not alone in the locker room in regard to sexuality variance. This realization overwhelmingly helped me to focus on hockey while I was at the rink instead of worrying about hiding who I truly was to the group of girls I cared about most. I could breathe free.

This immense relief resulted in an opportunity to play hockey in college at the Division I level. But the dynamics of my hockey career changed during my freshman year of college. That year I both formally came out as a member of the LGBT community and really embraced this community that I hold so dear. As a member of the UW Division I Ice Hockey Team, I spend almost all of my free time with my teammates, including team study hall, meals, team workouts, traveling on the weekends, and practices during the week. When I came out, I was worried this would negatively impact the acceptance my teammates felt toward me in the locker room, but thankfully I grew closer to them. This journey of self-realization and self-acceptance took many years, but ultimately it has strengthened these bonds of friendship and family I feel with my teammates.

Lately, we have all heard the incredible and courageous stories of pro athletes like Michael Sam, Jason Collins, and Megan Rapinoe. I realized many within the LGBT community at University of Wisconsin might also be struggling with self-acceptance or acceptance on their respective teams. Therefore, in the spring of 2013, I started a chapter of the You Can Play social activism campaign dedicated to eliminating homophobia within all sports. You Can Play brought me back to the days where kids simply played sports for fun. It was not about championships, scholarships, or sexuality. It was pure. As the group’s tagline says, if you can play, you can play. Regardless of level—professional, amateur, rec-league, or otherwise—I believe sports should be a place where work ethic, talent, and sportsmanship come together and are honored, and none of these attributes are dictated by one’s sexuality. Thankfully, this sentiment is heavily echoed within Wisconsin Athletics.

Sports, specifically hockey, have benefited me in so many far-reaching ways. Most important, though, the embarrassment or shame I could have felt by being different from my teammates because of my sexuality was overpowered by my confidence associated with my athletic prowess on the ice. I realized the reason teams are successful is not because every member fits a cookie-cutter mold. Each teammate brings priceless and different attributes to the table, all of which form championship-caliber teams. As any elite athlete knows, personality variance on a team is extremely important, and whether one teammate is black, white, gay, straight, short, or tall, it doesn’t matter so long as they buy into that team’s system to win games.

I believe we are at a major turning point for LGBT inclusion in sports. We have so many phenomenal and award-winning athletes coming out both as allies and as members of the LGBT community. This is so important for kids, much like a young Ilana, because it proves to them that athletic ability is what matters, not one’s sexuality. Sports locker rooms once were extremely hostile and homophobic environments. But it is important for all of us, regardless of competition level, to foster more inclusive, accepting environments today to make sure all kids, irrespective of sexuality and/or gender identity, are able to realize their full athletic potential.

hockey | Ilana Friedman | You Can Play