To Enclave or Not to Enclave 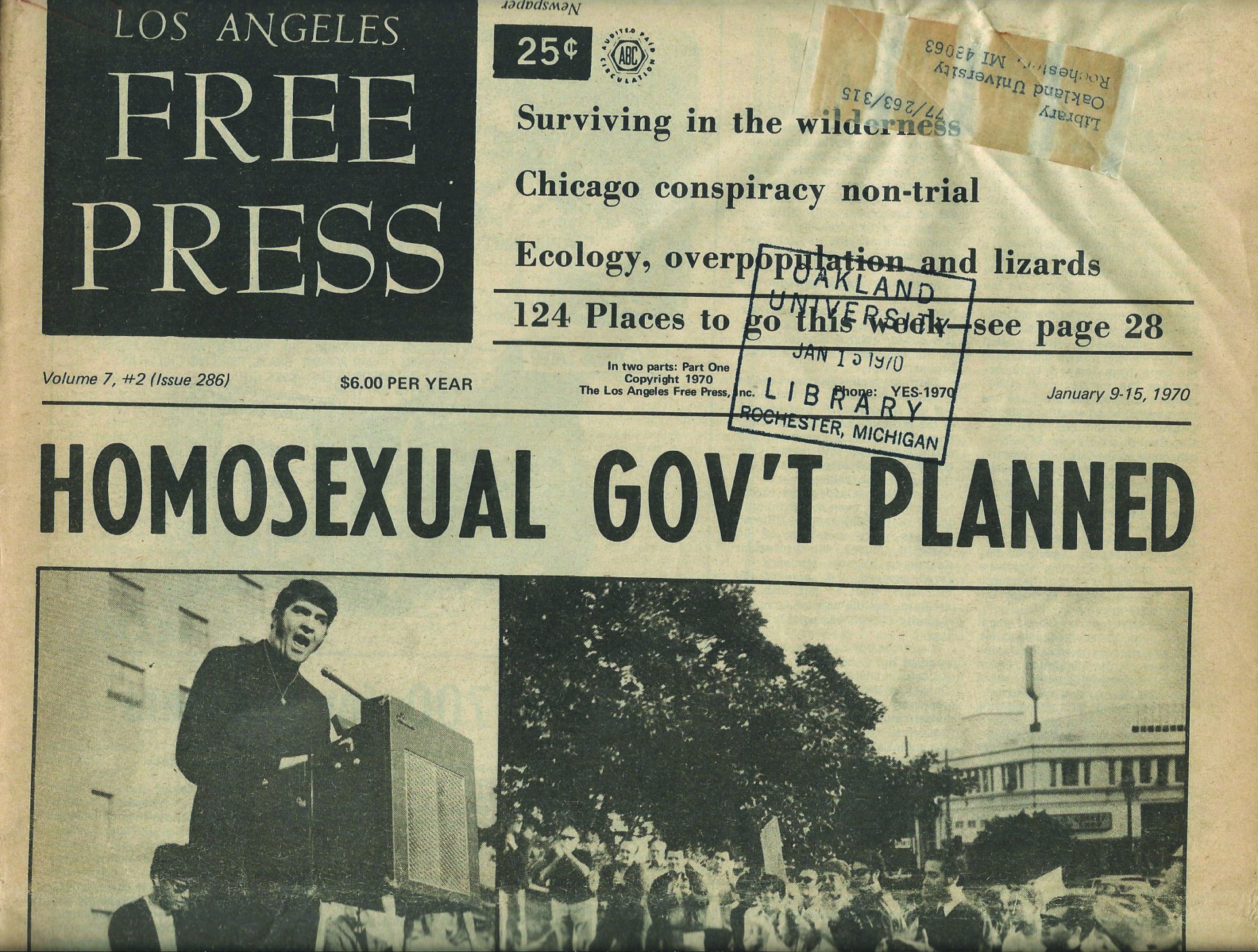 Wisconsin LGBTQ people have always faced a dilemma and a choice. The dilemma is how to deal with a homophobic society. In the pre-Stonewall days some people fled, like Glenway Wescott who went to Europe and settled in New York. He then penned a book of stories called Goodbye Wisconsin about the experience. Other gay men while exploring homosexuality in Europe would return to the state and build places or enclaves where they could lead their lives openly.

In the post-Stonewall era, while the main choice of the community was to throw themselves into liberating an oppressive society from its patriarchy and homophobia, the appeal of enclaves did not totally disappear. One of the post-Stonewall models floating in the 1960s counterculture was the hippie commune as an enclave of withdrawn space that also shared a back-to-the-land ethic.

Welcome to the Gay Alps?

So it is not surprising that the Wisconsin alternative press found the idea of a gay self-empowerment community attractive. Kaleidoscope in the fall of 1970 reported on an idea that had surfaced in California. They described it in a story titled “Gay Alps.” The Los Angeles Gay Liberation Front (GLF) under the leadership of Morris Knight and Don Jackson proposed that many gays should move to a sparsely populated county (450 people) named Alpine in the high Sierras south of Lake Tahoe. GLF claimed to have 1200 gay “pioneers” signed up for the trek to the gay refuge. The strategy was to move in enough gays to outvote the locals and establish a gay government.

Jackson believed, “Alpine can do more to end the oppression of homosexuals than the combined efforts of the homophile groups during the past 20 years.” For lesbians there was to be employment in law and construction that was denied them elsewhere. Jackson told the press, “All oppressed people would like to have a place of their own, where they can govern themselves and be policed by in-group members.”

Gov. Ronald Regan’s office was quoted, as there was nothing the state could do to prevent the gay migration and possible takeover. The Alpine County Sheriff speculated, “A few of these critters will be found in the river sewed up in flour sacks.” An Alpine judge thought issuing Queer Hunting Licenses was a fine idea. Rumors of vigilantes abounded. Christian activists also threatened to move in “missionaries” to counter the gay migration.

The Berkeley GLF condemned the Alpine idea as “separatist,” but other GLF groups in New York and Florida were reported as supportive. By 1971 the Alpine County project was abandoned, though there was some idle talk of seeking a place with a warmer climate.

Nevertheless, the Alpine idea had an attraction for at least one Wisconsinite. Wally Jordan was from Rhinelander where he claimed an extensive homosexual network in the 1930s. During World War II he had gathered stories of oppression from other gay service people and hoped after the war to organize gays to obtain their rights.

Jordan was something of a dreamer, able to spin out schemes in his mind but less solid in their execution. After the war he settled in Milwaukee and was involved with a flying saucer group, the Inter-Continental Aerial Research Foundation. By 1970 he was proposing to move “back up north, and settle in the least populous county in the state, hoping to eventually set up a more sensible ‘operation Alpine’ there.” His target was Florence County with a 1970 population of 3,298, the smallest county in the state with the exception of Menominee County, which was Native American tribal land.

Jordan envisioned a Freedom Corporation to purchase land. “Of course, the actual location of this citadel would have to be kept secret until everything is in readiness to move.” He feared the locals would blow up the bridges if they knew they were coming. A migration of 5,000 gay people was his vision. He also considered they should include some bisexual people, “to keep the project from dying out like the Shakers did,” who had practiced celibacy. Gays were to be trained in woodworking to use the plentiful local timber. Florence County need not have worried even if they had but known. No gay separatist migration in Wisconsin ever occurred.

Another Wisconsin enclave strategy, however, evolved from the attacks on patriarchy. There were elements of lesbian separatism in the Wisconsin women’s community. These were especially prominent in Milwaukee and La Crosse. These would be supportive of a successful enclave that lasted decades. The pages of the feminist magazine Amazon published in Milwaukee showed special affection for D.O.E. Farm, or Daughters of the Earth Farm near Norwalk. The Wisconsin Womyn’s Land Cooperative owned the farm. In 1980 Norwalk was a small place of 517 in Monroe County. The 80 rural acres, purchased in April 1977, was called “some of the prettiest land east of the Mississippi,” in the unglaciated Driftless area of the state.

To use the land one had to be a Co-op member, initially costing annually $2 per $1,000 of gross income. Purposes included conserving the land and developing alternative skills. One assertion was that “patriarchal culture is a death culture, unconsciously (or consciously) raping, polluting, and slowly killing the earth….” In 1980 there were 250 members. There were fees for camping and classes as there was a mortgage to pay off. Goats were raised for milk and vegetables grown and trails built. The magazine also noted a similar experiment in Arkansas.

Being an all-womyn environment, D.O.E. Farm permitted the rebuilding of feminist culture “with a minimum amount of contamination/interference from the straight patriarchal value system.” The rule was, “there would be no intrusions by men, for none were welcome on the land.” D.O.E. Farm could also provide a resource to isolated rural women without battered woman shelters or lesbian centers as they had in some cities. It might be space to recover from burnout or a place to heal. A July 1980 story featured one woman’s experience. When she and friends woke in their trailer to the sound of a hundred chickens, they laughed because in the dark they had chosen the spot to park five feet from the henhouse. The friends enjoyed the communal fire ring and looked forward to the solar showers that were being built.

D.O.E. Farm was also featured in Leaping La Crosse News, the lesbian separatist newsletter of Western Wisconsin. The Wisconsin Womyn’s Land Coop was reported as place where one could be without being hassled by men. It was mainly described as primitive, yet there was a sauna and dance floor in the barn. The newsletter debunked the stereotype that the hosts were “a bunch of dogmatic, sprout-eating, spiritually and politically correct, man-hating separatists,” but instead were wonderful women. It positively identified it as “a growing, evolving example of Lesbian womyn engaging in a cooperative effort.”

Enclave strategies might have attractions for some in Wisconsin, but most of the state’s LGBTQ community believed in engagement and claiming their rights in the civic life of the state. The path of that engagement would result in remarkable political victories as shown in the first gay rights law in the nation and a string of out elected officials including the only state with three out members of Congress.