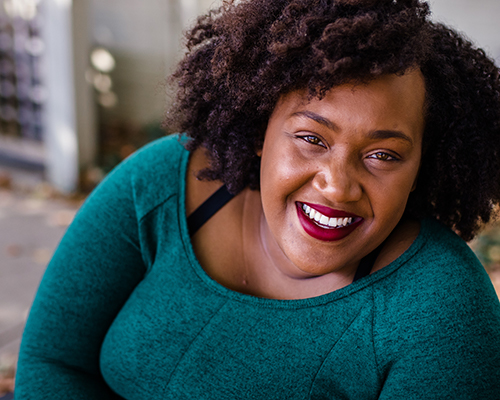 As a local videographer I film a lot of events around Madison. Lately, clients have been asking for interviews at their events. They want testimonials to put into words the impact of the space they’ve created. I love doing it and, everytime, I have to remember that people are really uncomfortable in front of the camera. As a person who has been on stage since the age of seven, and at 24 have found myself building a career both in front of and behind the camera, I can’t relate.

I started making YouTube videos at a time of great uproar in this country. While I don’t remember who or what exactly was the catalyst, there were many protests, many online arguments, and a lot of tension. I needed a place to speak truth to power, if you will. I changed my pace when I was attacked online by a Neo-Nazi (seriously, one of her most popular videos was her singing Happy Birthday to Hitler). This kind of action is par for the course on YouTube, though. The attack on content created by black folks, queer folks, feminists, etc., is a frequent occurrence.

This caused a shift in my content and especially because I needed relief and a moment to explore a passion of mine: comedy. I grew up in the golden age of Black Comedy. My family gathered around The Fresh Prince of Bel-Air, Family Matters, Sister-Sister, That’s So Raven, and more, for a decade of comedic gold. Seeing myself on screen inspired me and made me not even think twice about preparing myself for a life in show business. I studied acting until I was 18 years old and promptly changed my path. I stopped seeing myself in the same way—or I’d see myself in the same role regurgitated and recreated and I was afraid of entering a career of tropes—so I didn’t.

Fast forward to the Emmy’s in 2017. Lena Waithe becomes the first Black woman to receive the Emmy for best writing in a comedy and then all of a sudden, I knew exactly in whose footsteps I am following.

I want to reiterate the importance of Lena Waithe for a moment. Lena was the first black woman to win this award, and she did it by writing about her real experience as a black, queer woman. That’s nothing short of iconic. Often in the race for representation, queer people are last. In a “you can get yours, after we get ours” kind of way. In a “straight couples are consumable by ‘mainstream’ audiences but queer couples are too much too soon” kind of way. Lena made history as a black woman because her story of blackness and queerness—and how we sit in the middle of those identities—resonated so widely. Our stories are relatable because we are human. Our stories are worthy because they exist, and there is no pecking order for whose story gets to be told or when.

Sometimes, when I try to emphasize the importance of this moment to others, I get really emotional. I have spent years telling myself what careers I can’t have because there is no space for me and because the world of entertainment was not made for a black, queer woman who is just trying to survive and make my people smile and feel joy.

In creating my YouTube channel and my production company, I found my space because I created it. I created “Unapologetically Bria Bea” because I truly apologized for my voice, laugh, the space I take up, and the accent that slips out here and there, for far too long. When I started my channel, I calculated how consumable I could be; how nice I could talk about serious issues, how I could make sure no one was overwhelmed by my blackness or queerness. Those days are gone. I embrace my identities unapologetically because I deserve to do so.

One week I was frantically recording a first-person comedy video and editing a client video and losing sleep and I really had to stop and ask myself what the point of all of this was? I could drop the acting thing and become a Director of Photography/Cinematographer or Director and work solely behind the scenes. But I also have this passion and drive to use my voice and have spent my life training to do so.

So why both? I see Franchesca Ramsey, Lena Waithe, Lilly Singh, and so many other powerful women of color creating in front of and behind the camera, and I realize that that’s the way for me. I can’t just let other people write my stories, I can’t just let other people direct my stories. I’m working toward developing something that allows the stories of queer folks, women, non-binary folks, folks of color, disabled folks, and everyone else who has been left out—to be told. On our own terms.

People often talk about “passing the mic” to women, people of color, and so on. The thing is, we have our own mics. We are talking, we are telling stories. We have been since the beginning of time. Think about it this way: Our histories are systemically erased, re-written, and forgotten by a standardized curriculum, and yet we still know or can gain access to that history.

This is the powerful storytelling that has sustained us. You all just have to decide to listen.

Together We Will Rise