I think it’s fair to assume that every performer receives mixed reviews from critics, audience members, and their peers from time to time. That applies very much to me—after all, there’s a reason they call me the “Unbookable” Baby Bear.

The name Baby Bear originates from one drunken night at the (now defunct) Inferno with my friends and fellow performers Kitty La Rue and Moxie Rhodes, producers of Peach Pies Caburlesque. Emilay Ulayta deemed me “unbookable” once I started to transition from being a “traditional” burlesque performer to a drag entertainer.

I am Madison’s hairy drag queen, wearing a jockstrap, bra, and three ratty wigs. My acts range pretty widely in content. I generally try to keep the tone humorous, but if I can subvert any preexisting notions as well, that’s even better. Besides, sometimes questions like, “Can someone look pretty while eating dog food?” can only be answered with the aid of a little comedy.

Thanks to being part of such a supportive group like Peach Pies Caburlesque, I haven’t met the same challenges drag queens and burlesque performers traditionally contend with. In fact, I’d say my biggest challenge in the beginning was gaining acceptance from the gay and drag community. I wasn’t trying to be pretty. I didn’t want to lip sync to Top 10 radio hits while prancing around on stage for dollar bills. That’s the scene here in Madison, and that made it difficult for me to find drag bookings.

I did have a small niche carved out from performing burlesque, though, and that helped. Dave Eick, owner of Five Nightclub, was kind enough to humor me and book me for drag shows at his club. He also gave me the opportunity to host the former open stage night at the club, which is now Baby Bear’s Battle Royale. Held the last Thursday of every month at Five, it began when Dave asked me to take over the Open Stage event where primarily drag queens would attend and perform for tips and drink tickets. When I took it over, I worked with Dave on creating an incentive, or reward, for those who come out to perform. What we have now is an open, monthly competition that has brought in drag, burlesque, and pole artists. They all perform one to two numbers. At the end of the show the audience chooses three to perform on stage at once to a song randomly chosen by me or whomever is running sound. Those three are then ranked by the audience, with first and second place both receiving a paid booking to the following month’s Battle Royale. The third place prize is a gift certificate for FIVE.

It’s been a great opportunity to grow as an emcee and producer. We’ve had queens from Milwaukee, such as Omēga and Aubrey Del Mar, and dancers from Miss Pole come down to perform. Mercury Stardust and Cynthia Mooseknuckle are regular performers who have won the headliner position twice. I believe Regina Taylor got her start at Battle Royale as well, and is now doing gigs in Milwaukee and competing in drag pageants. It’s wonderful because it really is an “anything goes” sort of show. You can come in with a completely polished act ready to rock the house or use it as a space to experiment with a few new ideas.

The more I started exposing others in the gay community to a style of drag they were unfamiliar or uncomfortable with, the more they started to appreciate it—or, at the very least, humor me. 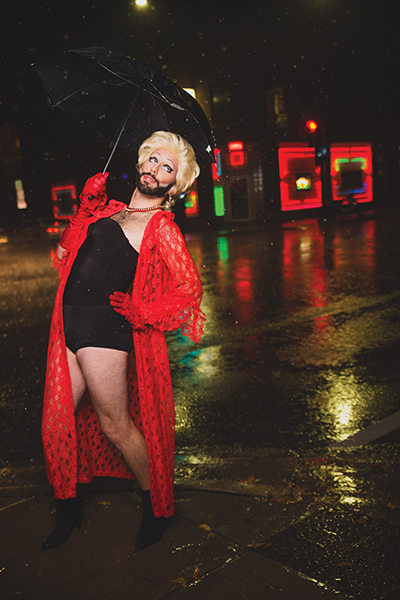 The reason I perform is to bring out emotions in others and in myself. Whether I make audiences laugh, gross them out, turn them on, or more favorably turn them off, I want a reaction. Looking “good” is rarely the focal point of my act. I enjoy using my body and onstage antics to mock sexuality. I try to sprinkle “sexy” into performances in a way that may be jarring or off-putting.

My act has also been an excuse to act out in the past during difficult times in my personal life. As Baby Bear I can do whatever, wherever, with complete disregard for anyone, and allow my personal turmoil to manifest itself as a mess on and off the stage. Again, “unbookable.” Baby Bear has been an escape for me, and I try to give my audience that same gift. The chance to escape into a world of fantasy, even if just for a moment, is something that we all need and can benefit from. That’s what I’ve always sought to gain from my entertainment choices.

I’m not sure what my exact trajectory for the future will be. Hell, I’m not completely sure what my current trajectory is. I have had some moments where I’ve felt pretty close to whatever indefinable goals I’ve set for myself. One such moment was a distraught audience member demanding their money back because I had gotten chocolate pudding on their pants. Another example would be hosting the first ever Wisconsin Burlesque Festival, produced by the Wisconsin Burlesque Association.

Life is chaotic and jam-packed with abrupt path changes, but as long as I continue to have moments like those, and I’m surrounded with loving and supportive friends, I’ll feel like I’m succeeding.

Jake thanks Anthony Marx for his help in writing this piece.