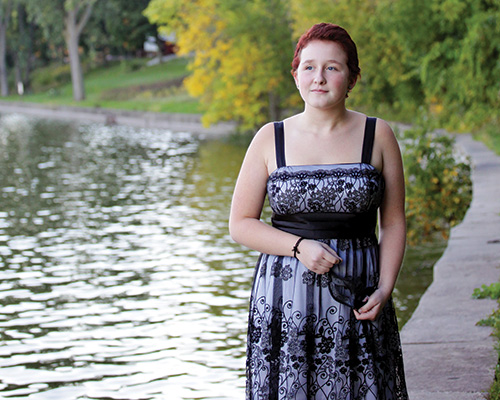 Not because I wanted to, but because it was safer for me. I grew up with my dad and stepmother who both believed in a religion that frowned heavily on homosexuality. I never saw that as a problem—until the day I realized I was a lesbian.

The day I woke up was when I saw my best friend playing on a swing set. I watched the way she moved, the way she laughed and smiled. I was scared—terrified even. I told her that I thought I was bisexual and cried with her for a bit.

I came out to my mother first. I waited until she was drunk at a party and told her I was bisexual. At first, she was hurt that I waited until she “had forgetful juice” in her, but then she said that she was proud of me. I had hoped that with the alcohol she would forget the fact that I came out to her, but much to my dismay she didn’t. We had a talk the next morning, and she said that she was proud of me no matter what and exclaimed that she loved her “bisexual” daughter!

My father, however, was not as accepting. I told my stepmother first, just for the relief of telling someone else about my journey. She frowned down on me and drowned me with the “just a phase” speech. Then, for some reason unknown to me, she told my father. Dad waited until we were both in the kitchen eating ice cream to confront me on the matter. We had an honest talk about who I was becoming and about the fact that I had been getting targeted at my current school and so was switching to a new one.

I also found an LGBT group to join in Harmony Café of Appleton. It was my place to escape from everyone and everything wrong in my life and find something bright and beautiful. It wasn’t long until an opportunity to become something inspiring showed up: the position of youth health promoter. I didn’t originally plan to interview for it, but my mother and the leader of the group urged me forward. With this position I have been able to reach out to my peers and show them the brighter side of their struggles. I have been able to learn and explore myself and open up to everyone around me.

But I didn’t open up to myself. I was honestly miserable. I was still getting messages from my old school, I found myself lying to my own mother, and I was hurting even more. I was hurting on the inside, and I didn’t know how to express it on the outside. I started cutting myself in January. I felt my mother would be better off without me. Finally, I just cracked.

It was mid-February, and I was in the hospital, the psych ward. For seven days I was surrounded by people that knew all of my darkest secrets but didn’t even know my last name. I was trapped looking out of a window, behind a mask, dreaming of flying. I still remember all the tear-stained faces that roamed the halls, each of them like ghosts searching for a way out. We all had something in common, and yet we were all so different.

Today I live with more confidence than ever. Today I stand up proudly and say I am a lesbian! Today I write this with hopes of sharing my story with you. I am healthy and happy. I no longer have horrible sick thoughts or twisted dreams. I have a family that loves me through hell and high water. Today, I am no longer the girl behind the mask.