Victories and the Work Ahead 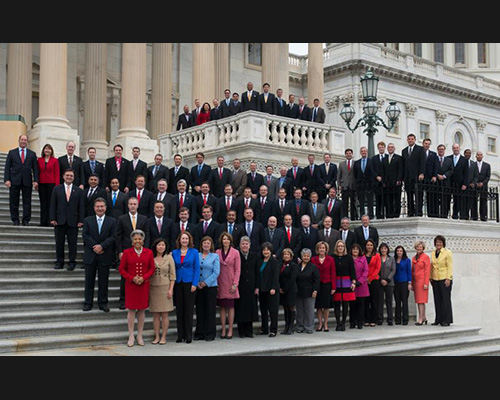 As I come to the close of my first term in Congress, I want to share with you my reflections on the past two years. Before I begin a trip down memory lane, however, I want to say thank you for sending me to Congress. Thank you for letting me have a seat at the table where decisions are made to represent not just south central Wisconsin, but the LGBT community at large.

People often ask what it’s like to serve in Congress—currently the most dysfunctional Congress in modern history. The legislative process is largely broken thanks to the Tea Party wing of the Republican Party. The Tea Party tail is wagging the GOP leadership dog, and little is getting done on the legislative side. But being there allows me to have other impacts.

I remember just one year ago on the afternoon of June 26 when the Supreme Court’s DOMA decision was announced, the co-chairs of the congressional Equality Caucus had a telephone call with President Obama about the law. He promised us swift Federal action for implementing the decision, and that he did. In almost every area of government, swift implementation and strong progress have occurred. In addition, at the request of the Equality Caucus, while Congress stalled, the President moved forward and signed an Employee Non-Discrimination requirement for federal contractors.

We’ve also made progress on transgender rights, including the Senate passing a trans-inclusive ENDA bill to the Social Security Administration, updating policy to allow individuals to change their gender designation to their most recent medically necessary reassignment surgery covered by Medicare.

While the equality front is moving forward here in the US, internationally we are in a darker period. According to the Harvey Milk Foundation, 1 in 6 people that previously had rights across the globe lost them in the last year. From Russia to Brunei and parts of Asia to Uganda, Nigeria and other African nations, too many can be killed or imprisoned for who they love. In Brunei, a newly adopted penal code has legalized violence against its citizens, especially LGBT individuals and women. I was proud to lead a letter with 118 of my colleagues calling on the United States to halt trade negotiations with Brunei until the country addressed its human rights violations. The US must continue to be an active leader for global LGBT equality.

Back here at home, all of the progress towards LGBT equality is because people like you, across the country, got active. We stood up, talked out, organized, and helped elect our own and our allies to office. So thank you for all you have done to advance meaningful pro-equality initiatives across the country.

Let me end by sharing this story—something that drives me every single day I’m in Washington. The day after Senator Tammy Baldwin and I were elected two years ago, a local reporter went to a Gay/Straight Alliance group in one of our local high schools. They interviewed some of the youth. One student talked about the importance of our elections:

Until no one questions that we all matter and amount to something, we have work to do. That’s what’s left for us to finish.