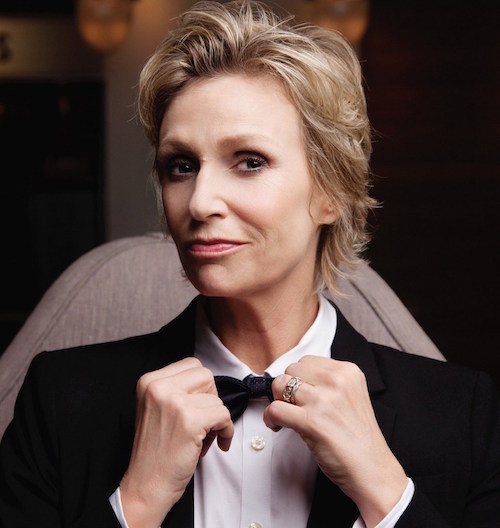 Actress Jane Lynch has been on a tear lately, well-known for her role as the acerbic cheerleading coach Sue Sylvester in the hit television show Glee, and currently the host of Hollywood Game Night. Lynch, a Midwesterner, spent 15 years of her early career in Chicago acting in the Steppenwolf Theatre Company, and The Second City. Her stage work led her to film work and led audiences to hilarious characters from the Christopher Guest movies Best In Show to A Mighty Wind, The 40-Year-Old Virgin, and Talladega Nights: The Ballad of Ricky Bobby to name a few. However, it was her role as Julia Child’s sister in Julie and Julia that triggered Entertainment Weekly to dedicate an article to the possibility of recognizing Jane Lynch with an Academy Award nomination. She made her Broadway debut as Miss Hannigan in the revival of Annie in 2013.

Lynch has served as host of VH1’s DoSomething Awards, which celebrated and encouraged young people to become active citizens and leaders while also making community involvement fun. Lynch has sponsored animal adoption events in California. She received an Honorary Doctorate in Fine Arts in 2012 from Smith College.

Her next role will be as the Honorary Chair of the AIDS Resource Center of Wisconsin (ARCW) 2017 Wisconsin AIDS Walk, October 7 in Milwaukee. In advance of the event, Our Lives had the pleasure of chatting with Lynch about why she got involved in the walk and the HIV/AIDS awareness cause generally, whether or not people are truly nicer in the Midwest than on the coasts, and how to stay motivated in the age of Trump.

What can you tell us about your motivation in getting involved with the Wisconsin AIDS Walk?

I’ve been involved with the LA Gay & Lesbian Center here–I was on the board, I’ve done the AIDS Walk and the AIDS Ride over the years. I’ve been to many closing ceremonies and I know that this disease is still killing people and we forget about it since it’s not in the forefront anymore. We still have to help our brothers and sisters who are inflicted with this disease. And that’s what I’m doing. They invited me to come and I thought, how great! And you know I’m from Chicago so I’m a stone’s throw from Milwaukee. So I was very honored to be asked and I’m looking forward to October 7.

You are from the Chicago area; do you feel a connection to the Midwest in raising awareness for this fight?

I know that the Gay and Lesbian Center in Chicago is awesome, and I know that because the LA  Gay & Lesbian Center really helped them create it and bring it up-to-date. And I heard about them over in Milwaukee and I know they are a premiere organization as well.  So it made me very happy to be part of this. Being from the area, I don’t know, I think I’d do it anywhere, the disease doesn’t care where you’re from, but I was really happy to be asked and happy to accept.

So are Midwesterners really nicer than people on the coast?

(Laughs) Let me tell you about the psychological phenomena: We tend to be nicer, but we hold a lot of dark stuff inside. But what I love about New York is that it all just comes out. It may hurt, be jarring, because we’re so used to being polite. What I love, and I know this about Chicago and I would assume it’s the same in Milwaukee, that we are a big city with Midwestern feeling about us, and a Midwestern vibe. There is just such friendliness in Chicago and outward goodwill that you don’t necessarily feel at 50th and Broadway in New York.

Several years ago you wrote a book called Happy Accidents, and you were pretty honest about your own struggles when you were younger. In it you encourage younger, anxious people not to worry so much. If you were that age now, in the age of Trump, what would you tell your younger self?

(Laughs) Hang in there and do not pay so much attention to what is going on in Washington except the stuff that we need to resist against. Try not to internalize it as a personal thing, and I know that’s hard for kids,  and that’s why I’m so in love with Dan Savage and the “It Gets Better” campaign. As much as there’s all this ridiculousness in Washington along with the attempt, yet again, to take away our health care, we need to stay very local with ourselves and our feelings and with each other and continue to love each other and support each other and send people to Dan Savage’s website and watch those videos telling you that it can be a better option.

Can I just say too that I just taped a “Will & Grace” episode last night, and it’s about this very thing. It’s about a kid and how he’s feeling today as a young gay person who’s obviously going to be coming out soon.  It’s their 200th episode and obviously I can’t give away anything more about it except “Will & Grace” are back and it’s funnier than it’s ever been and it was pretty fucking funny, excuse my French. Everybody is fantastic and at the top of their game and they all look great and the writing is fantastic and it’s just in time.

Lesbians were always involved in the early days of the AIDS crisis, especially taking care of the victims when often no one else would. Do you feel, as a lesbian, that you are continuing this tradition of being on the front in the fight of this disease?

Yeah, I want to give love and gratitude and kudos to those lesbians, those women, back in the late ’70s and early ’80s when this disease came upon us and how scary it was and we had no idea what was going on. And the lesbians stepped up. It’s in the feminine nature, and I would go so far as that we are all a conglomeration of feminine and masculine and there were many men who did [the work] as well, but the lesbians did.

You know the men were kind of squashing them in the gay movement, they weren’t giving them positions of power in the centers with the men stepping up and going, “We’ll take care of this, ladies.” But the ladies stepped up. I’m so glad you brought it up. Because the men were so grateful to them and saw partners in the women, not just somebody to push aside and take control saying this was men’s work. They saw actual partners who have so much to offer. And I know that this is not the only reason I do this.

I saw Tyler Ferguson and Sean Hayes at the [Will & Grace]taping last night. It was a very important night and a lot of the Hollywood gays came out to watch it, and these are guys who are out there still advocating for rights and for respect and love for everybody on the planet. So it’s not just women but the women certainly have stepped up. Case in point, and they’re not lesbians but they’re women: the senators who are working so hard on this recent debacle, healthcare reform, which they are trying to force on us. So it’s the women, you know, and they have a lot of old school asshole men in Congress and the Republican Party and these women are a shining light. They might be the heroes of this craziness.

So, this is not a question, just a suggestion: The goal of a celebrity at an AIDS Walk is to get as much PR as possible. Would you consider, just to boost people talking about the event, doing the whole walk as your Sue Sylvester character (from Glee)?

NEVER! NEVER! (big laugh) Although if I thought it would cure AIDS, I would. I just did an event where they paid me a lot of money to be Sue Sylvester for a couple of hours and afterwards I couldn’t get the suit off quickly enough and I vowed never to do it again. We’ve put Sue to rest.

Okay, last question. And this is for all the fashion queens out there. You are doing a walk. What kind of shoes will you wear?

I haven’t thought about that, but I have a pair of New Balance and I hope they are good enough. Yeah, New Balance are great. I’ll wear those.