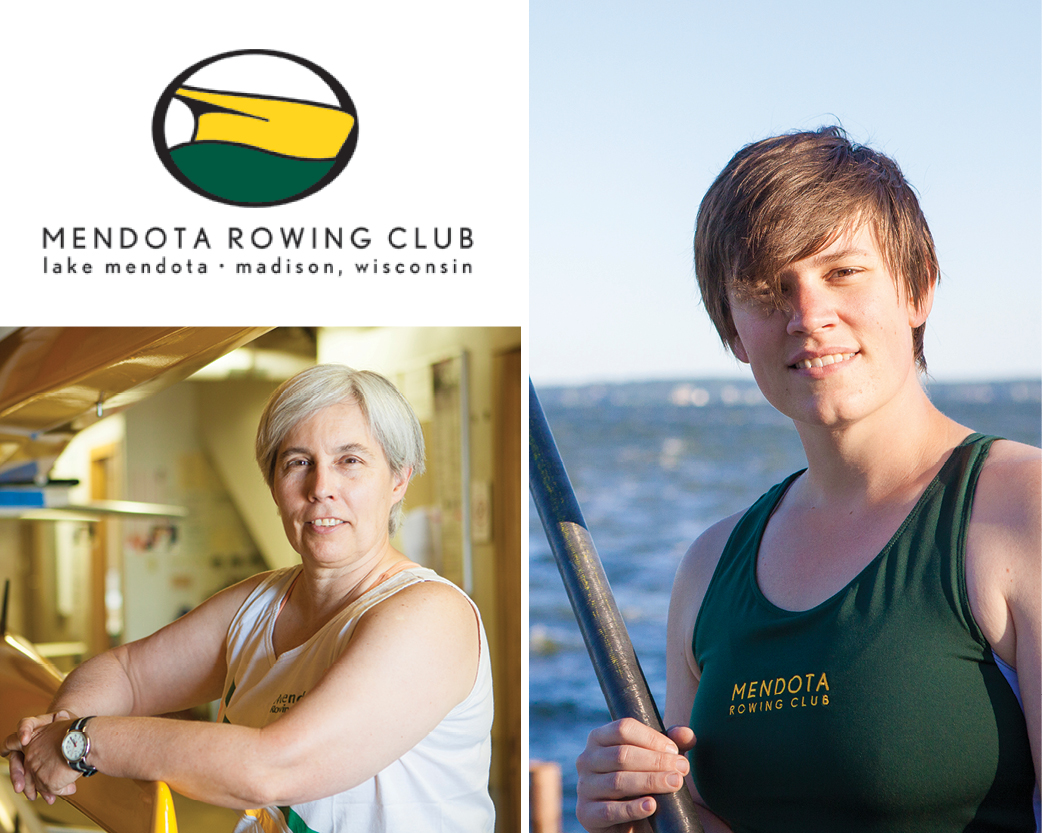 Chances are you’ve caught a glimpse of the low-slung, long, narrow boats gliding across Lake Mendota. If they’re not piloted by the college-aged, it’s likely these are members of the Mendota Rowing Club, a stalwart presence on the waters around Madison since 1975.

The club has been bringing a wide range of Madison-area people to the sport of rowing and providing a place for athletic and social development for nearly 40 years now. They meet at Bernard’s Boathouse, at the east end of James Madison Park, itself an officially designated Historic Landmark.

The group takes pride in providing rowing opportunities to the public as well as to all its diverse members. Public programs include community-oriented Learn to Row instruction, which take place May through August. Indoor rowing and weekly yoga sessions are also now available.

2014 marks the second year of MRC’s collaboration with the Wisconsin Chapter of the American Parkinson Disease Association (APDA). Rowing instruction and supervised workouts for Parkinson’s patients and their caregivers take place throughout summer 2014 at Mendota Rowing Club.

Whether members are there to learn to race competitively or just to improve technique and fitness, the MRC has a long history of supporting a diverse membership. That has, over time, included many members of our LGBTQ community, two of whom give their rowing stories to us now.

When I was in high school (before the 1970s boom in jogging), my father wanted me to play tennis rather than run track because tennis was a lifetime sport and running was just conditioning for other activities. Unfortunately today I can’t play tennis or do any of the other weight-bearing sports I used to do—basketball and soccer as well as running—because my knees are shot from years of pounding on streets, sidewalks, courts, and hardwood. What I haven’t lost, though, is my desire for a vigorous workout, good competition, and the camaraderie of teammates. So today, I row.

My rowing story begins in 1995, at the end of my first year of graduate school in Madison. I took a learn-to-row class through the Mendota Rowing Club, not because I was looking for a lifetime sport, which rowing is, but because I wanted to be on the water. It was that simple. And I have been on the water, rowing and teaching others to row, ever since.

For me, rowing is a meditative activity. The stroke is fairly simple, which is why beginning rowers can get on the water so quickly. Moving the boat comes from doing that simple activity over and over, not with great fury, but rhythmically, like a dance. Yet rowing is also highly technical: you move parts of your body—your hands, your legs, your torso—in very precise ways at particular moments in the stroke. And everyone in the boat has to do the same thing at the same time. This requires a concentrated mindfulness that has the same effect on me that running once did and that I suspect meditation or yoga has on others.

But there is more to why I row than that. When asked “why,” some rowers will tell you about the pleasure of seeing the sun rise in the morning or the energy boost that comes from starting off the day with an invigorating workout. That’s all nice, but I talk about regattas. It is so cool when, after hours of practice with the same group of rowers, everything clicks at race time and the boat flies down the course. This near-perfect synchronization doesn’t happen at every race—in fact, not even most of them. But when it does, a 50+ women’s four can beat collegiate crews, as mine did several times, reminding all of us of how powerful we can be when we work together.

More important, though, is at regattas we create community. Not only do MRC rowers help each other get on and off the water and cheer for each club boat as it comes to the finish line, but also we hang out together. I still have very vivid memories of the 15–20 people who sat around the campfire circle at the fishing lodge we stayed in during the 2002 Canadian Masters Championships in Kenora, Ontario. I remember the joy of walking in the opening ceremonies at the 2006 World OutGames in Montreal. I look forward to dinner with my teammates in Milwaukee after the head race there in the fall. And while every Head of the Charles regatta in Boston is special, my first one was especially so. I rowed on Saturday morning, had dinner with current and former MRC rowers on Saturday night, and spent a beautiful Sunday afternoon in October sitting on the dock near the finish line with two boat mates, talking for hours while we watched the races. Many of my closest friends are or have been rowers, and some of my best memories come from rowing with them; for that I am forever grateful.

I wasn’t a sporty kid. With the exception of one season each of bowling, soccer, and softball, I mainly tended toward extracurricular activities that involved music. When I went to college, though, I tended to mix things up. I opted out of French and instead took up Russian. I studied a lot of math—previously not my strong suit. And instead of joining orchestra, I decided to try out for the crew team.

I had always spent a lot of time on the water. Sailing, canoeing, chasing frogs in a little row boat on an even littler lake in Northern Wisconsin. Crew seemed like a logical choice. Rowing had always looked so serene—a slender boat coasting on a placid, glass-like body of water. As is true with most things, that serene image is only one part of the picture. It was in the gym, during my first week of college, that I learned what the sport of rowing is really all about: intensity and technique.

First the upperclasswomen taught us some technique—specifically, they taught us to erg (rowing machine). It wasn’t just a matter of pulling on a handle with a chain attached to it, they informed us. There was an order to the body movements and positions.

After they ran through the basics, it was time for our tryouts. It was then that I became familiar with the other hallmark of rowing: intensity. All we had to do was row 1000 meters in as little time as possible. I remember we were all lined up on our ergs, not sure what to expect. Then the test began and the room erupted in noise. Every team member was encouraging, shouting, helping us along. Later I would find out they were basically coxing us all through the test, but at the time it was just noise. But that noise had one, perceptible effect: it made us go fast.

Everything that followed went along with those themes. I loved being on the water, pushing the limits of what I could make my body do, and finding out just how exhausting a race can be when you’ve given it all you have.

Over the years, though, I have experienced another hallmark of rowing: community. My fellow rowers in college were my family. And that tradition continues at Mendota Rowing Club.

Mendota is a rich mix of individuals. The rowers represent a range of ages and occupations outside of rowing. Everyone comes to the club with different backgrounds. Some people have been rowing for years and some people are just beginning. Some left the sport for decades and came back, while others never left. It’s a group of people who want to come together to hone rowing skills, be on the water, and work together to make a boat go fast (preferably very fast on race days). The coaches do a wonderful job maintaining those original elements—intensity and technique—but everyone works together to make Mendota a wonderful community—and an awesome way to start the day.