What Gay Hockey Means To Me 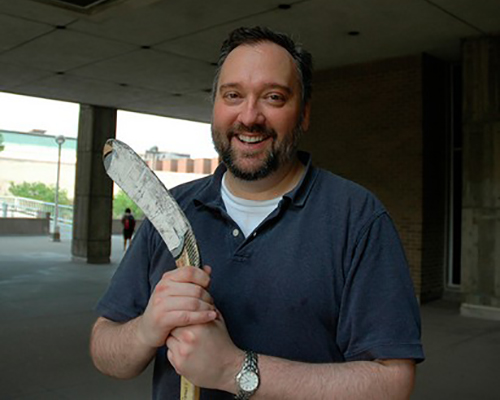 I really do. First of all, there’s so much yapping. Everyone has an opinion on what you should be doing, how you should be playing, and where you should be standing. There is always that guy who wants to coach you, even if he is not the coach. Your captain can devastate you with a look, and he never gives you the chance you need. Singles tennis is much better.

Why, then, has MGHA hockey become arguably the most important thing in my life? And before I continue, I am going to say that I would prefer that you not repeat that to my employers.

I am a 42-year-old gay man from Cookeville, Tennessee, a town and a state not known for their hockey leagues. I grew up in the country with no other children my age nearby, so I did not spend my childhood learning how to play football and how to throw and catch in the neighbors’ yards. I played softball and basketball at recess in elementary school, but only with my closest friends. I could hit and catch, but I could never throw, and if someone not in my group was nearby and made a cutting comment about my inability to get that ball from left field to second base, I was mortified. By the time junior high came around, I tried my best to hide during gym. In high school, I started playing a little tennis, and it was perfect for me—just a coach, an opponent, and me. The only person counting on me was me, and best of all, there was no yapping.

In college as a theater major, I began taking dance classes and discovered an unexpected facility for it. As I took class after class and began performing in dance concerts, I found that my physical abilities in other areas were improving, too. In fact, I went ice-skating twice during this period and found myself doing crossovers for the very first time. I never thought that this facility would go away, but life took many turns, and at some point, I stopped moving and started sitting.

I came to Madison in 2006 to begin work on a doctorate. I had not thought about ice-skating in almost twenty years. I learned of MGHA pretty soon after arriving, but the thought of joining it did not enter my mind. Then some bad things happened.

In December 2006, I contracted HIV. By July of 2007, it had already progressed to AIDS, defying all medical knowledge. My doctors still tell me, “Jeff, your test results never look like anybody else’s.” In August 2007, I developed lymphoma and was admitted to the hospital in September. Word around the halls of UW Health was that I would not be leaving it alive. But then I started to get better. I was to begin chemotherapy in November, but a CT scan showed that my lymph glands were shrinking. Remember what I said about my test results not looking like anybody else’s?

I was not as happy with the news about my remission as one might think. I had a lifetime’s experience with battling depression, and there was a significant part of me that was a bit relieved by this death sentence. I was actually somewhat deflated when I was told that I would be hanging around for awhile. I fell very deeply into despair, and I spent much of the 2007–09 academic years sleeping and staring, gaining weight, and falling behind in my coursework and research. I wanted to go somewhere, but I did not know where. I wanted to do something extraordinary, but I did not know what. I wished a lot of things. I was having a midlife or perhaps an end-of-life crisis. I couldn’t afford a sports car, so what to do? Sometime in 2009, I became a Facebook friend of Patrick Farabaugh, the founder of the Madison Gay Hockey Association. Let me tell you something about Patrick—if you do not want to play hockey, then you should not come to his attention. He sent me an application, harangued me about it for a few weeks, and for some reason—I still don’t know why to this day—I filled it out and sent it in.

I think that maybe I wanted to do something that scared me. Negotiating my days had become scary in a very profound way, and I knew that it would never ever get any less scary. My blood had become toxic. I had been rewritten on the cellular level; I wasn’t even me anymore. I would never be able to conquer it, but hockey was just this thing outside of me. Hockey was a fight I could pick myself. Hockey was way outside this Tennessee boy’s comfort zone. Just showing up to play hockey would be a victory, and maybe—just maybe—winning that little victory would begin to make me feel OK again.

Not to say that my first year in MGHA was all ticker tape and loving cups. No. Remember, team sports have always been difficult for me. My skating was bad. It was as if the capacity for dance and sports that I had developed in my late teens and early twenties had never happened. Furthermore, I had not left my apartment much for a couple of years, and my always sketchy social skills were not the better for it. I have also had a problem fitting in with other gay people. One on one, I am fine, but I have never been anything but awkward in the midst of gay-bar reindeer games. I go into a gay crowd thinking I have to be something I am not. I become awkward and obviously self-conscious. My darn good sense of humor goes into overdrive, and I become too loud, too excessive. Maybe I even become a parody of myself at times.

But at MGHA I found myself on a team that had to take me, no matter what. Sure, there were people who turned away from me—people are, indeed, people. But there were also people who either got what I was going through or just did not care enough to shun me. Michelle Watkins, MGHA’s 2009–10 president, refused to let me quit. She listened to every confused, painful thought I had to share that first year. Dan Grejzcyk drove all the way from Sun Prairie to the west side in the middle of the week and took me to Tenney Pond to stand still and watch me skate for an hour in the cold and helped me fix my stride. Jacob Ela, who has been playing for years and can skate circles around me, purposefully picked me as a partner at practices because he could tell I was struggling and embarrassed. I also met Mark Nessel, who has become my closest friends in Madison, through the MGHA. This season, I talked my other closest friend, Jim Bungert, and his wife Kim Bungert into joining the league, and they are having a great time. Them’s the pearls right there: the people. Goals and assists are awesome, but through this league I have become part of a community for the first time in years. Best of all, I no longer want to rip my skin off every morning when I wake up.

I was shocked and gratified when the Operations Committee for the MGHA asked me to join it after my first year with the league. My primary responsibility in the 2010-11 season was to serve as a liaison between the committee and the new players. It was a privilege to be able to say to some of those new players during the pre-season clinics, “Oh, you can’t quit. Here’s what happened to me. See? You’ll be fine.” That was the best thing about my sophomore season. The second best thing —and it was a distant second—was scoring my first goal.

You will have to drag me kicking and screaming from the MGHA. I’ll be 80, assuming I make it that long, digging my nails into the ice, hanging on for dear life as they try to drag me to the home. That’s because it is dear life. I’m not sure that I would have made it through this dark period without it. This is not hyperbole. The MGHA gave me hope. It gave me a community. It gave me friends—a handful of whom I consider my family. It gave me a new lease on life.

That’s what MGHA means to me: life. I am alive, I am here, and I play hockey.