I was born in 1961, number 10 of 11 children. My father died when I was four, when at least eight of us were still at home. To this day I feel the most alone and unwanted when around the family. I had, however, been having an otherwise pretty normal childhood until we moved to Jackson, Minnesota when I was about 12. It was when my life became a living hell.

I was constantly bullied and eventually started smoking pot, drinking, and skipping class at least four times a day as a means of escape. By the time I was 15 I had become an alcoholic: I would have to drink a pint of Sloe Gin before facing school every day and lots of beer and whiskey at night before I could sleep. No one asked me what was going on or why I was doing these things, they just labeled me a bad kid and mostly ignored me—until I screwed up big. Then I had their attention.

I have come very close to dying three times, twice due to dehydration caused by too much methamphetamine use and once due to my liver failing from HEPB. The second time was in January of 2004, and by March of 2004, only 10% of my liver was functioning.

At 18 I joined the Army to get away from all the pain and to hopefully avoid jail. The Army then proceeded to kick me out for being gay. It was bad enough that I wasn’t good enough for what felt like everyone else in my life, including my family. Then to have my country say the same thing was heartbreaking. I should mention here that going into the barracks in full drag (it was the very first time I did it) probably was not a good idea, though.

From 1981 to 2002 my life was spent being addicted to—well, let’s just say I have quit more drugs than most people have tried. I started doing drag at 19 and found it to be a great way to escape some of the pain in my life. I have had to prostitute myself for food, money and shelter on several occasions. I have lived in my truck. But now I have found a way to turn all that pain and anger into something good.

When I turned 50, I founded Willma’s Fund (through OutReach) to hopefully help other LGBT people that have gone through similar problems avoid having to do what I did to survive.

I now work for The Salvation Army of Dane County. The case workers often comment on how difficult it is to find help for LGBT people, especially transgender people. The shelters here are divided by gender, so transgender people may not be safe in the current shelter system. Shelter staff may be supportive, but often the other clients discriminate against them. Most homeless LGBT people tell me they feel safer on the streets than in the shelters because they do not feel safe around other clients.

I rekindled my passion for performing in drag in December of 2010, and I wanted to use my talents to help the LGBT community and raise awareness about the important issue of LGBT homelessness. I talked to my husband Steve Starkey, who is the Executive Director of OutReach, and he said the organization would serve as the fiscal sponsor for Willma’s Fund. Our first drag show was for my 50th birthday in April 2011, and we raised $1,500 from sponsors, cover charges and donated performers’ tips. 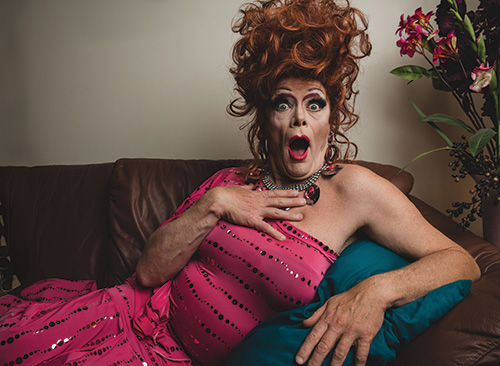 Since then, we’ve raised over $50,000 dollars and helped more than 60 LGBT clients in south central Wisconsin with hotel stays, rent and security deposits, utility and phone bills, gift cards for gas and food, and more.

One early success story was Austin Jones, a young African-
American transwoman. She was fleeing from verbal and racial abuse from her landlord when I met her, but always had a positive outlook on life.

Willma’s Fund and The Salvation Army of Dane County were able to provide her with two months of hotel stays while she found her dream job. She was able to find housing and now supports herself. She wrote a poem for me, entitled Along Came Willma.

In October 2014, a gay client contacted OutReach. He was filing for Social Asylum from Pakistan and needed support. He was habitually persecuted and abused for being gay in his country before he came to the U.S. for school. After his student visa expired, he told the immigration board if they tried to send him back he would kill himself, so at least he would die free.

I connected him to former State Rep. David Clarenbach, who knew people who could help. U.S. Representative Mark Pocan also wrote a letter of support. In January 2015, I took the client to Chicago for three days of immigration meetings, all costs paid by Willma’s Fund. He has since acquired a work visa and works a part time job in Madison.

LGBT youth are at heightened risk of homelessness when they come out to their families, and this can happen at a very young age. National research estimates 35% to 50% of homeless youth under 24 identify as LGBT. They are preyed upon and sexually abused while trying to just survive.

When people say homelessness is solved with a house, that’s true, but what they fail to see is homeless teens may not know how to shop for groceries, clean a house, maintain a budget, schedule their time, make healthy life choices or work a full-time job.

Life skills are important components of success. It is very intimidating for someone to come off the streets or couch surfing and be able to maintain an apartment. I have experienced that overwhelming feeling myself, often feeling more at home on the streets than in a shelter.

However, we don’t just help LGBT youth. We have helped people of all ages, including seniors. It is Willma’s Fund’s hope to offer some stability in peoples’ lives, creating an environment where people thrive. 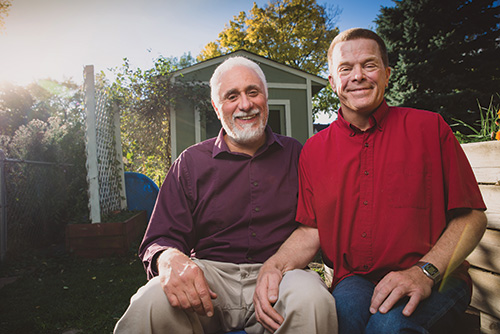