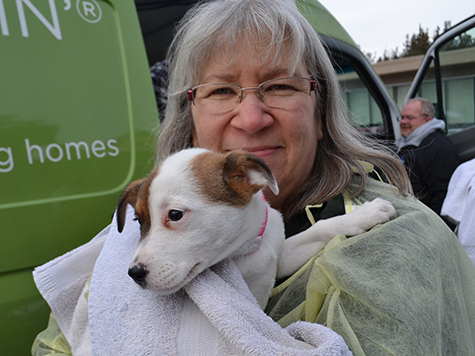 Dane County Humane Society (DCHS), Wisconsin Humane Society (WHS) and other shelters statewide are voicing strong opposition to newly proposed Department of Agriculture, Trade, and Consumer Protection (DATCP) regulations that they believe will have a devastating effect on homeless dogs and Wisconsin families.

DCHS is asking supporters to email Angela Fisher (angela.fisher1@wisconsin.gov) at DATCP with any concerns or feedback about DATCP 10.80(2m) and (2n) before August 7. PLEASE NOTE: You will receive an out-of-office message but the account is still being monitored.

The regulations would require negative brucellosis (Brucella canis) and heartworm tests before homeless dogs can be transported into Wisconsin. Canine brucellosis is a bacterial infection which does not affect lifespan or long-term quality of life, but causes an infection of the reproductive system (i.e. sexually transmitted disease). It is rare in shelters, the transmission risk is very low, and it is not a fatal disease like rabies.

The testing could eliminate our state’s ability to save puppies and dogs from overcrowded shelters or natural disaster zones outside state lines.

Because Brucella canis testing has a high false-positive rate and requires additional time and money, source shelters with already limited funding would likely have to euthanize dogs or transfer them to other states rather than test.

DCHS shares the goal of ensuring the health and wellbeing of dogs, and would welcome the opportunity to work with the state to create common sense regulations that protect Wisconsin animals. The minimal risk of brucellosis transmission does not justify the impact of these broad proposed regulations.

DCHS and WHS anticipates these consequences if the rules are approved:

• Derailed lifesaving pathway for dogs in need. Because most transported dogs come from shelters with few resources, the testing will be a barrier to dogs finding lifesaving transport to Wisconsin. Source shelters will likely have to euthanize otherwise healthy puppies and dogs if they are unable to find placement elsewhere.

• Inaccurate test results. Screening tests for brucellosis produce a false positive at a rate as high as 60%, so testing does not give an accurate picture of a dog’s health status and will block healthy dogs from lifesaving transport to Wisconsin. In addition, many states require dogs who test positive for Brucella canis to be euthanized, so some of these dogs will not actually have the disease and will be needlessly euthanized.

• Overreaction to very little transmission risk. Brucella canis is largely transmitted through sexual contact between dogs and through giving birth. It’s possible for a human to contract it, most often through handling reproductive tissues, but it’s exceedingly rare. DCHS, WHS and coalition shelters spay/neuter dogs prior to adoption, significantly reducing the risk of transmission. Heartworm does not pose a risk to people, and published guidelines by the American Heartworm Society recognize transporting dogs with heartworms as a lifesaving activity and provides guidelines for how to transport heartworm positive dogs to control its spread.

• Impact to Wisconsin’s families. Thousands of Wisconsin families adopt southern puppies and dogs from Wisconsin shelters every year. These dogs enrich their lives every day, and these rules will impact our ability to meet Wisconsin families’ desire for animal companionship, which will drive them to puppy mills and disreputable sources. Wisconsin should not be choosing regulations that have the unintended consequence of supporting these operations and putting dogs and consumers at greater risk.

• Diverting transport to substandard organizations. Irresponsible groups already ignore rules for dog transport across state lines, and these groups are less likely to have practices in place to control disease and to spay/neuter animals prior to placement, which is one of the best tools to prevent the spread of Brucella canis. The new rules will drive transport further underground to substandard organizations, increasing health risks for Wisconsin’s animals.

To voice concerns about DATCP 10.80(2m) and (2n) before August 7, 2019, email Angela Fisher, Program and Policy Analyst, Division of Animal Health – Wisconsin Department of Agriculture, Trade and Consumer Protection at angela.fisher1@wisconsin.gov. PLEASE NOTE: You will receive an out-of-office message but the account is still being monitored.