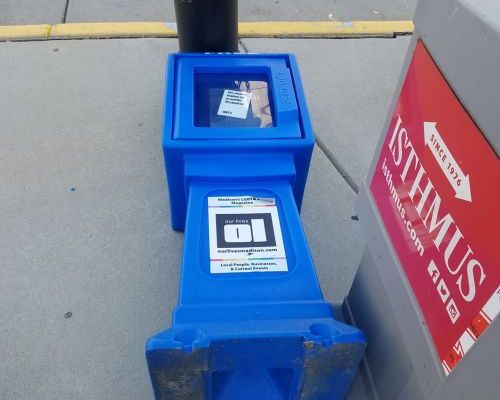 MADISON, WI – Vandalism of Our Lives distribution boxes and magazines has spiked in recent weeks, with a rash of destruction targeting the LGBTQ-focused publication along State Street and the Capitol Square.

Publisher Patrick Farabaugh noted an uptick in the amount of vandalism since the 2016 election in particular, but the incidents have taken on increased frequency this summer. The vandalism includes everything from anti-LGBTQ slurs and messages written on free copies of the magazine, to torn off labels and outright theft of the distribution boxes placed around downtown Madison.

Since the July “Pride” themed issue hit newsstands, Farabaugh, who solely manages the distribution of copies to the sidewalk boxes, says he’s already had to replace seven of the rainbow Our Lives labels, which are regularly torn in half or torn off completely. Two of those replacement labels have been torn off and replaced again in the last few days alone. He has also continued to find almost all of the display copies of the magazine turned upside down, and last week came across one box with all of its issues destroyed by what looked like deliberate water damage.

Farabaugh has been working with the Madison Streets Division and now the police as well to report the problems and seek solutions. City policy is strict when it comes to the appearance and placement of sidewalk boxes and requires owners to immediately clean off any graffiti, among other things. That has become a weekly process for Our Lives, which appears to be the most targeted (and often the only boxes targeted) by vandals.

Police can’t take action unless someone is caught in the act, and recommend a community monitoring approach to help solve the problem.

“Whenever someone sees damage to the box or the copies inside,” Farabaugh asks, “snap a photo with your phone and message it to our Facebook page. This will help us have a timestamp of when the vandalism was discovered, and to identify the location.”

Our Lives is currently the only LGBTQ-specific media in Wisconsin, with a full-time staff of two people (including Editor Emily Mills). Their office on the city’s northside were closed earlier this year as a way to reduce overhead costs for the publication, but also to lower the chance of targeted threats. A rock was thrown through the glass front door of the office in May of 2018, and pro-Trump propaganda was taped to the front door in 2017. Farabaugh and Mills now work remotely, instead. Both express their gratitude for the community support they’ve received in the wake of the attacks and vandalism.

The sidewalk boxes, which provide free copies of the magazine, have been targeted with the following forms of vandalism:

Read more coverage of these incidents from Channel 3000 and Madison365.

Sign up to receive the magazine for free directly to your mailbox here.