A Place for Everyone 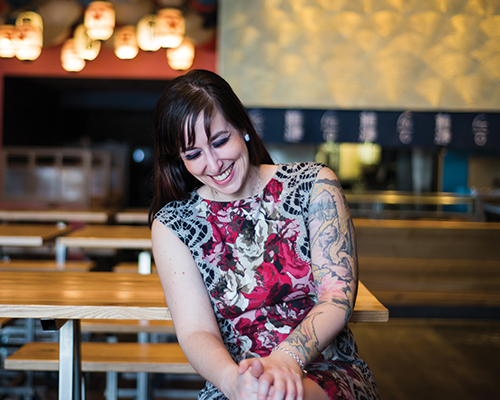 Something unique is happening at Tavernakaya that goes beyond its after-hours night life. Affectionately called “TK” by staff, its culture is making radical hospitality a priority.

It started with Mike Ding and Kai Kuo’s vision of fusing an open, urbane New York style with a Japanese tavern that would fit as a neighborhood joint in downtown Madison. But it was after Ding hired event promoter and general manager Lili Luxe that the late-night scene at Tavernakaya began to grow as a welcoming space on the Capitol Square.

“I love the space, I love the positivity,” said Luxe. “I’ve wanted to do something on the square for a long time, and this was the right fit.”

Luxe worked as a promoter for events in Madison for years at venues like The Cardinal and the Inferno. No matter what the theme—from DJ events to burlesque shows and fetish nights—Luxe put consent culture first. It’s a non-negotiable approach that is baked into all of her work.

She doesn’t believe that problems at a late-night event with alcohol are inevitable. Luxe sets expectations of consent and dialogue up front. In fact, signs at the door in Tavernakaya say “Ask First,” like the national campaign, and even feature the Japanese symbol for “consent.”

“I want every single person who walks in the door to have a good time and follow the Golden Rule Principle,” says Luxe. “It’s about setting expectations, having people rise to them, and being proactive about it versus dealing with a situation when it goes south. Before buying someone a drink or dancing with them or touching them…just ask.”

She has seen how making consent and proactive expectations of “ask first” are key to what makes their late nights safe places that are radically welcoming to the whole community.

Tavernakaya owners and staff buy into this approach to building a safe and welcoming night life, even though it might take more time and communication to build what Luxe calls an investment in caring. TK Culture is a part of hiring and training. Employees and managers are open to a conversation about pronouns and how to identify and eliminate nonconsensual conflict, no matter the gender or size of the bar tab of the people involved.

“When we started, we definitely wanted to have some kind of nightlife,” said Ding. “We asked ‘how can we be a bar and restaurant for the neighborhood…but for EVERYBODY? We weren’t sure we were doing it properly. When Lili first came on, she was an in-house promoter for us and worked to really bring the nightlife to the level we wanted. She understood what the restaurant was about and the values we believed in.

“What makes me happy as a minority business owner is that I can be here on any given night and there are all types of people here and we roll out the red carpet for everybody. Our customers interact with each other. It opens up minds and gets people of different backgrounds to interact with each other and creates a better environment for each other. Whoever you are, you walk in the door, and you feel welcome,” added Ding.

Intellectual Ratchet, for instance, has found something of a home in TK. The networking and social group focused on people of color holds regular dance nights in the space. It also helps that TK doesn’t impose any kind of dress code, which Luxe noted has inherently racist implications.

Tavernakaya opened in December 2015, and Ding persisted through hiccups of HVAC improvements, dealing with a flood that delayed its opening, being tenacious in getting an entertainment license from the Alcohol License Review Committee, and eventually buying out Food Fight’s share in August 2017 to become a truly independent local restaurant.

Many of the same staff still work there as when Tavernakaya opened two years ago—and the restaurant gets consistently positive food reviews. They recently welcomed a new Executive Chef, Bee Khang, who is a Madison native and spent 10 years in the business at Murimoto. Restaurant week this past January was a test run for Bee’s new menu items, but fan favorites won’t change. The emphasis will remain on cross-Asian cuisine, cocktails, and even Japanese craft brews.

“There is definitely something special going on here,” Luxe added.