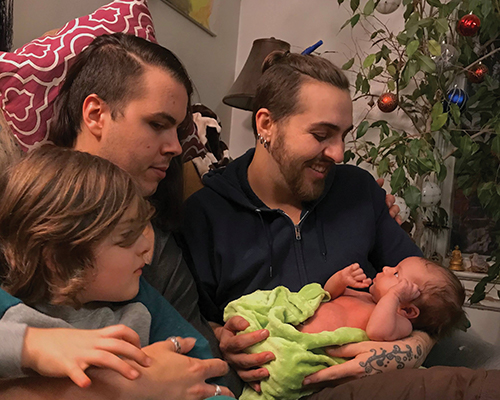 I was laying in the bathtub, attempting to will the contractions to stop. I was completely crushed, disempowered, and defeated. It had been seven days of labor and I was still only two cm dilated. “Why is this happening?!” I kept screaming inside my head. I was so frustrated with my body.

I had so carefully planned this experience. I had so badly wanted it to culminate in a beautiful water birth—my newborn baby lain triumphantly across my chest. But here I was in the bathtub, completely exhausted and emotionally preparing myself for a c-section. I was in tears. I felt like a failure, and the feeling surged with each contraction.

What I needed to find and hold onto was gratitude. I was in my lovely friend’s home, and it had been a total retreat. The home was beautiful, uniquely decorated and enchanting, and she had lovingly stocked it with homemade soaps and salves, as well as premade sandwiches and salads. Everywhere I looked, I felt surrounded by beauty and tremendously cared for. My partner had been completely devoted to me for days now. He was taking on so much responsibility, making sure everything was well taken care of, as I descended into labor pains. He was so supportive, sweet, and kind. It had been so special to me to receive that level of devoted care from him, and I felt more bonded to him than ever before. I felt we were in it together, as he held my hand and I labored in the warm water chanting, “Relax, don’t writhe” to myself.

And while I was so grateful for his tender words, I was struggling not to feel ashamed. I was working up the nerve to tell him that I was opting for a c-section. I knew I would be unconditionally supported by him, but it was a cold and painful finality to say it out loud—to ask him to tell the midwife that this was what I had chosen. To soothe myself, I held all my reasons in my mind. I hadn’t slept for more than half an hour at a time in nearly a week and my body was in agony. I was quickly crashing into a depression. I knew I would need to have energy for the baby once they were finally born. This would be my second c-section, and the long labor could be testing the resolve of my previous scar. It all sounded so valid and official in my mind, yet I was still consumed with anxiety and a profound sense of failure.

When my midwife arrived we talked about my decision, and then we discussed what the surgery would look like. She used her networking skills to hand-craft a surgical dream team that was ready to go the instant we arrived at the hospital. Not every member of the hospital staff could be curated by our midwife, and some of them said some really shitty things. A triage nurse who was first attending to us when we arrived refused to use gender-neutral pronouns with our (at the time) still unborn baby. She acted completely put off that we should expect her to respect our wishes, and went out of her way to make several snippy, ignorant comments while the other staff prepared me for surgery. I watched the other staff members look at her in shock, but none of them were willing to call her out on it. That was my first reminder of why I wanted a homebirth. Even though the hospital was going above and beyond for us, and I was about to receive excellent surgical care, I already felt vulnerable and unsafe. I was so grateful that my midwife was there. She was so protective and stayed by our side for the entire surgery.

During my last c-section, there was no opportunity to watch my baby’s birth. However, this time there was a small screen available to me if I wanted to watch the procedure. While I had no desire to see myself opened up or closed, I absolutely wanted to see the moment the baby was delivered. The moment I saw my baby’s face, my eyes filled with tears. As they lifted my baby out of me, I watched them open their mouth and then I heard them cry. Even though I’d carried them for nine months inside me, and I’d felt them hiccup, kick and roll around, nothing could compare to that moment. I’d created a new human being, and I could hear them crying. I was overwhelmed with emotion.

Shortly thereafter, my husband brought the baby over to show me; I couldn’t hold them yet as I was still being closed back up. The baby was so beautiful. I could not believe the sweet perfection of their tiny little face. I kept looking back and forth between my husband and the baby. I was equally enthralled with both. Never before have I seen my husband look at anyone the way he was looking down at our newborn. I was flooded with such love and happiness. It was one of the most wonderful things I’ve ever seen.

I spent some time in intensive care immediately following the surgery, and that’s when I was allowed to hold my baby for the first time. The spinal tap had barely started to wear off and I didn’t have full control of my arms yet. They had to use pillows to prop me up as I was prepared to finally touch my newborn. The baby was so peaceful and calm, with one foot in this world and the other still in the realm from which they came. We looked and looked at each other, and I got lost in the intensity of their eye contact. I could not believe this moment had finally come; I was immediately in love with the baby, and all I wanted to do was hold them.

While the hospital staff tried their best, we were still met with an anxiety-producing level of ignorance. I had a nurse come to take my blood the morning after my c-section. I was lying in bed, in a hospital gown, with an IV and a catheter visibly hooked up to me. I was holding my baby. She began our interaction by asking me where mom was. I responded by telling her the baby was mine. She rolled her eyes and asked me where my wife was. I had to tell this woman that the baby came out of my body. She then recoiled and said not another word to me while she drew my blood and left. Yuck. So, I pulled out all the stops. I took myself off painkillers immediately, and proved that I could stand up and move around. I wanted to get out of the hospital as fast as possible. In fact, I managed to stay less than 36 hours!

Since then, I’ve been at home ruminating, recovering, and adjusting to life with our new baby. I haven’t had much time or mind space to process the experience just yet, but it’s coming in waves. I am finding acceptance for my body and acceptance for how our baby found their way into the world. I’ve let go of feeling like a failure, and I’m overwhelmed with gratitude. This baby is so amazing. They light up when touched or spoken to, and they smile, coo, and gurgle in their sleep. They’re fascinated with their hands and arms, and they love to delicately wave them in front of their face. We are so blessed, and I am so thankful.