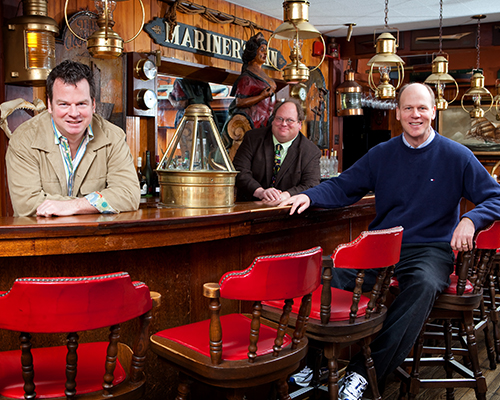 Have you ever felt you are exactly where you are supposed to be at a given moment in time? That could describe my life now. I am in the right place at the right time and so very fortunate to be here. That was certainly not the case when I moved back to Madison ten years ago.

I had been away from Madison for 16 years and had never lived here as an adult. In 1999 I was living a great life in Manhattan. Dream job, great partner, beautiful apartment. I was thirty-three and thought I had it all. It all changed pretty fast. A new CEO made my job absolutely miserable. My partner was diagnosed with leukemia and was dead within three months. Starting to realize what was most important I quit my job to be with him before he died. Very soon it became no work, no man, just me alone in the apartment. Not a good combination. Very bad.

A dear friend from Madison who also had a place in Manhattan could see just how much I was struggling with my grief and depression. When he got back to Madison he phoned my brothers and a plan was made to get me out of the city and back to my family to heal.

The Brothers to the Rescue

My brothers Jack and Bill are just a tub of love and have always looked out for their “baby” brother. They may think I am a bit eccentric but their love and support has never wavered since I came out as a teenager. When my mom died they sort of became my parents.

I don’t think they were prepared for what came back to them in the winter of 2000. I was a shell of my former self. Grief and depression had taken hold of me, and I was lost somewhere inside. They had always known me to be outgoing, adventurous, and creative. I was the crazy younger brother who traveled the world, lived in Australia, was a Peace Corps volunteer in West Africa, then came back to the States and climbed the corporate ladder in Chicago and New York City. When I got off the plane I was none of those. I was mostly a saddened, broken man.

The first two years back are just a fog. If I met you during that time I do not remember. Most days it was a challenge just to get out of bed. My brother Jack would come to my apartment and force me to go to work as a bartender at one of the restaurants. Sometimes he would have to push me in the shower. The only thing I did accomplish during that time was two AIDS Rides from Minneapolis to Chicago. The first one I did was all about my grief and so many wonderful people were there for me. Everyone has an AIDS Ride story. The second year it was nice to be there for others.

As I slowly returned to good health, I realized that I did not want to go back to an empty apartment in New York. But what did I want to do? I grew up in the restaurant business (my parents bought the Mariner’s Inn when I was three months old). I never even considered it as a profession. I remember my parents working extremely hard. Was this even something to consider? I had not bartended since my early twenties and bartending at the Nau-Ti-Gal is a quite a bit different from bartending at Roscoe’s in college. But, I slowly began to realize this food thing is in my blood. It helped that every day I had living examples in my brothers. They really love what they do. They are men of integrity. They always put their families first. They enjoy life. They know what matters most.

A Decision Is Made

My brothers had always been equal partners in the business while I was off doing my own thing. When my mom died, they purchased the business from my father with my blessing. I never thought I would live in Madison, and I knew I would never leave the corporate world—certainly never work in a restaurant. I had absolutely no interest in working in the family business. Time is a funny thing. I should never have said “never.” After I had been working for them for two years, we started the discussion about me possibly staying around a while. Much to my surprise, I was offered the opportunity to buy into the business and be an equal partner. Now not only had they helped me, emotionally and physically, they were giving me an incredible gift professionally.

So now we are equal partners. We expanded Betty Lou Cruises from one boat on one lake to four boats on two lakes. I bought a tiny bungalow. I had always lived in apartment buildings or lofts, but having a house and land in Madison now felt right. I turned 40, did the Ironman, and reflected a lot. Something was still missing. I just was not being fulfilled creatively. Then the light bulb finally went on. I could be creative with food. I love to eat. I saw how much fun my friends Marcia Castro and Patrick O’Halloran had in the kitchen and how passionate they were about food when we traveled together to Tucson for the food and wine festival. I decided I needed to go to culinary school. It turns out Madison has one of the best culinary schools in the county right here at MATC. I enrolled and will most likely graduate this year.

My schedule is quite grueling but I pretty much love everything I do. I am able to spend time with friends and family. I consider my customers and employees friends. I am able to give back to the community: if not by volunteering my time, I contribute financially as much as I possibly can. Being surrounded by all the young people at MATC and realizing that they will be our future, I am hopeful. It was a strange un-chosen journey that brought me to this place in life, but for whatever reason, I am here in Madison with my brothers and new friends. I am definitely in the right place at the right time.

Robert von Rutenberg and his brothers Jack and Bill are co-owners of The Mariner’s Inn, The Nau-Ti-Gal, Captain Bill’s, and Betty Lou Cruises. Most nights you can find one of them at their restaurants, and in summer they will occasionally stow away on a cruise or two.