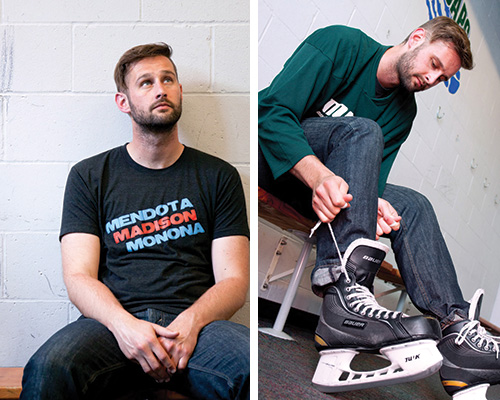 The leaves were copper colored with a hint of yellow and the sky was dancing with the most brilliant orange. My windows were down, and the smell of fall hung heavy in the air. I drove slowly, taking in a moment that I knew would be revered for many years to come. As I peered out my windshield, the trees so tightly rooted along the lake pulled back like the opening of a curtain before a much anticipated play. Towering before me like a glowing lighthouse atop a hill, the Capitol greeted me, a sight that, to me, represented freedom and new beginnings. Under its protective glow, lying in bed for the first time that night, I felt at peace. The weight on my chest momentarily lifted, I felt more alive than I had ever had.

I fled to Madison in a moment of internal desperation, seeking desperately to find a place in the world where I belonged. A place where breathing was natural and didn’t take concentration or effort. Although I survived the southern culture of my adolescence and early adulthood, the over exaggerated smile in many pictures was only a constant reminder of how empty I truly felt inside. Suffocating under the weight of my own insecurities and fear of exposure, I fled. Little did I know that what awaited me was a salvation greater than what any little backwoods conservative church could provide. I found me, and I was saved.

During my first week in Madison, I paraded around as an invasive tourist. I made Devil’s Lake, the Terrace, and the Capitol Square my playgrounds. I gazed upon thousands of faces, each of whom had the potential to be my new best friend. I stood in awe as I watched two women walk around the square with a stroller and a set of newborn twins. I then caught myself gazing awkwardly as two young men embraced before exchanging a soft, delicate kiss outside a restaurant on State Street. I felt nervous for them, as I anticipated slang and gestures being hollered from the street. When no such reaction came, I knew Madison was home.

Later that night, as my newly found roommates and I were out for a drink, I was asked the dreadful question, “Are you single?” A question I loathed. And so, when the conversation turned to girls, as it had each time before, I played along like I had my entire life. In that moment, I witnessed my paradise crumble under the weight of my own lies. My insecurities had followed me to Madison, and it was still poisoning my very existence.

It took eight months from the day that I arrived in Madison to make any effort toward becoming a part of the community that I so desperately needed and yet feared to know. As a person who knew very few individuals who identified as LGBTQ, my perception was tainted by the southern slang I had heard so often and the societal stereotypes portrayed on television. An athlete from a very young age, my perception of the LGBTQ community did not match my perception of myself. In the midst of this 24-year-long identity crisis, I discovered (via Google) the Madison Gay Hockey Association late one night. My first thought was, “Gays don’t play hockey.” And yet again, there I was, an athlete myself, ascribing a societal stereotype that I knew I did not fit.

As I gazed at the endless mosaic of faces on the “players” page I was comforted by the notion that I was not alone. Although I knew no one in the league and was completely oblivious to their lives, I felt an instant connection. These individuals loved sports, played hockey, and had a shared experience that not even my best friends could understand. I was desperate to play.

The first night felt like the first day of school: awkward. The only knowledge of skating I had was the Mighty Ducks VHS trilogy that I wore out as a child. I was so nervous about playing hockey that the idea that all the individuals on the ice were LGBTQ became a second thought. My main objective was simply “don’t fall.” Looking back, I forced myself to focus solely on the sport. A defense mechanism I’m sure, aimed at shielding myself from my true motives of just pining to be a part of the community. It wasn’t until a month later that I recognized that I was going to learn more from the people off the ice than I was going to learn about hockey on the ice.

Gay, straight, bi, lesbian, and/or trans*, regardless of the label, I had no more reasons hide. For the first time, for a few hours on Sunday nights, I was able to take off my mask and be me for the first time in public. It did not take long for those Sunday nights to turn into community gatherings, hockey tournaments, and weekend getaways. The individuals I met through the MGHA were becoming lifelong friends, and they were hearing my voice like no one had before them. Hockey, although important, was merely the conduit that brought me a community. Something I desperately needed.

We as individuals believe we are strong. That we, through all the trials and constant reminders of being a minority, will overcome. More often than not we believe we can do it alone. We internally rationalize our own humanity and then live our lives like we were destined to do. However, without a community to keep us strong, to share mutual experiences, and grow in our journeys together, we crumble. It was Madison that saved my life, but more important, it was the MGHA that gave me a voice. By sharing this experience with my teammates, on and off the ice, I am a stronger person. I am more confident than I have ever been and for the first time can honestly say, “I am proud of who I am.”