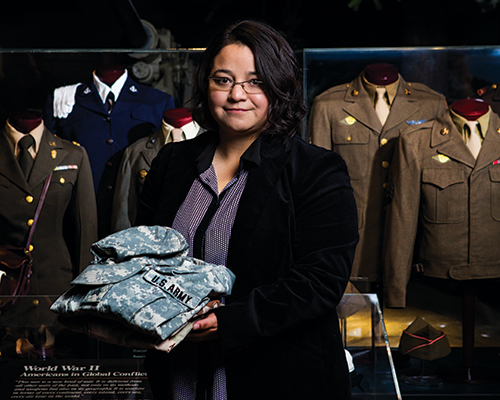 Long before I laced up my combat boots and joined the Army, and even longer before I experienced my first Pride Festival, I learned that my art would be the driving force of my existence.

Monumental life experiences that I recall include the fastball to the head that ended my Junior Olympic softball career; the accident that left my mother a quadriplegic and then my ensuing abandonment of her to pursue a career in theater; the moment I quit my NCAA mascot career over gender biases; the moment I chose to join the Army after September 11, 2001; and the moments when I came out to my family.

I do not speak of these experiences to be self-indulgent; rather, I share them as reference to the path that has led to what I am doing now as an artist and founder of the Veteran Print Project.

The Veteran Print Project brings veterans and artists together to share in the veteran’s experiences through a fine art print. It is an opportunity to bridge the gap between veteran and civilian by offering a focal point (the print) to encourage a collaborative effort of historical storytelling. The process is simple: a veteran meets an artist. A conversation happens. A print is made. The community is brought into the discussion through the exhibition of the artwork and influential stories. The Project, in its third year, continues to gain strength through its simplicity, but its journey has not been so simple.

Follow the signs or fall off of the cliff

After years in the Army and two deployments to Iraq, I entered back into college life as an art student. I had made a name for myself in the 101st Airborne Division painting murals for my commanding officers, including General David Petraeus. At the end of my tenure I had painted more than 30 murals, which included three sets of helipads that ranged in sizes up to 30’ x 60’. I had mastered the art of compromise and improvisation using rudimentary tools and mediocre paint. I never wanted to create another unit crest or military emblem again.

“No more military subject matter.” That was the motto I entered art school with, and I was determined to make it so. I worked diligently to avoid the subject matter at all costs. The cost was high, however, as I felt my creativity lacking and my motivation weak. Military innuendo kept creeping into my work no matter how hard I tried to avoid it. I had to make a decision to embrace the muse and get it out of my system or to deny it and find myself stunted for an inconceivable amount of time.

When I embraced the military subject matter, things started to take off, and art was once again flowing through my veins. I found metaphor and catharsis with each thing I did, and I looked forward to the class critiques to discuss my process and obtain feedback. In those critiques, however, I realized there was a disconnect between me and my fellow students. I was much older not only in age, but also in experience.  At first, they responded with interest, but that eventually led to blank stares. I grew frustrated by the lack of interest from a group of youth who did not seem to acknowledge the fact that our country had been at war for nearly 10 years in two regions. I began to withdraw and become isolated. I found consolation in my student veteran organization, where other returning vets were experiencing the same isolation. We understood one another, and we created a community that no longer needed the acceptance from those who just couldn’t understand what we had been through and who we were.

Telling your story with no audience is mere ephemera

It didn’t take long for me to realize that isolation only led to a greater disconnect and muted my story. I had to find a way to tell not only my story, but also the stories of my fellow vets. And I needed to find a way to encourage civilians to be interested. Thus, the Veteran Print Project was born. Through the development of the project, I have learned several key lessons:

1. It’s important that artist and veteran engage in a conversation to encourage discourse from both points of view, and politics should not play a significant role. There is only one rule in VPP: This is NOT a political opportunity.

2. Traditional printmaking techniques are the only allowed mediums because of their ability to create multiples, and because the process itself mimics military disciplines.

3. No Art Therapy: As a veteran, it often feels like everyone is trying to fix you. Though the Veteran Print Project embraces the healing factor, our mission does not seek it out.

4. You cannot compare trauma. That statement is one of the greatest lessons learned from this project. The importance in bridging the gap between veteran and civilian is to validate the experiences of both parties. A civilian may not understand what it is like in combat, but that does not mean that he or she doesn’t understand trauma. The creation of the portrait provides a conduit for open discourse so that participants can exchange experiences without feeling like there is an ulterior motive.

Looking within, reaching out

The key factors that I have taken away from working with veterans mimic experiences I have encountered in the LGBTQ community. We often choose to isolate and to exist within our own established communities because it is comfortable and safe. We find comfort in the common experience of concealing our true selves for the sake of society’s status quo. Sometimes we choose not to engage in dialogue with those who reject our lifestyle because we automatically assume that they do not understand.

However, sometimes that dialogue may result in another person’s new understanding. I created the Veteran Print Project to draw me out of my veteran isolation. For the last seven years I have had the wisdom of my partner, Denita, to guide me in the important lessons of living an out lifestyle, and she has gradually drawn me out of the isolation that I so often define as privacy. By living honestly, every day, we energize the idea that the LGBTQ community is not much different, if at all, from everyone else. In fact, we are often far less queer than our society’s depiction of us. But we must first introduce ourselves and allow discourse to exist.

In the months to come I would like to host a Veteran Print Project that features the stories of our LGBTQ veterans. This, I believe, will assist those of us who encounter two types of isolated life, often at the same time. We must tell our story. We must engage in discourse with communities outside of our own. Perhaps this will assist me in confronting my own demons as well. Perhaps it will give me the strength to demand my partner’s presence at the next military gala or function where I am the keynote speaker or special guest. The Veteran Print Project has taught me that we all have those monumental life experiences that linger in the depths of our psyche. Individual experience is unique to one’s self, but common experiences are universal and filled with imagery that draws out the patterns of our lives.

We all have stories to tell. By giving someone a forum to have a conversation, we open up the possibility that we may find common ground or a new perspective. I believe in the power that art has to accomplish this.