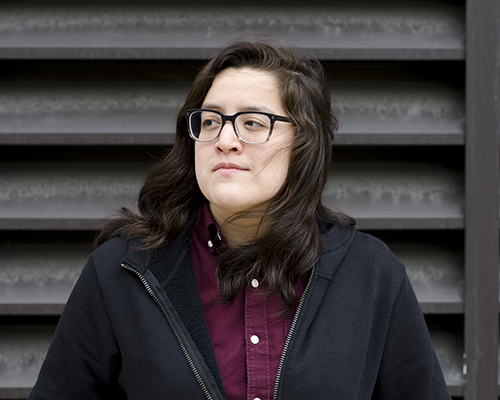 I’m a queer Latinx born in Houston, Texas, raised in Milwaukee, with roots in both. As a teenager, I felt like I was always code switching from one setting to another (geographically and otherwise). Growing up, I had always been marked as “different”—for being shy, for being too “Americanized,” for dressing a certain way.

I knew deep down inside, coming out would be much more difficult than trying to talk my mom into letting me dye my hair green or getting a nose ring. I knew that something else was different about me, because I had already realized that I liked girls when I was about nine years old. I wasn’t ashamed of my queerness or my sexuality once I “came out” to myself at 16. Instead, the dread of being confronted by my family members who called the Bible Belt home always simmered in my head, and being marked as different for so long was wearing me down. I figured that blending in, at least until I finished high school, was the better option, rather than telling everyone I was gay and having that be one more thing about myself that I had to defend or explain away.

I was 19 when that moment finally came, and it certainly wasn’t the teary-eyed sitcom scene anyone would’ve wished for. I fumbled the opportunity I had been waiting for for the longest time, and it was only because my mom kept pressing for answers that the subject even came up (her suspicions were at an all-time high). It got quiet and super awkward for the next couple of days any time the subject came up.

Once the initial surprise wore off, though, my parents ended the spell with a hug and an “I love you.” They didn’t reject me, and I still had a place to call home—which I know are two of the biggest things at stake when a queer youth decides to tell a caretaker, guardian, or parent who they are. The reality is also that we never just “come out” once—it’s repeated over and over as time goes on and as people come in and out of our lives.

From then on, I knew I never wanted to hide any part of my identity ever again. A lot of the times, code switching can translate to self-preservation or can mean safety from harassment or violence, but the work that I do as an LGBT Youth Advocate and as an openly queer adult consists of creating an affirming space that celebrates all the facets and intersections of everyone’s identities. It also means creating a support system for queer, trans, gender non-conforming people of color and people of all abilities and backgrounds, whom I know may not have that at home, at school, or in their day-to-day lives.

Our work as advocates and as adults who have the opportunity to work with and meet LGBTQ youth is all the more crucial now, considering the administration that we live under and how it actively works to deny trans and queer youth, low-income, immigrant and undocumented communities, and disabled folks any agency or justice. And while we live in an increasingly dangerous political climate, I know that the messages we send as adults who work with LGBTQ youth become all the more important in order to create spaces for long-term change in a world that works to silence us and erase us.

I moved back to Milwaukee last fall after having been in New York for four years, and I was determined to take what I had learned from my mentors and friends to continue the work here in the Midwest, especially after the attack in Orlando last summer.

I came across the Milwaukee LGBT Community Center and was set on working with a team of like-minded folks dedicated to working with and advocating for the LGBTQ community. My long-term goal is to ensure that LGBTQ youth feel empowered enough to make a difference in their own communities and break down the borders in our society—whether that means starting a GSA at their school, organizing and challenging anti-LGBTQ policies, or fighting for all-gender restrooms on campus.