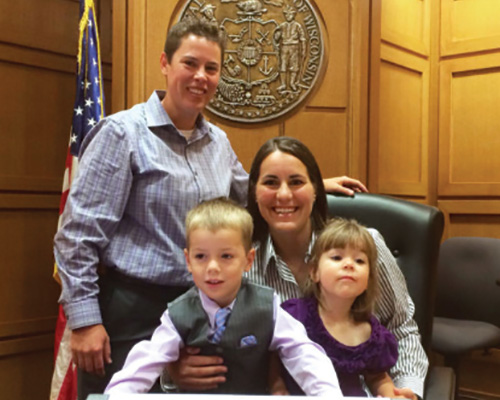 Here’s what happens when one writes an article about legal issues focusing on LGBT people: everything changes right before the deadline. As you are probably aware, on Monday, October 6, the U.S. Supreme Court declined to accept review of Wolf v. Walker, meaning that we now have marriage equality in Wisconsin! While it will take some time for state agencies and officials to change forms and procedures to adapt to the new legal reality, over the next several weeks we should start to see real progress.

This article was originally written to address specifics regarding protection of children in the then-existing legal environment. Even with this recent victory, much of the analysis and advice remains the same.

Concern for families and children permeated the 7th Circuit’s thrashing of the State of Wisconsin’s argument in favor of maintaining the discriminatory marriage amendment, with Judge Posner writing:

Formally, these cases are about discrimination against the small homosexual minority in the United States. But at a deeper level, as we shall see, they are about the welfare of American children.

So now that we have marriage equality, where do we go from here to try to address equal protection of our children, which, despite its prominence in the decisions so far, has not been a specific target of litigation? Though many protections for children flow from marriage, Wisconsin law carries some specific statutes that must be addressed to establish such protection. Rather than sit back passively to see how protections may eventually flow from marriage, some people have directly addressed Wisconsin statutes.

As just one example, I recently obtained same-sex stepparent adoptions for two couples: one married in Iowa and one married in Wisconsin during the brief “window” during which marriages were performed. These adoptions required two elements: first, recognition that the parties’ marriages were lawful; second, that Wisconsin adoption statutes that reference the terms “husband,” “wife,” and “spouse” could not be used to impede the stepparent adoptions. Stepparent adoptions are less costly and less burdensome than traditional adoptions and some other forms of legal protections that attorneys have fashioned over the years.

In one of the two adoptions, we filed a direct challenge to the statutes and to the anti-equality marriage amendment. We specifically invited the Wisconsin Department of Justice to intervene as is required when parties are challenging the constitutionality of a law. As is their prerogative, the Department of Justice declined to be involved in the adoption process.

The decision not to intervene was, in my view, a tactical one from the State. The only way to establish precedent that must be followed by other courts in Wisconsin is to have a case go to the court of appeals or the Supreme Court. If, as was the case here, the adoptions were granted, who would appeal? On the other hand, if they are so convinced that gay marriage is harmful to children (as they very poorly argued in the Wolf case), wouldn’t intervention in this case be necessary to protect the children? Unsurprisingly, neither Attorney General J.B. Van Hollen nor Governor Walker, who has repeatedly said he does not support marriage equality, were willing to respond to numerous media requests for comment. The question is quite simple: does the State of Wisconsin support or deny equal protection for children raised in same-sex families?

We won’t have full equality until we no longer have to “adopt” our own children. In Wisconsin, if a child is born during a marriage, both the husband and wife are automatically granted full parental rights to the child. This is true even if the child is not biologically related to one or both of the spouses (e.g., via artificial insemination or via an affair). This is called “the marital presumption.” To establish full equality, we will have to obtain legal recognition of the same status with married same-sex spouses. That is, children born to or adopted during a marriage are automatically given equal legal protection with both parents, with no need to go to court or pay for an adoption. In the next several weeks, we anticipate filing legal documents to try to establish legal equality without the need to adopt.

We also need to consider alternative approaches for families who choose not to be married or who had children prior to marriage. Unmarried heterosexuals establish legal rights and protections under “paternity” statutes. At least one judge has recently been persuaded to enter the corollary order for women, in essence establishing a “maternity” action. This brings up a host of issues such as surrogacy laws (Wisconsin has none) and termination of parental rights for sperm or egg donors. While we have made extraordinary progress, we still continue to work hard to achieve equality.

It is time though for the State of Wisconsin to answer the simple question: do our children deserve equal protection under the law? I believe the answer from the courts and from the people of Wisconsin is a resounding “yes.”

Michele Perreault is an attorney for DeWitt Ross & Stevens. Recently, she’s presented “Protecting Children of Gay and Lesbian Families: Challenges, Opportunities, and Where We go From Here.”