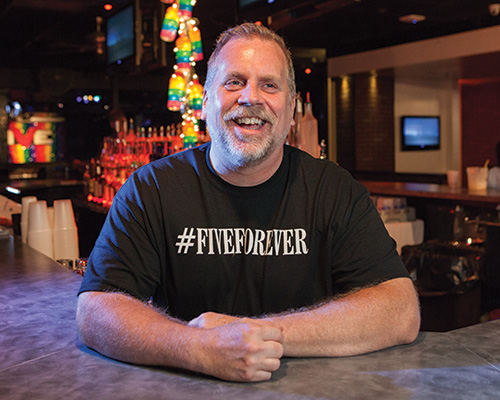 The cards and personal letters lining the walls of Dave Eick’s office at Five Nightclub remind him daily of what his beloved club means to the LGBT community and its allies. They’re from people near and far who wrote to support the #FIVEForever fundraising campaign that saved the club earlier this year.

When he announced on April 14 via Facebook that he planned to close the club for financial reasons, Eick didn’t expect the outpouring of community support that followed. “People traveled distances to share stories, stop in for an afternoon visit, or just to shed some tears and shake my hand and tell me they were here to fight with me to save it,” he remembers.

The stories all touched and humbled him, but a few stand out for Eick, including that of a grandfather who drove more than 80 miles from Mauston. “He handed me some cash and said he felt he needed to make the trip,” says Eick. “His two grandsons are gay, and even though they live in Texas, he felt it necessary to help out other young gay people here who need places like this.”

From the moment Eick hit “post” on Facebook the community was abuzz with face-to-face and cyber commentary, from “It can’t be true, can it? I was just there last night,” to “I had heard something was up and all the pictures of ‘RuPaul’s Drag Race’ queens were taken off the walls.”

Patrons past and present mobilized, asking Eick how they could help save Five Nightclub, which for many was one of the few safe places where they could be themselves. The club had been a refuge for Eick when he’d first nervously walked in 13 years earlier to be warmly greeted by then-owner Ed Grunewald. Gratified that he’d been able to maintain the safe-haven environment Grunewald had created—and that Eick had helmed since Grunewald’s untimely death in 2008—he decided to fight for the club.

He ordered #FIVEForever T-shirts—which were hugely popular—friend Brian Ponce created a GoFundMe donation page, drag queens volunteered for benefit shows, and a group held a carwash/pizza fundraiser. Legions of other supporters proposed ideas for attracting funds, some of which panned out and others that were, shall we say, a little out there, but appreciated nonetheless.

Money flooded in. “I didn’t expect such support, but I’ll be forever grateful for it,” Eick says. “People handed me fives, tens, or whatever, and some just hugged me and said, ‘Please save our home.’ There are too many to mention, but each one was touching and will be forever in my mind.”

On April 26, an epically packed night at Five Nightclub, Eick was able to announce that he’d reached his $40,000 fundraising goal and that the club would stay open. He spoke moving words that brought tears to many eyes. “I am so proud to announce that because of you…all of you, from those buying a soda to those making donations, you have turned what I had imagined for months as one of the worst days in my life and a very sad day for many into an unreal and historic celebration.”

Amidst the deafening roar of the jubilant crowd a small-business owner from Oshkosh leapt on stage to hug Eick. “He told me he understood the struggles of a small-business owner, and after what he’d seen and heard, he wanted to be part of supporting another small business,” Eick recounts. “From that hug I knew he also had experienced the same struggles. If helping us somehow gave him faith in his business, it was great.”

Knowing he needed an updated business model to thrive in today’s dynamic marketplace, Eick met with consultants to develop a strategic plan. Consequently, he added several key people to “handle aspects of the business that were draining my attention from focusing on the big picture.”

And first and foremost came the rebuilding of staff ranks and preparing for summer volleyball, which—as usual—attracted numerous enthusiastic players and spectators. He’s bringing back the big theme parties so many had asked for; the Fourth of July, Circus, and Christmas in July events were all a resounding success.

As of early August, Eick was planning to launch other improved offerings over the coming months. “The business model is evolving into more of what the community told me they’re looking for, so the club can better serve everyone,” he explains.

“We’re adding two new exciting elements to FIVE that I feel will really help change up the current business model as well as allow people from the community a space for private groups, parties, and events, while still allowing us to serve our customer base without interruption,” he adds. “Cosmetically, the changes will begin inside the club at the end of August and hopefully by mid-October, a brighter, more welcoming space will greet all of our customers.”

As for the future? “The community handed me the keys and I have the responsibility now to turn their faith and ideas into something that Madison can enjoy for an extended future,” says Eick. “It’s my intention to turn FIVE into an environment where everyone—LGBT, straight, Latino, young, more seasoned—feel welcome and want to come enjoy an evening that’s anything but ordinary.”

Judy Dahl is owner and principal of JKD Communications, which provides freelance writing and editing services to clients such as Madison magazine, Credit Union National Association, AIDS Network, and the Greater Madison Chamber of Commerce. She has two NYC-based daughters and two canine interns and is proud to have completed the 300-mile ACT 12 bike ride last year.